Authorities say man was walking on edge of cliff and was thought to be carrying weapons
Nov 19, 2019 4:50 AM By: Brandon Barrett 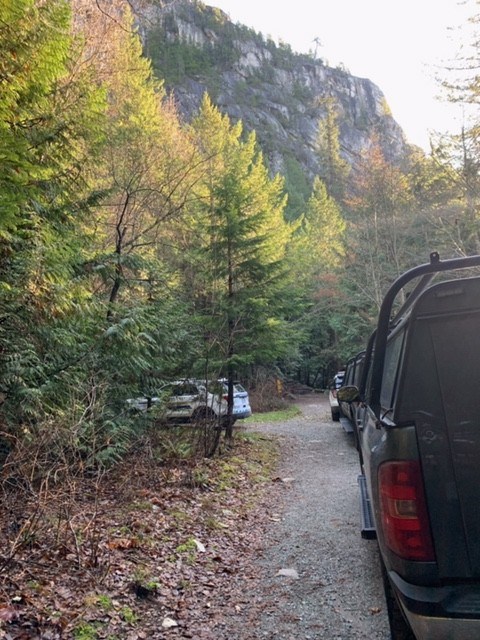 Police and emergency personnel from the Lower Mainland attended the Stawamus Chief earlier today after a man who appeared to be in mental distress and was thought to be carrying weapons was seen walking on the edge of a cliff. Photo courtesy of Squamish RCMP

UPDATE: Authorities have apprehended a man who appeared to be having "a mental health crisis" on the Stawamus Chief earlier today, RCMP has confirmed in a release.

At about 10:45 a.m., Squamish RCMP was alerted by a hiker of the man, who police said was seen walking on the edge of a cliff and was believed to have weapons on him.

Police attended the area with members of the Lower Mainland Emergency Response Team (LMD ERT) in tow. Authorities climbed the first peak of the Chief in police gear in order to "assess the risk to those in the area and make contact with the male," police said.

At 12:30 p.m., the man was located and apprehended without incident, police said, noting that the LMD ERT team assisted in getting those involved down safely.

"We would like to thank the public and the media for avoiding the area while our teams ensured the safety of all those on the Stawamus Chief," said Sgt. Sascha Banks in the release. "Our geographic area can be extremely technical and challenging for a police response and we are lucky to draw from the expertise of the LMD ERT speciality teams for these exact type of calls."

Under the Mental Health Act, individuals in distress can be apprehended by police to be taken to a medical professional for assessment.

There was a heavy police presence in the area while the incident was ongoing. Police advised the public to stay away from the area and refrain from posting photos of the location of the responding police and emergency personnel.

-With files from Megan Lalonde