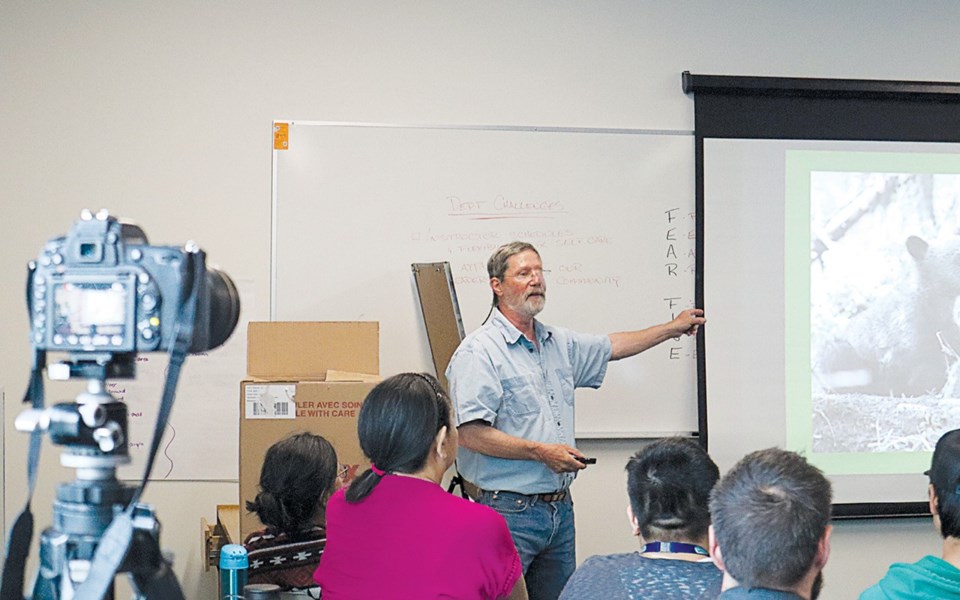 Given the slow and somewhat uneven recovery of the Sea to Sky region's grizzly bear population, it was no surprise that a classroom in the Lil'wat Nation's new Ts'zil Learning Centre was packed for Michael Proctor's May 27 talk.

As head of the Trans-Border Grizzly Bear Project, Proctor has worked extensively with a team of international wildlife biologists and conservationists to recover fragmented grizzly bear populations in the south Selkirk and south Purcell mountain ranges.

In a lively presentation, he discussed his journey from "a hippie living out in the middle of nowhere" to a highly regarded expert celebrated for his enterprising nature.

After obtaining his undergraduate degree in his 40s, Proctor went on to study the movement patterns of grizzlies in the East Kootenays as part of his PhD studies.

Using DNA sampling, he was able to map out boundaries for discreet grizzly bear populations.

Some of the units were fragmented due in large part to human habitation and roads.

"We are left with what I call a 'cracked windshield,'" said Proctor. "It's not broken, but it's got all these cracks in it."

After finishing his PhD studies in 2003, Proctor decided to focus his efforts on repairing that "cracked windshield," creating linkages between fragmented populations.

"I thought, instead of just being a scientist that moves on to the next problem, I'm going to actually try to solve (the issue)," said Proctor. "I just kind of dug in and created a job in my backyard."

With the support of various conservation groups, Proctor has worked closely with the region's conservation officers to promote grizzly bear relocation.

"I had to get their bosses and the policy makers to decide to let them do it," explained Proctor. "We had a couple meetings and they said 'yes, we are willing to do that.'"

With the help of the conservation officers, Proctor has placed radio collars on many grizzlies, allowing him to further follow their movements and learn more about where the best linkage areas are.

"It's not (conservation's) mandate to radio collar the bears, but (they) are very interested in conservation and techniques that get us out of the revolving door of conflict," said Proctor.

To help address the issue of bear attractants, Procter has worked with farmers on a successful electric-fencing initiative.

"We started out and we could barely get the program going, and now we can hardly raise enough money to keep up with it," said Proctor. "People love it."

Because it's critical for farmers to have some "skin in the game," farmers are required to pay some of the cost of the fencing, added Proctor.

Working with his American counterparts and various conservation groups, Proctor has also helped steer major land acquisition in the U.S. and Canada.

In total, they've acquired some 210 square kilometres of land, largely between Invermere, B.C. and Libby, Mont.

In total, about $58 million worth of land has been acquired, said Proctor. "In Canada, I think we (have) spent around $6 million," said Proctor, adding that much of it is around Creston, an area that can serve as a linkage point for the southern Purcell and southern Selkirk mountain ranges.

Following the presentation, Johnny Mikes—field director for the Coast to Cascades Grizzly Bear Initiative—said Proctor raised some "useful tools" that could be employed in the Sea to Sky region, including the acquisition of private land to facilitate linkage.

"At Coast to Cascades, (it's) not our area of expertise," said Mikes. "We can point an organization in that direction, like the Nature Trust and the Nature Conservancy—groups that are specialists in that ... We're already talking to them about partnering with them in certain areas."

Coast to Cascades, he added, is already busy at work on initiatives aimed at reducing human-grizzly conflict and would look at an electric-fencing initiative with the right support.

"We did some work last summer on bear-hazard assessments in the D'Arcy, Seton, Portage Road areas, and this year we are planning on doing some more in the Pemberton Meadows," said Mikes. "We have Dr. Lana Ciarniello ... she's going to be working with us some more this summer."

But when it comes to working with conservation officers to promote relocation, Mikes said that there is little need for that.

"Our conservation officers are awesome," said Mikes. "They know that these grizzly bears are at risk, and they really go out of their way to go the extra mile to haze bears and make sure they are not having to put a bear down."