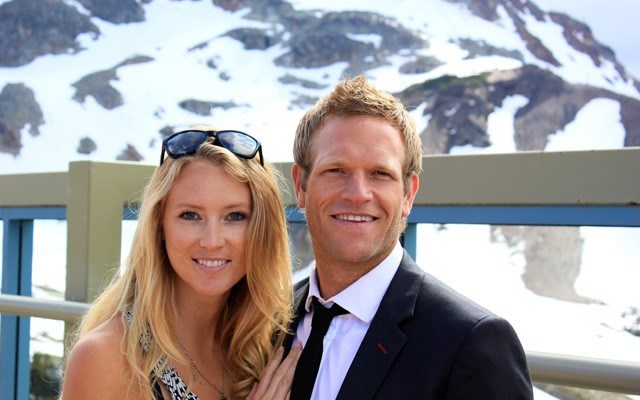 world class Ashleigh McIvor DeMerit and husband Jay DeMerit are hoping to share their experiences with a new generation of athletes. photo submitted

After the support they received through the production and release of Rise & Shine: the Jay DeMerit Story, Whistler Olympic gold-medallist Ashleigh McIvor DeMerit and husband Jay DeMerit felt compelled to keep the momentum going.

"We felt a sense of responsibility to ensure that the messaging behind it travels further," McIvor DeMerit said in an email.

"The number of people who felt very strongly that it was a story that needed to be told really shocked us. They inspired us."

The film documented DeMerit's unlikely career success — which included his captaincy of the Vancouver Whitecaps and an appearance in the 2010 FIFA World Cup.

With the launch of Rise and Shine Retreats in the Pemberton Valley this fall, the couple is hoping the film's message has legs.

"The power behind the story is that the morals go far beyond the world of soccer. It's a story of big dreams, hard work, perseverance, and the value of a positive attitude," McIvor DeMerit said, adding that both she and her husband have found that focusing time and energy outside of their respective sports has benefited their careers.

"We want to develop a curriculum that will allow us and all of our other accomplished friends to instil a deeper understanding of what it takes to be professional at anything — to be a strong leader and a good person first, and a skilled athlete second."

At this point, Rise and Shine Retreats will focus on elite-level soccer camps, but the long-term vision is to make it available for other sports camps, health and wellness retreats and other community gatherings.

"We will have a charitable component which will allow us to provide free camps for local kids a few times a year, opening it up to a broader age group and ensuring that cost is not a barrier for any participation," McIvor DeMerit said.

"The charity will also provide at-risk or underprivileged youth — who may otherwise encounter financial or logistical road blocks — with the opportunity to participate in the elite-level camps by way of selection by our committee."

McIvor DeMerit said the couple has been talking about the idea since they met in 2011.

They plan to host a couple of dry-run camps this fall and have a facility up and running in time for the fall of 2016.

"The intention is to host the participants on our property for four-day, three-night camps, as we want it to be an all-encompassing experience unlike any summer camp or sports camp they've ever been to before," McIvor DeMerit said.

The hope is that attendees to the camp will benefit from the proven leadership qualities of world-class athletes.

"The idea is that our camps will cultivate captains. Be it captains of their respective sports teams, their peer groups or their communities, we want these athletes to leave with the tools they need to be leaders on and off the field," McIvor DeMerit said.

"Parents will be encouraged to bring their kids up to Pemberton themselves, and then stick around for some engaging discussions on what it take to raise a champion, before heading out to enjoy all that the area has to offer from a tourism standpoint."

For more info or to get involved, visit risheandshineretreats.weebly.com or email ashleigh@ashleighmcivor.com.