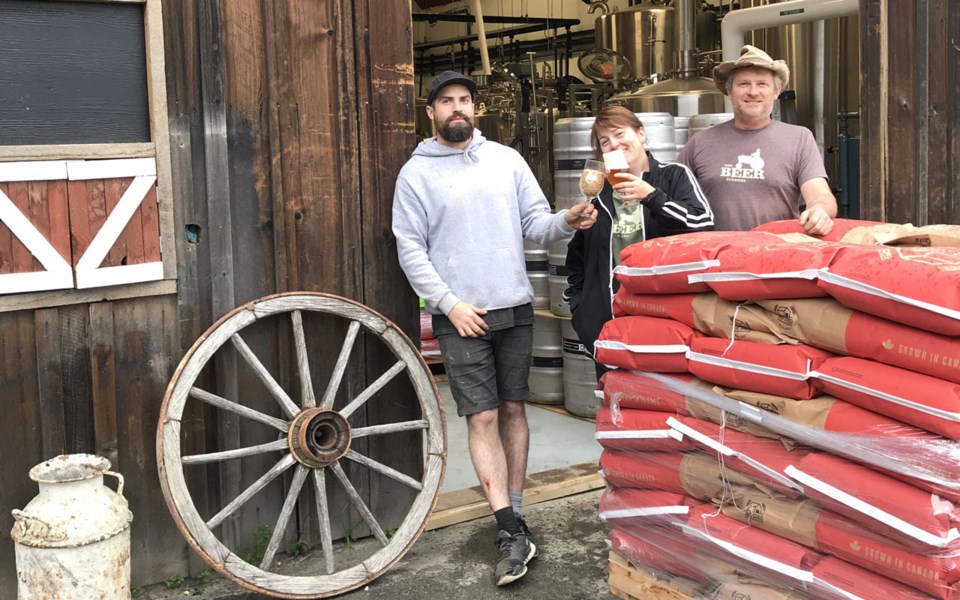 FARM FRESH The Miller family with hundreds of kilograms of barley they grew on their farm property in the Pemberton Meadows. File photo submitted

With the Miller family having purchased its land near Pemberton in 1911, the family has been eligible for the provincial Century Farm Award for nearly a decade, but only received the honour recently.

Head of sales and operations Will Miller explained that the honour wasn’t something the family was aware of until receiving a gentle nudge.

“It’s kind of funny because it’s actually something we never thought about,” he said. “Someone who used to work at the Ministry of Agriculture suggested that we should apply.

“It was kind of a pleasant surprise to be reminded by someone.”

Miller said that the process wasn’t overly cumbersome, especially since the family had its paperwork well in order.

“It was pretty simple. We were lucky because we had all our land ownership documents, the original copies, so it was pretty simple to show the chain of possession,” he said. “You just have to have the family name and the specific lot number that it was.”

In normal times, there would be a ceremony hosted on site, but the Millers still received some physical recognition with a commemorative plaque as well as a statement from Minister of Agriculture Lana Popham.

“I love hearing the stories of British Columbia’s farming pioneers and the Miller family’s story is inspiring,” Popham said in a release. “From potatoes to cattle to beer, they have done it all. Congratulations Miller Farms on your Century Farm Award and cheers to many more.”

In 1911, William Miller and his wife Teresa bought the farm from her brother, John Ronayne, clearing the land to grow vegetables and raise livestock, and even logging and prospecting when possible. Son Donald took over after returning from serving with the Canadian Engineers in the Second World War, focusing on potatoes and cattle, while Bruce Miller took over after Donald passed away in the early 1990s.

“You feel that connection to people you’ve never met.”

Miller’s parents, Brenda and Bruce, made some changes roughly two decades ago by having the farm certified organic, setting the organic trend for the region. More recently, the family made the foray into craft beer by opening The Beer Farmers, with Brenda as head brewer and Bruce as head grower.

“For us, and I think a lot of farmers would say the same thing, it’s always about looking at what your opportunities are and taking risks and being bold in some senses. It’s kind of a risky line of work to be in and if you’re not leading the way, you can be left behind,” he said.

With The Beer Farmers, the brewery was a rarity in that it could grow its own barley onsite. Coming soon, though, is the ability to process it as well through a malting facility on the property.

“We can brew beer that’s never left our farm,” Miller said. “That’s pretty unique. There’s only a handful of breweries like that in North America, so we’re pretty excited to get that going.”

It also comes at a time during the global pandemic when the buying public are more cognizant of how many people and how much distance is involved in bringing a product to market.

“Even for us, it’s a good reminder, even with how much trouble there was with the grocery stores or certain supplies, or things come from China, you realize that although it’s really efficient and we’ve got stuff from all over the world, the global supply chain is very exposed to risk and disruption,” Miller said. “It’s just really reminded us to double down on the local supply and self-reliance.

“In small communities in the farming mindset, not everything has to show up on a truck from the other side of the world.”

All told, with the vast space available on the farm, Miller said operations have continued mostly as normal during COVID-19. The sunflower patch, a popular and Instagrammable attraction last year, will reopen Aug. 12.

The global upheaval also comes at a time when he and his generations are preparing to take the lead of the farm.

“My parents are thinking about unwinding from farming, and I have four brothers, and we’re thinking about how we can participate in farming as well,” he said. “It’s that spirit of reinvention and taking chances.” n