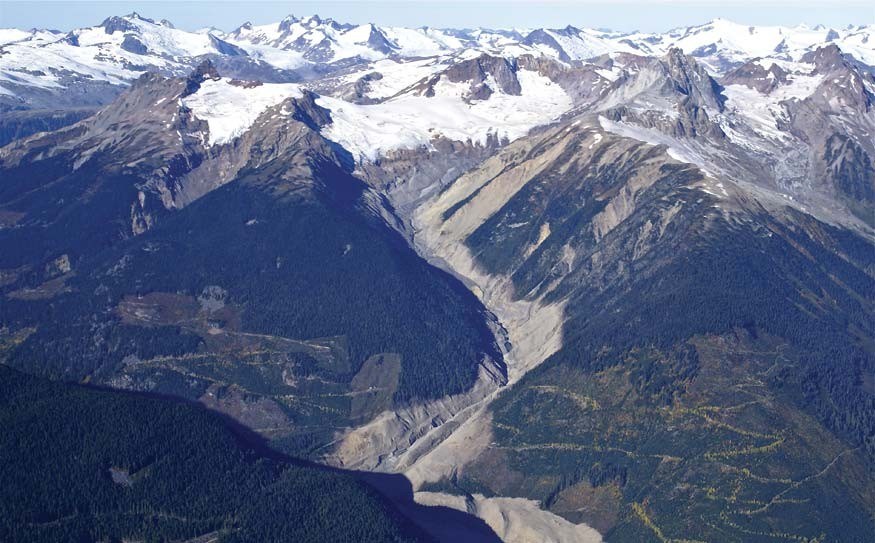 Mt. Meager around the time of the 2010 Capricorn Creek landslide. Photo by Frank Baumann

The Ministry of Forests has confirmed that the “sizeable” July 4 landslide on the southwest corner of Mt. Meager near Pemberton is no threat to the region.

Dave Southam, the ministry’s manager for the Sea to Sky district, told Emergency Management BC that the slide has created no problems and “there is no impediment to water flows in the Meager and Upper Lillooet Rivers.”

The entire drainage of both were checked by geotechnical engineers from BGC Engineering, who flew over the region on Thursday.

Southam noted a small debris flow into the headwaters of Devastation Creek, a tributary to Meager Creek, which created the sedimentation seen in the water.

This information was shared with Village of Pemberton and Squamish-Lillooet Regional District staff.

Ryan Wainwright, the emergency coordinator for the SLRD, said previously: “It’s not abnormal behaviour for that mountain at this time of year… we don’t see any threat to the communities of the Pemberton Valley.”

The Capricorn Creek slide on Mt. Meager in August 2010 was the second largest in B.C.’s history and temporarily blocked the Lillooet River.