Two-lift systems didn't work out, one dismantled, the other sits abandoned
Aug 8, 2012 9:00 PM By: John French 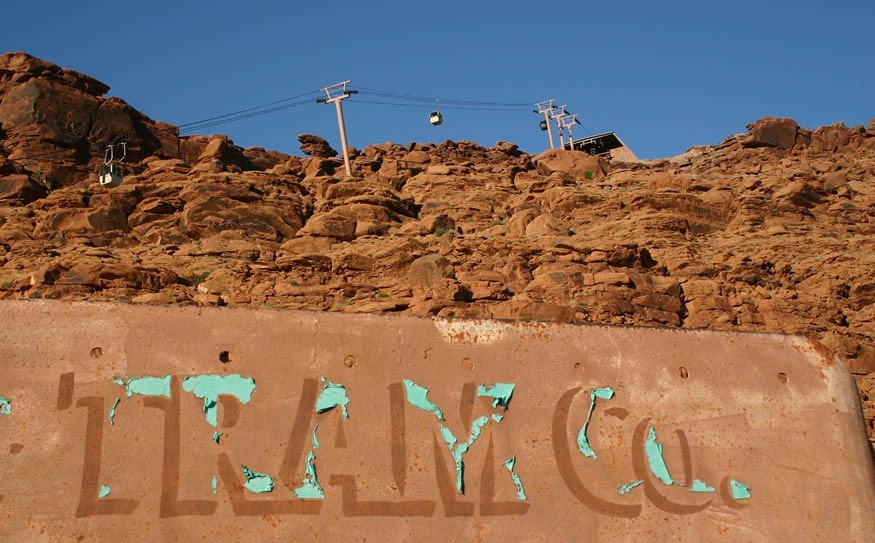 Moab, UT is a community that has had its fair share of experience with lift systems. At the north end of the recreation Mecca in Utah sits an abandoned project just south of Arches National Park beside Highway 191, the main north-south route through town.

Sightseeing lifts are successfully operating around the world in places like Sulfur Mountain at Banff, Queensland in New Zealand, throughout the Alps in Europe, at the North Shore's Grouse Mountain and right here over Fitzsimmons Creek with the Peak to Peak Gondola, lessons can be learned here from Moab.

The original proponent of the failed Moab project, William "Rick" Jewett, installed the sightseeing lift in 2001 but it never moved any paying customers. The project proponents and county officials became embroiled in legal disputes that led to the demise of the project.

To this day the lift infrastructure sits at the north end of Moab as a blunt reminder of the failed venture from more than a decade ago.

Journalist Lisa J. Church has followed the history of the failed business from before the beginning of the gondola story. The earth-toned lift at the north end of Moab isn't the only tramway in Moab's history. The community's first lift system for tourists, hikers and bikers started operating in early 1999 on the west side of Moab but was eventually removed in 2005 after the land under the quad chair was purchased by the Nature Conservancy of Utah.

According to Church, the chairlift built by Emmett Mays was the fulfillment of a lifelong dream held by the long-time manager of the city's phone company.

"They weren't generating the kind of revenue they needed," says Church, the editor of the local newspaper in Moab.

The chairlift, known as Moab's Skyway, took mountain bikers and hikers to the top of hiking and riding trails. The upper station included a small vending machine area and an observation deck. Church has reported the land is home to several rare plant species and pictographs.

Moab mayor David Sakrison is happy the chairlift was dismantled and the land restored to a natural state. He says some trails and roads in the area are still being used but mountain bike jumps and stunts were removed along with the lift towers.

"There just wasn't the demand to make it viable," says Sakrison from his office in Moab on one of his community's hottest days of the summer. "He got into financial straits, there was an illness in his family and one thing led to another and they just got in over their heads and had to shut it down."

Moab was the only permitting agency involved with that chairlift and Sakrison says the city collected a bond from the developers just in case the venture didn't work out.

"We had the foresight, before they built it, to address that contingency if they ran into problems then they would have a certain amount of time to take it back down and reclaim the land that it was on," Sakrison says. "That was one of our better moves, to be quite honest with you."

Speaking from the Moab experience, Sakrison says it just makes sense to demand a removal bond of some kind in case the project isn't viable.

"To me that only makes sense," says the mayor of Moab.

The Moab Scenic Tramway was, during the approval stages of the project, on land controlled by Grand County so Sakrison says the city of Moab had nothing to do with that failed business venture at the north end of his city. He added that Moab has since annexed the property and a new owner recently took control of the land.

"I really don't know what the new owner's intentions are with that," says Sakrison. "He hasn't come to the planning commission so I don't know if he's going to authorize its opening or just take it down."

According to Sakrison, the original owner of the project wanted to operate a high-end restaurant at the upper lift station, which is only about 230 metres from the base station, and a mining museum but they didn't have the proper zoning in place.

"The county would never allow the restaurant to open up there," Sakrison says, recalling the dispute between the proponent and the regional government.

Church adds that the museum was to be built into the rocks and feature displays of old mining equipment.

Sakrison says once the new owner of the property comes forward with a proposal, it will be reviewed by local leaders then presented to the community for feedback before any new development plans are approved.

While the new owner works on his plan for the property the once-modern gondola sits silent and motionless, leaving Moab residents wondering if it will ever take visitors to the top station to get above it all and enjoy the view.