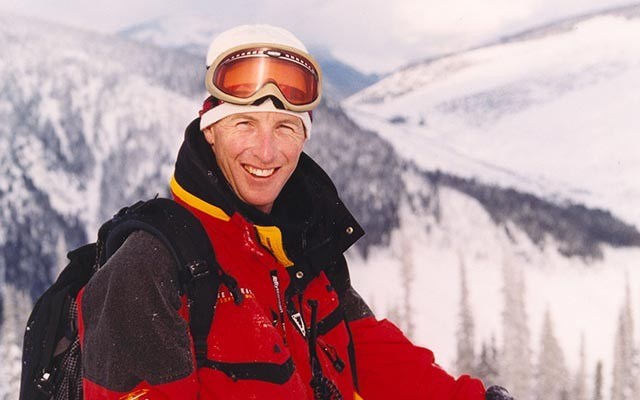 A year before he died in a highway accident in 2002, heli-ski guide Brent Mathieson became the first person to ski the 2,000-metre run from the top of a then-unnamed mountain to the creek below — a path that became known as "Brent's Run."

Fourteen years later and Mathieson has more than just a ski run named after him.

On April 24, the provincial Ministry of Forests, Lands and Natural Resources announced the mountain would now officially be known as Mount Mathieson.

"It really feels like Brent is still with us, in some ways," said Karen Richardson, Mathieson's girlfriend of six years, of the announcement.

Mount Mathieson — located about 90 kilometres northwest of Whistler and reaching a height of 2,323 metres — is a fitting tribute for a man who dedicated his life to mountain safety, Richardson said.

"He was pretty active in the mountain community," she said.

Mathieson was born and raised in Burnaby.

According to a Ministry of Forests press release, Mathieson spearheaded the creation of the North Shore Avalanche Advisory — a safety bulletin that summarized winter mountain conditions. The publication would later be incorporated into Avalanche Canada's public bulletin on avalanche safety.

"He was truly dedicated to public avalanche safety and his work has left a lasting legacy."

Minister of forests Steve Thomson said naming the mountain after Mathieson was a testament to his many contributions to backcountry avalanche education.

"It is a fitting tribute to someone who was an accomplished outdoorsman, expert guide and respected community leader," Thomson said in the release.

According to Sharon Dean, manager of communications for the Ministry of Forests, the B.C. Geographical Naming Policy governs how geographical features are named in the province.

Personal names are only given to geographical features posthumously a minimum of two years after the person's death, Dean said in an email.

"The ministry (also) consults with the community, public and First Nations on commemorative naming proposals," she said.

"There's been lots of talk about what to do as a legacy for Brent," she said, adding that some of the suggestions included a scholarship fund at a school he worked at in Vancouver, or a mountain hut somewhere in the backcountry.

"But I think the naming of the mountain, it was just perfect, because it's just such a solid piece of land... I think it just has so many good aspects about it," Richardson said.

"It feels like it's a real grounding piece, and it's in the area where he lived and worked so I just think it represents lots about him."