New cable for Sea to Sky Gondola arrives in Squamish 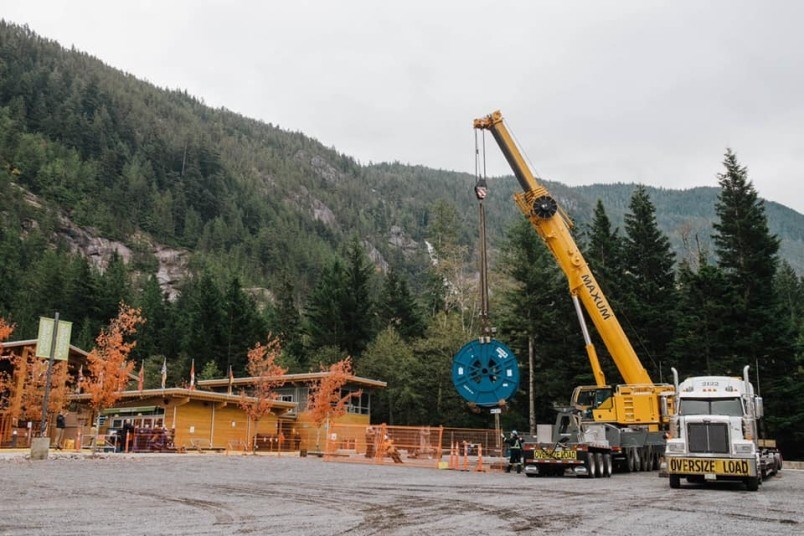 Photo by Haley Hardy / Courtesy of the Sea to Sky Gondola

The new cable for the Sea to Sky Gondola has arrived, a significant step forward toward the tourist attraction’s re-opening after its previous haul rope was cut by a saboteur.

On Oct. 24, the brand new cable completed its 8,275-kilometre journey from Switzerland to Squamish. It showed up earlier than expected.

“The delivery of the cable is a major milestone in the rebuild process and keeps us on track for an early spring 2020 opening,” reads a post from the Gondola’s website.

“Over the next week, we will be working hard to install the rope. Experts are coming in from around the world to assist with the install. Prior to the cable arriving and as part of the rebuild, we have added new security measures to the operation.”

The 120-tonne rope was made by Fatzer AG Wire Ropes. The company’s cables are used in ski centres, hiking regions and mining areas, among other places.

No firm dates have been announced, but Gondola representatives have said they are hoping to re-open the facility by spring next year.

On Aug. 10, the gondola cable and cabins were discovered on the forest floor, with many of the cabins damaged beyond repair.

On Aug. 23 Squamish RCMP confirmed the cable had been deliberately cut.

RCMP hasn’t released any other details in the ongoing criminal investigation.

This story originally appeared in The Squamish Chief on Oct. 25.