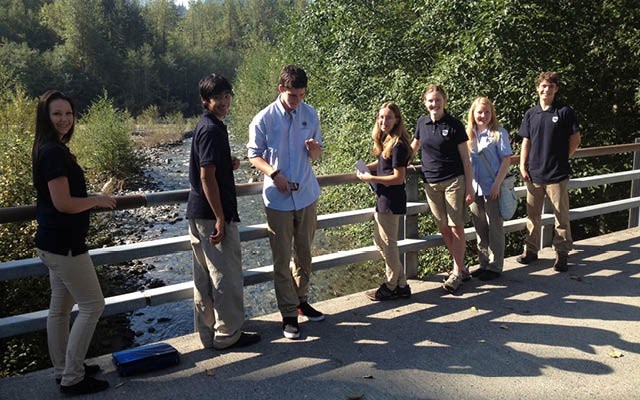 The TEDActive conference wrapped up in Whistler last week, bringing together some of the leading minds in their fields under one roof for a round of inspirational talks.

Now a group of Coast Mountain Academy (CMA) students is doing some inspiring of its own with the first ever FEATKids speaker series, to be held Friday, April 4 at Quest University in Squamish.

The FEAT (Fascinating Expedition Adventure Talks) event was organized by the Grade 9/10 planning class at CMA and focuses on staging engaging adventure talks for youth, by youth. The event was modelled after the FEATCanada show run in Vancouver each year that brings together noted athletes, explorers and adventure seekers to deliver seven-minute talks. Among the list of eight youth and adult speakers planned for the event is CMA student Kate Rowan, who explored refugee camps in Rwanda; Oliver Bibby, who holds the record for most ascents of Grouse Mountain in a day; luger and CMA student Nicky Klimchuk-Brown; and Jeremy Bally, who biked across seven countries to raise of awareness of human rights issues.

The seven students involved had total control over every aspect of the project, from reaching out to speakers, to securing a venue, to promoting the event, and it's the kind of engagement CMA teacher Brad Gooderham said is par for the course at the school.

"We like to focus on communication, collaboration, critical thinking and creativity — four of the major pillars of 21st century education. Bringing that all together in an event that is student run, is a student initiative that they've really taken the reins on and run with, gives them a sense of ownership over their education," he said.

It's a prime example of the Coast Mountain students engaging more deeply with their learning, something student Nicolas Beaulieu said he did in spades while serving as FEATKids' communications manager.

Yellowknife resident Jill Gilday, who will be sharing her experience of leading a group of youth across the Sahara Desert to educate them on worldwide water issues, said she was moved to take part in FEATKids because it aligns with the mandate of a non-profit she runs in the Northwest Territories, called the Northern Youth Leadership Society.

Inspiring youth to do great things, she said, is all about engaging them in ways that go beyond the typical classroom.

"It's about engaging the youth in different ways so that you get past the apathy that comes from traditional learning or boredom," she said.

"I think sharing messages with young people about going after things, and trying really hard and never selling yourself short is just so important. It's always been important and it always will be important to inspire young people to do crazy things and give anything a go."

The FEATKids@CMA event runs from 10:30 a.m. to 2:30 p.m., and is free to attend. The presentations are geared towards middle and secondary school students, but all are welcome. Seating is limited so reserve your space now by emailing nicolas.beaulieu@coastmountainacademy.ca.