Pedestrian overpass-bridge being installed south of Squamish
Jul 17, 2012 4:00 AM By: Cathryn Atkinson 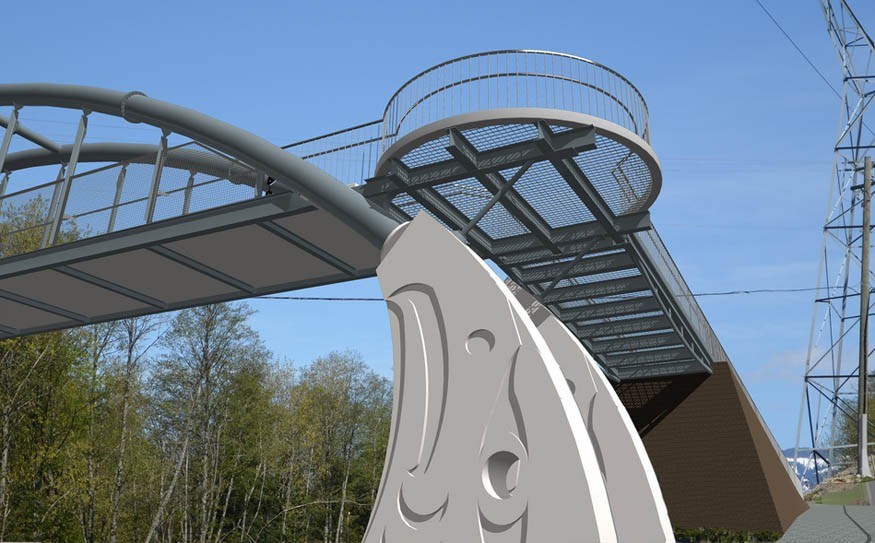 BRIDGING THE GAP: The province partnered with the Squamish Lil'wat Cultural Centre and the Squamish Nation to employ a First Nation artist who collaborated with the overpass designers for a new pedestrian bridge set to be put in place July 17 and 18. Several First Nation cultural elements are incorporated into the design and will result in a unique, aesthetic and culturally significant overpass, as can be seen in this artist rendering from the BC Ministry of Transportation.

The Sea to Sky Highway south of Squamish will be closed over two nights for the installation of a pedestrian overpass bridge.

There will be a detour on municipal roads for light vehicles and buses, but fuel trucks and four-axle trucks will be stopped on July 17 and 18 from 10 p.m. to 5 a.m., said Erin Moxon of the B.C. government's project management services.

The pedestrian bridge will connect two parts of the Squamish Nation's Stawamus Reserve which lie on either side of the highway. The bridge supports were distinctively designed to look like a Coast Salish two-headed serpent and a thunderbird by Squamish Nation artist Xwa-lack-tun or Rick Harry, who was awarded the Order of British Columbia earlier this year. Both mythological creatures come from local legends.

"The contractor has to shut down the highway to move all their cranes in to be able to lift the steel arch in place," Moxon said. "On the first night they will be putting up the steel arches and on the second night they are going to come back in to put the deck panels on."

Vehicles with more than three axles will not be allowed on the detour, which runs along District of Squamish municipal roads in Valleycliffe, going north from Valley Drive to Guildford Drive to Clarke Drive.

"We're going door to door to all the residents so they're aware and we're blitzing the radio," Moxon said.

"It will mostly affect the commercial vehicles. Those that can make it through are all buses, and passenger vehicles, including pickup trucks. Those ones that won't make it through are the logging trucks, all the articulated ones, and fuel trucks because the detour is on a residential road and they don't want hazardous materials going through these areas."