Pemberton Facility one of 12 recognized with Governor General's Medal in Architecture
May 25, 2016 6:00 PM By: Brandon Barrett 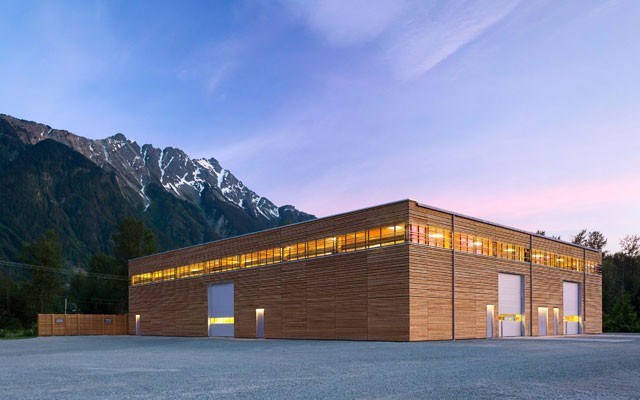 Passive aggressive The design for the BC Passive House Factory in Pemberton, which was recognized with a Governor General's Medal In Architecture last week, was inspired from the belief that industrial, everyday buildings can be "just as important, and well considered" as public facilities. Photo submitteD

A modest, small-scale industrial facility in Pemberton is garnering national attention this week after it was awarded a prestigious architectural honour. The BC Passive House Factory on Artisan Road is one of 12 recipients of a 2016 Governor General's Medal in Architecture, which recognizes outstanding achievements in recently built projects by Canadian architects. Designed by Vancouver firm Hemsworth Architecture, the all-wood facility was built to the rigorous Passive House standards of sustainability and energy efficiency.

"I was a little shocked, to be honest," said the firm's principal, John Hemsworth. "If you look at the history of the award, the projects that usually win it are not small industrial projects in places like Pemberton. We weren't expecting it, put it that way."

The first facility of its kind in Canada, the 1,500-square-metre building is used for the manufacturing of prefabricated Passive House panels and was conceived "as a simple, light-filled, wooden box." The main structure of the building is made from Douglas fir glulam post and beam, with solid wood, cross-laminated timber-panel walls, all made in B.C. Because so many of its components were pre-fabricated, the building's superstructure was erected in a mere eight days.

Passive-House design principles are meant to significantly reduce the energy required for heating and cooling by utilizing an airtight, double-walled system and high-performance wood windows, as well as an efficient heat-recovery ventilation unit that pumps in a constant flow of fresh filtered air.

But Hemsworth said it was important that the factory was not only sustainably built, but had "a sense of place" that the average industrial site lacks.

"We don't look at any of this as just construction. The idea that if a building can connect with somebody, and that usually happens with the use of the site and the use of materials, then the building will elevate itself," he said. "We were lucky to have a very interested client, BC Passive House, to be able to explore some of these ideas, still within a strict budget, but in my opinion this should be happening everywhere: In your municipal halls, in elementary schools and other everyday buildings we spend our days inhabiting."

The Sea to Sky in many ways serves as the centre of the Passive-House movement in Canada. Whistler became home to North America's first Passive-certified building when the Austria House was shipped in from Europe and re-assembled ahead of the 2010 Olympics. (It's now known as the Lost Lake PassivHaus, and serves as the home of CrossCountry Connection.) The company responsible for erecting that facility, Whistler-based Durfeld Constructors, also built the Pemberton factory to house its Passive-House construction work and constructed Canada's first Passive-certified residential home in Rainbow.

"There's no question that (Passive design principles) are on the uptake," said builder Matheo Durfeld, who also serves as CEO of BC Passive House. "We're seeing architects and developers coming to us specifically asking how they can implement these principles into their design." For the full list of Governor General Medal winners, visit www.raic.org.