Pemberton man on the road to recovery 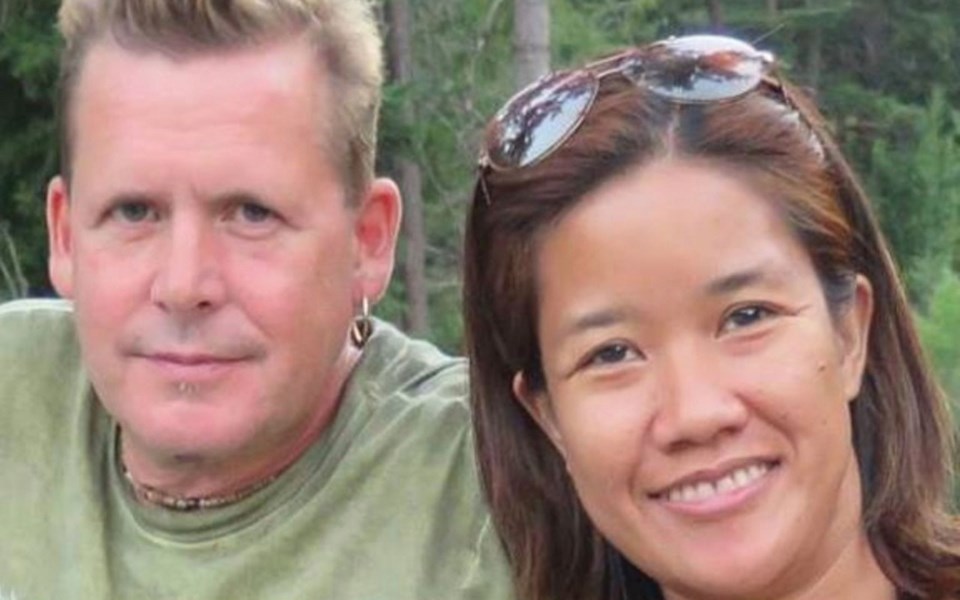 David Sneddon, shown here with partner Ann Chua, is recovering after suffering burns to 29 per cent of his body in a March house fire. Photo courtesy of Christy Sneddon

For the first several days of consciousness after suffering burns to 29 per cent of his body, David Sneddon had some difficulty differentiating his nightmares from reality.

But once he fully returned, he talked to his long-term partner, Ann Chua, and his sister, Christy, over the phone.

“One day, I just came out of it,” the Pemberton resident said on June 13 from Vancouver’s GF Strong rehabilitation centre. “I talked to both of them on the phone and I bawled my eyes out. I felt faith and cheer for the first time in what felt like forever.”

One of the first pieces of good news he learned was that Christy had organized a GoFundMe, now sitting at just over its goal of $20,000. The fundraiser, online at gofundme.com/f/help-david-and-ann-rebuild-after-the-fire, is still active, and Sneddon said every penny helps, as the couple did not have tenant insurance to cover anything lost in the March 29 Larch Street blaze.

“We lost everything. We don’t even have a spoon,” he said. “My girlfriend just bought a new bed that we have to buy sheets for. She has to buy towels for the bathroom, cooking utensils, the list goes on and on and on. We have nothing, so $20,000 sounds like a lot of money, but it goes pretty fast when you have to replace everything.”

In addition to the couple’s needs that burned up, there were some personal items lost as well. Sneddon, an avid skier, just bought a new pair of Mindbender skis.

“They were still in the plastic,” Sneddon said. “I had a very large graphic novel collection and quite a few collectables that were worth some money and poof.”

Pemberton Fire Rescue Chief Robert Grossman said on June 17 that the cause of the fire was still under investigation.

Material possessions aside, Sneddon is grateful to be alive after Chua pulled him out of the house. He underwent a series of skin grafts, and recently had pins in his fingers, spanning from his knuckles to his fingertips, removed.

“It’s a real long, slow process,” he said. “I have to stretch. I have to make sure I work all the different sites where they can have scar tissue built up.”

Shortly before talking with Pique, Sneddon had regained some independence via a walker, giving him the ability to walk outside around the parking lot and to a nearby park. He had to pass a 56-point test with a score of at least 35, and he overshot the minimum with a 44.

“It was life-changing,” he said. “I was in a wheelchair, but I don’t have [full use of my] hands, so the only way I was able to use the wheelchair was with my feet, so I was speeding around the whole hospital backwards and making everybody laugh.”

Learning to use his hands again has been a lengthy process for Sneddon, an executive chef.

“It takes a really long time because the skin grafts pull,” he said. “Two of them on my left hand are just strange. They’re not fingers yet. Basically, I have two fingers on each hand, and now that they took the pins out, I’m starting to use the right hand a lot for pinching things like a fork or picking something up.

“One of the things they say to you is, ‘Do your exercises and your finger bends,’ and all that, but one of the best things you can do is use it.”

With grafts on his face, Sneddon’s diet has been restricted, with the hospital often serving him a side of gravy regardless of the entrée to make it more feasible to eat, if not necessarily appealing. Since moving to GF Strong, though, nurses have been happy to heat up cans of food sent to him by Christy if he requested.

“For breakfast, I had a can of Chef Boyardee. It’s what I wanted. I woke up and I was hungry. I didn’t want an egg and a muffin,” he said. “I have enough food in here to start a grocery store.”

Since expanding his world with his walker, Sneddon has kept his spirits up by visiting with other patients, including a woman who lost both legs and an arm, but is “happy all the time.”

Socializing again has been welcome, as it’s been difficult for Chua to come visit as, on top of pandemic precautions, she does not drive and has returned to work, while his sister could not travel from Toronto because of flight restrictions.

Sneddon, noting that his recovery would continue after his release, hoped he would be back in Pemberton by early July.

“I’m really close to walking, and once I’m walking, they don’t have a lot of reasons to keep me,” he said