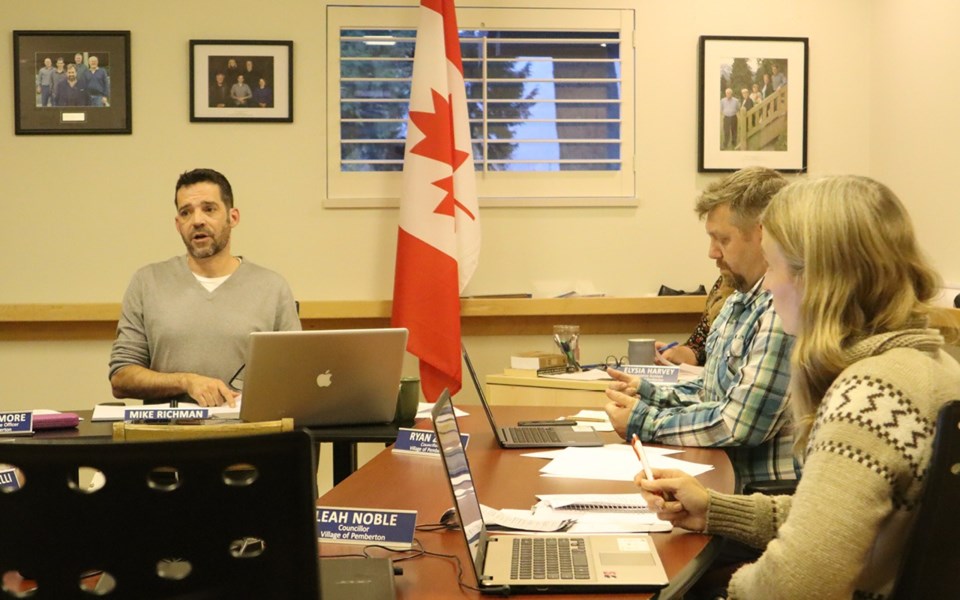 Village of Pemberton (VOP) council passed a resolution to add an amendment to its bylaw enforcement policy at this week's Oct. 8 regular council meeting.

The change was made to clarify the role of bylaw on strata properties when it comes to animal control, explained VOP Mayor Mike Richman, following the meeting.

"Strata lands are essentially private lands" that are governed by "strata corporations" that make their own regulations when it comes to animal control, he said. "The amendment was about making it clear what the Village's role is when something happens on private property and what's not."

In its report to council, VOP staff said that some residents are using the VOP's bylaw enforcement policy to target people they don't like.

"Unfortunately, it is not uncommon for residents who do not get along with their neighbour to submit complaints to the Village, utilizing Village bylaws, including the Animal Control Bylaw and requesting that an aggressive dog designation be established on another dog," stated the staff report.

"In some instances, after committing resources and investigating the circumstances, staff have determined that it is simply a matter of two dogs that do not get along with each other for varied reasons."

"With respect to animal control matters not involving harm or a minor injury to a person that take place within a strata development or on strata lands, the Village will refer these matters to the Strata Council to address and resolve."

Council also supported two resolutions that move along a School District 48 (SD48) plan that would see high school students build a residential home on the corner of Poplar Street and Aspen Boulevard.

SD48 hopes to have students (who will be supervised and taught by industry professionals) start building in the spring.

In order to move forward with the project, the school district is asking for a 1,001-square-metre portion of its property at 1400 Oak St. (Pemberton Secondary School) to be rezoned from "civic and institutional" to "residential."

The re-designation would require an amendment to the VOP's Official Community Plan.

Council therefore passed a resolution to require SD48 to organize and host at least one public information meeting before considering first and second readings of the change.

It also passed a resolution to have staff consult with relevant stakeholders—including the Lil'wat Nation, the Squamish-Lillooet Regional District, and the Pemberton Valley Dyking District—before moving to first and second readings of the change.

Richman said that a spring timeline would likely be feasible if the school district moves quickly with the public consultation process, though he did note that he had heard some negative feedback about the rezoning.

"There are concerns and questions from neighbours there," said Richman. "That's why I'm anxious to see the public information meeting and see what people's comments are."

VOP council also approved staff's request to apply for $150,000 in provincial funding to pay for a fuel-reduction treatment of an area that has been identified in the VOP's Community Wildfire Protection Plan.

The area is located south of the VOP's downtown core.

"The primary objective of this fuel-management prescription is to improve public safety and to provide anchored, low fuel, defensible space 300 [metres] wide in a strategic location south of the Village core," reads the agenda package.

If successful, the $150,000 is would pay for the treatment of approximately half of the identified area and is the maximum the VOP can apply for from the specific fund.

Richman said he is hopeful the VOP will be successful with its application.

"The province recognizes that this is a means to hopefully cut down on our wildfire risk as well as cost," he said. "They are putting more money into mitigation, in the hopes that they can put less into response."