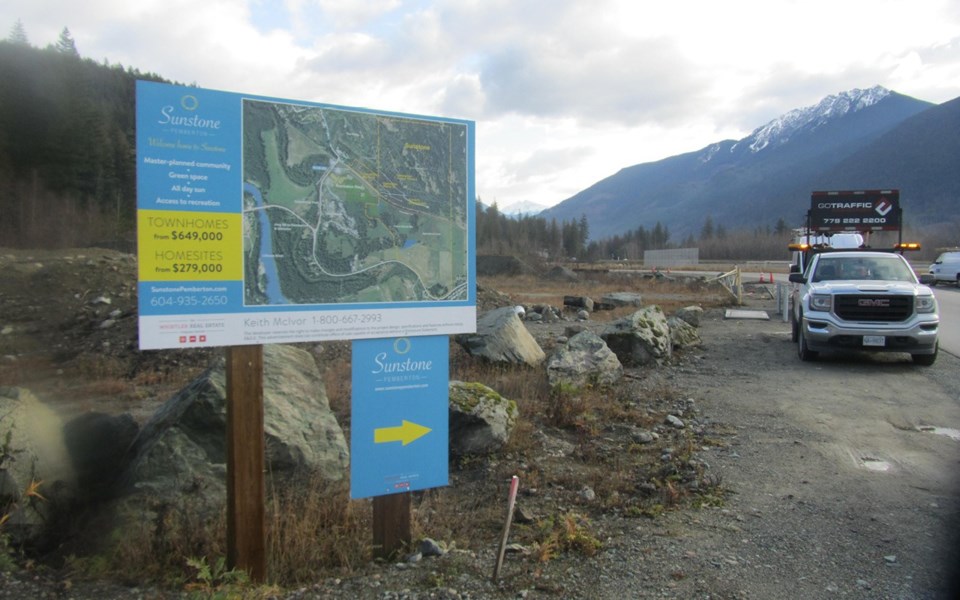 Earlier this month, on Nov. 5, a public hearing was held on the changes to the VOPs Official Community Plan (OCP) and a bylaw change that the Sunstone proposals triggered.

At that meeting, Pemberton resident Jagoda Kozikowski raised concerns about the expansion, saying that it will increase traffic into the area, and endanger a threatened sharp-tail snake population.

Kozikowski is not alone in her concerns. Councillor Amica Antonelli, a working land-use planner, spoke out against the amendments at the Nov. 19 regular council meeting.

She recommended rescinding the first two votes in favour of the re-designation of the land and called for a comprehensive land-use analysis and planning process that addresses public concerns and incorporates the VOP's forthcoming hillside development guidelines.

"So overall, I kind of feel like there's been no strong rationale provided for circumventing this special study area, other than it's convenient to do so," Antonelli said. "The special study area calls for a comprehensive land-use analysis and planning process."

Sunstone is seeking to gain the "maximizing lot yield" rather than providing community amenities, she added, saying that tree retention is essentially left up to private landowners under the current arrangement.

"Another way of land subdivision would be to retain some lands and treed buffer areas to protect your viewscape and give people the privacy that they're looking for," she said.

Antonelli also raised concerns about the public information session organized by Sunstone, saying that it was "very unusual" that it wasn't advertised in the newspaper.

She also said that this VOP council has not reviewed the studies regarding potential impacts to species at risk. "So if make we this decision now, it would be without any information on species at risk," she said.

Coun. Ted Craddock responded that the previous VOP councils engaged with such studies in a meaningful way and were satisfied with mitigation efforts that were taken.

"I believe the community is onboard with what has happened up to this point in time," said Craddock.

Both Craddock and Coun. Leah Noble supported the resolutions (Coun. Ryan Zant was absent from the meeting.)

In his comments to council, Richman said that there would be a more fulsome public consultation process when Sunstone comes forward with a planned, later phase of its project, which would involve a much more significant land area. He added that at that point the VOP's forthcoming hillside development guidelines would be able to be incorporated into the planning process.

Moving forward, Sunstone will still need to submit a subdivision application, which will ultimitely be approved by the VOP's approving officer, not Council.

Following that, the applicants will then be required to go through a development permit process for environmental protection and land constraints before the land can be altered to create the lots, roads, tand trails.

Lots can then be built upon once purchasers receive a building permit.

VOP council gave first and second readings to two amendments that would enable the Sea to Sky School District 48 (SD 48) to take another step towards its plan to build a new single-family residential home on land it owns on the corner of Poplar and Aspen streets.

The district is hoping to operate a new program out of the Pemberton Secondary School (PSS) that would give students the opportunity to gain hands-on learning experience in multiple trades such as design, construction and landscaping, prior to being involved in the sale, marketing and staging of the new home.

The school district has proposed that the new home will either be sold on the private market or serve as staff housing for teachers.

The school district held a public information meeting at PSS on Monday, Nov. 18.

Planner Joanna Rees said a dozen people attended the meeting, with most people in support, a few undecided, and one opposed. She added that plans for the project show a three bedroom with a one-bedroom suite.

Staff is supportive of the re-designation and third parties consulted, which include the Lil'wat Nation, did not raise objections to the change when consulted on it. .

"There was no objection from any external agencies either," said Rees.

The lands are currently in the process of being transferred from the province to the Lil'wat Business Group.

Dr. Nick Fisher said that while he is not opposed to the development, he is concerned about the amount of traffic it would bring to the area and wondered if "a new traffic summary may be required."

In an interview with Pique following the decision, Richman said that the land transfer is "outside of our jurisdiction" and that there will be a robust planning process when the project proponent brings the project forward.

"I want people to know that we are not just allowing development to happen ad hoc up there," he said. "We recognize that this is a whole new area to our town, and we want to make sure we get it right."

The public, he said, will have an opportunity to be heard and give input through the rezoning process and official community plan amendments that will be needed to move forward with the project.

"There will absolutely be public information sessions, opportunities here at open meetings and public hearings, to make sure that the public is heard on all this, but I'm happy that people are getting involved early," said Richman.