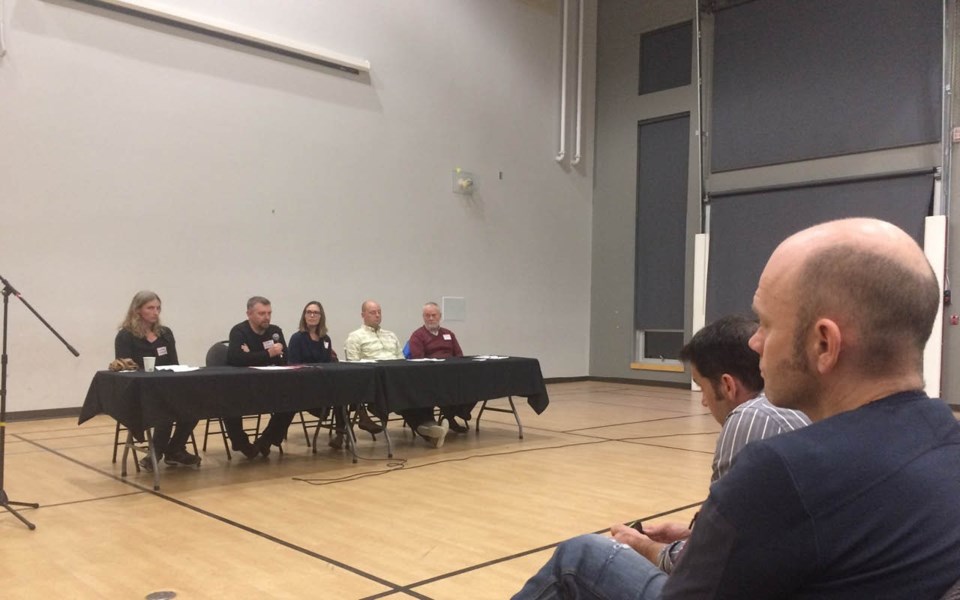 Pemberton council hopefuls discussed growth and overtourism during a lively all-candidates meeting in the lead up to the Oct. 20 municipal election.

As he had a conflicting engagement, MacKenzie did not attend the meeting and was represented by Adam Adams, who outlined a platform and fielded some questions.

In her opening remarks, Noble said that she feels that Pemberton is experiencing some "growing pains" and said that she would like to focus her efforts on improving transportation and affordable housing.

Zant said that he generally likes the direction VOP's current council has taken the Village and said that he would support the building of amenities tailored to the needs of families.

A land-use planner for the Resort Municipality of Whistler, she highlighted sustainability as a top issues.

VOP Councillor Craddock said that while serving as a councillor is a difficult job, he finds tremendous joy in it.

He said that he would like to further ongoing projects, such as regional transit, the downtown enhancement project, and getting a community forest, in coordination with Lil'Wat Nation, off the ground.

The dominant theme of the evening was growth, with many of the questions focused on concerns about overtourism and the degradation of backcountry gems.

Noble said that while she didn't know what the power of the municipality would be to prevent overtourism, it is an issue of "huge" concern to her.

"I've watched the rise and fall of Joffre, like many of us have, and I'm scared for Tenquille as well-that it will be next," she said.

Zant suggested that Tourism Pemberton could shuttle people between Pemberton and Joffre. He also said there is a need for more park rangers at places like Mosquito and Ivy Lakes.

"I think we need more oversight from park rangers, to say 'Hey, pick up your garbage. This isn't where you can throw your stuff."

Antonelli said that with Pemberton on the map as a backcountry destination, the crowds are going to come and that the Village should support strategies that produce sustainable tourism.

"(Parks Canada's) strategy is to guide the bulk of the tourists to a single or several high-impact areas, and provide them with the amenities they're looking for and the signage that could educate them," she said, suggesting the strategy as an option to look at.

Craddock said that the overtourism issue is already treated seriously by council.

He noted that the current council brought a resolution to the recent Union of British Columbia Municipalities Convention that called for day reservations of high-use parks.

"It was one item that did not have to be debated," said Craddock. "It was passed unanimously."

A representative from the PVTA asked a trails-related question about ways council could mitigate trail loss on private land.

Noble suggested that the Village could insist that new developments provide right of ways.

"I know a lot of subdivisions have put forth small amenities to the communities-tennis courts, for example-so maybe that's something that we could really promote," she said.

Craddock said that it's important to be aware that sometimes trails are built on private properties.

He added, though, that he supports trails, and that the new community forest may translate into some new trails behind Signal Hill Elementary.

"I also would like to see more trails on the valley for geared more towards seniors and young families," he said.

Speaking on behalf of MacKenzie, Adams said that trails are an important economic driver for the town.

"They are an important economic as well as a recreational driver of the community," he said. "So keeping those trails and building new ones is quite important."

Antonelli added that she sees a "little bit of a gap" in Pemberton's trail network.

"We don't have immediate access from the Village to the backcountry, and I think that's a major opportunity for the residents as well as for our economy," she said.

The candidates were asked about what they would do to support childcare in the community.

Antonelli said that she would like to see the Village work with the Union of British Columbia Municipalities to "advocate for the provincial government to step in and subsidize daycare."

Craddock noted that with an average age of 37 years old, Pemberton has a major need for childcare.

He said that the Village should look to partner with organizations to offer more after-school care options. "I'm willing to work with any group or organization that has some really good ideas to bring it forward," he said.

Noble said that as a single mom, she recognizes full-well that daycare is a "huge issue in this community."

"I think we definitely need to explore any avenues for subsidies, grants-whatever it takes to expand the daycare options in the community," she said.

Asked what he thought of the event at the end, resident Adrian Bolden said he was impressed with the turnout and discourse.

"I thought there was a lot of good questions brought up by the community," he said. "It was a good turnout, and the format was very well run by Graham (Turner)."

Bolden also picked up on one of the last questions of the evening on what council could do to encourage more civic participation.

"It's a very good question right now, and key to moving forward in politics," said Bolden.