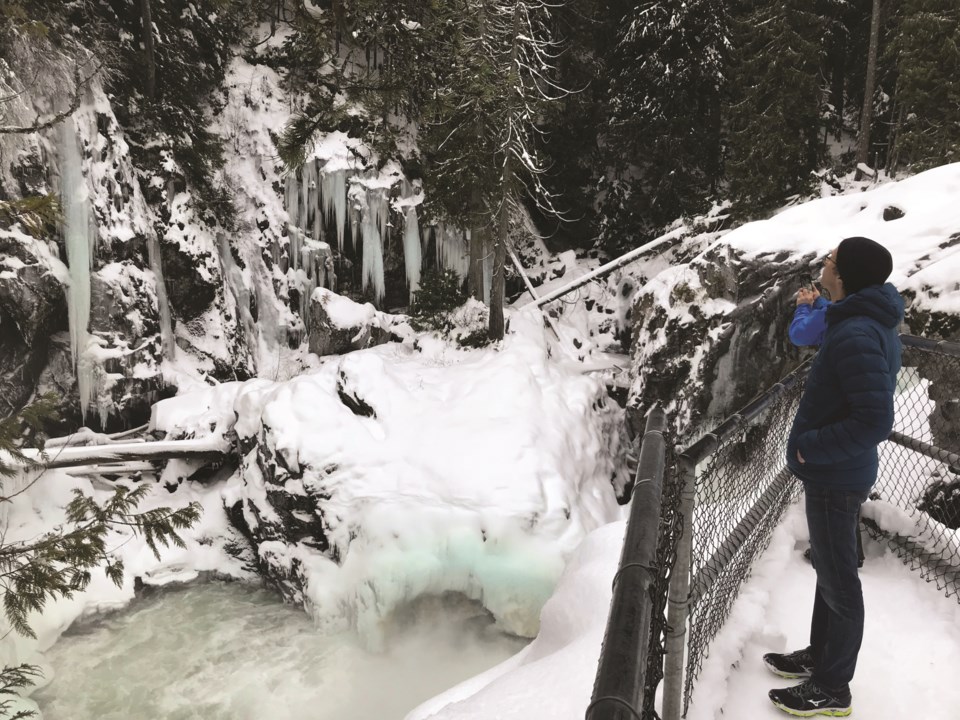 The parking lot at Nairn Falls Provincial Park could be cleared of snow and open this winter if funding is approved. PHOTO BY ALYSSA NOEL

Pemberton could soon see the gates to Nairn Falls open for the winter.

During a Committee of the Whole meeting on Tuesday, Dec. 8, council discussed the funding requests put forward by various community groups for the Pemberton and District Initiative Fund (PDIF)—which could include $5,500 for snow removal at Nairn Falls Provincial Park.

“We have some buy in from BC Parks on this,” Mayor Mike Richman said during the Zoom meeting. “We got a response—Mr. [Mark] Mendonca [president of Tourism Pemberton] sent it my way from BC Parks saying they would be willing to work with our community to find a way to keep [them] open. They don’t have a budget to do any of the work, so the funds to … clear it and keep it safe would have to come from somewhere else.”

While the committee debated Tourism Pemberton’s request for a 525 per cent increase in funding compared to last year without plans for direct spending (they received $8,000 this year and requested $50,000 for next year), ultimately they decided to recommend that $5,500 be allocated for the snow-clearing project separate from other Tourism Pemberton funding, with the caveat that any remaining money be returned at the end of the season.

Pemberton, the Squamish-Lillooet Regional District and Area C are all part of the decision-making process when it comes to what projects or organizations get money from the PDIF. While council discussed which groups they would recommend for the funding, the decision will be made by the Pemberton Valley Utilities & Services (PVUS) Committee board in January.

In total, there are two funds within PDIF, including $75,000 for arts, culture and recreation and $50,000 for economic development.

The owners of 1368 Fernwood Drive who applied for a development variance permit as part of the process to subdivide their 0.47 hectare property into four lots (including the existing property) will have to reapply after council voted against the application.

Council referred the item back to staff at its May 26 meeting because of questions around snow clearing, drainage, a setback on the house, impacts to neighbours, snow storage and pedestrian connectivity.

While some of those issues were addressed at the Dec. 8 meeting—and the setback on the house was removed—some councillors ultimately felt they didn’t have enough information to support the project.

“I feel like we all want to make sure the neighbours’ concerns are addressed, but we’re feeling really restricted in our ability to do so,” said Councillor Leah Noble.

However, many of the lingering questions councillors had will only be answered when the applicants enter the subdivision approval process, which will require them to prepare a detailed engineering design, to be reviewed by a provincial Approving Officer.

That officer could take council’s recommendations but is not required to, council heard.

“I get the cart before the horse in the order of things, but then it feels like council’s given approval to something that hasn’t been fleshed out, so that’s where there’s lack of comfort,” said Richman.

He went on to make a motion to support the development variance permit, which was voted down.

Coun. Amica Antonelli then made a motion to repeat the previous motion, but also added a request that the applicants address the issues raised during the meeting.

That motion temporarily passed, but staff quickly clarified that when it comes to development permits, if a motion is not approved it means by de facto it’s refused.

To that end, the motion had to be rescinded before council ultimately passed a motion that stuck. They asked staff to go back to the applicants to give them the option to address council’s concerns and reapply, with council potentially waiving the six-month waiting period.

Sabre Way to get new name

Council voted to approve a request to change the name of Sabre Way to Sunstone Way.

Sunstone Ridge Developments Ltd. requested the name change of the municipal road to help with wayfinding to the entrance of its Sunstone Ridge subdivision.

The road was named in 2014 after Art and Nellie Den Duyf donated recreation land to the Village and asked that the street be named Sabre Way.

Council approved that request in 2017.

Later that year, the Village passed a new street-naming bylaw. After Sunstone requested the name change—which staff said met the criteria laid out in the bylaw—they went back to a Den Duyf family representative to ask what they thought about the change.

“We were told that they would be agreeable to the proposed street name change and that’s given the fact that the Village has already offered to name a major facility on the recreation lands in recognition of the family’s donation,” said Lisa Pedrini, manager of development services for the Village.