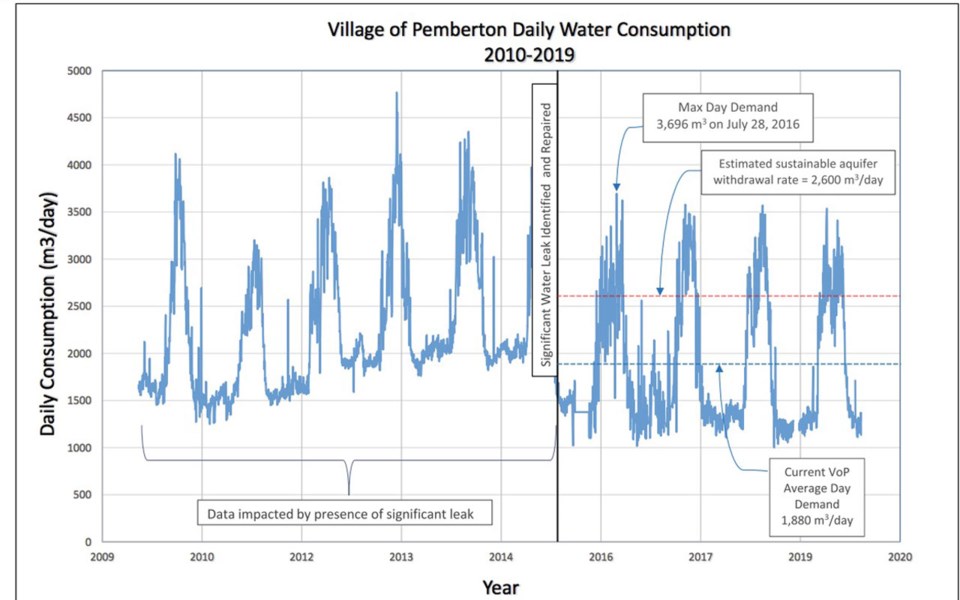 WATER USE This graph shows Village of Pemberton water consumption from 2010 to 2019. SCREENSHOT

The Village of Pemberton (VOP) will likely require some big-ticket water system upgrades in the coming years, according to a report from assistant manager of operations and projects David Ward.

Wells within the VOP have tended to produce water with increasing iron and manganese levels over time, explained Ward. The current main well, Well 3, surpassed the aesthetic maximum of manganese during this year’s testing, though it is within the Government of Canada’s maximum allowable concentration (MAC). The report concluded that the village has between four and six years before the levels surpass the MAC. As testing has not yet discovered a suitable replacement site, the report recommended treating the water for manganese and iron in the future.

What has baffled operations staff is why levels rise when they do. For the first several years of Well 2’s use, it saw minimal levels of both elements, but eventually saw a spike and it was relegated to backup status in 2014 in favour of Well 3. However, Well 3 is now starting to show some of the same tendencies, with levels of manganese starting to tick upwards and Ward expecting to start seeing rising amounts of iron within the next couple of years.

In an effort to determine what is happening, Ward said crews are now testing water quality monthly as opposed to annually to see if factors such as time of year have an effect on the levels.

“The numbers just seem so hard to follow,” Mayor Mike Richman said as he asked for an explanation. “They spike and they fluctuate and they move all around.”

“It’s really hard to say because it’s 130 feet [40 metres] below the ground. It’s hard to explain or think of what could be causing these fluctuations,” Ward said.

While redeveloping a well when needed is a stopgap that can extend its life, there are a finite number of times it’s a viable option. Ultimately, the water will need to be treated for manganese and iron down the line, with Ward noting that the process for both is similar.

The treatment plant would run in the “millions of dollars,” he added.

Another concern is consumption levels. Though the town’s population growth has slowed in recent years, new development and continued growth will result in a 30 litre-per-second usage rate, the sustainable pumping rate for the source Pemberton Creek Fan Aquifer, within the next 15 to 20 years. The report recommends seeking a new source, improving leak detection and repair, and encouraging water conservation efforts.

Ward noted that consumption rates from roughly 2010 to 2015 are skewed because of the eventual discovery of a toonie-sized leak in a pipe, with usage even depleting the aquifer at some points. Recent consumption rates show an encouraging downward trend ever since.

However, the Village’s per-capita usage is still significantly higher than an average municipality at 611 litres per day compared to the average of 427 litres per day.

“There is room for improvement for our water consumption, either through water conservation measures, sprinkling restrictions, [and] identifying and repairing leaks,” Ward said. “If we could really lower our consumption to be more in line with the Canadian average, we could extend the life of the aquifer for a noticeable and a significant amount of time.”

Still, to be prepared, the municipality has been socking away cash.

In an interview following the meeting, Richman said council has long been preparing for these projects.

“These are all big-dollar projects for a community like ours and so we are not just starting to consider this. We’ve been considering this for a while,” Richman said. “We’ve been working for a number of years to build up our reserves and our water service.”

Chief administrative officer Nikki Gilmore said no grants currently exist to help defray the costs of such projects, though the VOP will stay attentive for opportunities. Long-term borrowing would be an option if needed.

In addition to tapping every potential funding source, Richman also stressed the importance of ensuring other potential beneficiaries are identified.

“I’m hopeful that we are continuing to have conversations with Lil’wat Nation and looking at, potentially, joint aquifers, how we can approach this together and maybe we could supply all of our communities together,” he said during the meeting.