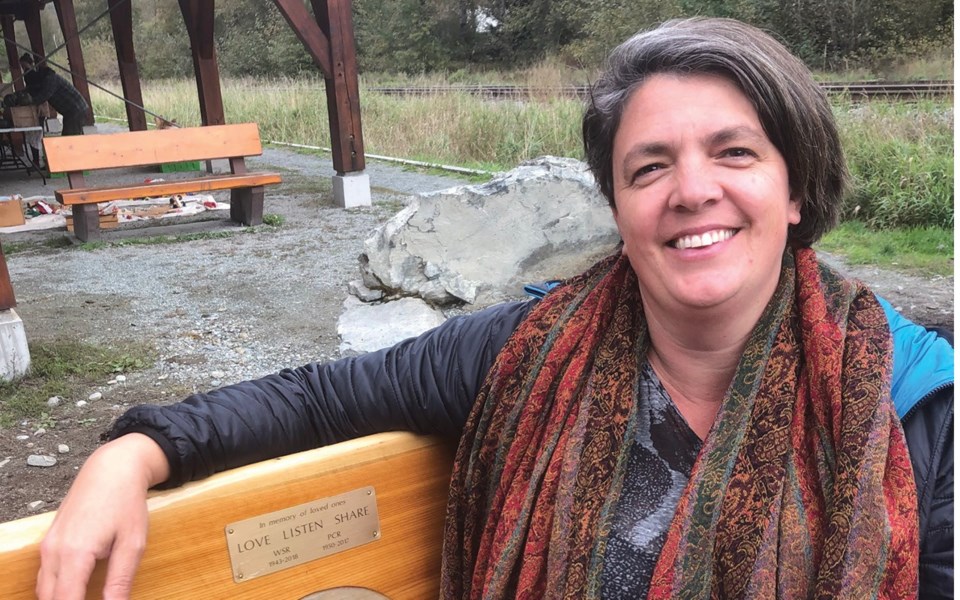 Lasting legacy Molli Reynold­s—pictured here, on a bench dedicated to her parents, Bill and Pam Reynolds­­­—is moving on from her role of managing the Pemberton Farmers' Market. photo submitted

Molli Reynolds, the manager of Pemberton Farmers' Market, is moving on after an impressive tenure that saw new events added to the popular market's schedule.

The move comes a year after the farmers' market was awarded the Farmers' Market of the Year award (for its category) by the BC Association of Farmers' Markets.

Yet despite the accolade, Reynolds, who sold handmade products at the market prior taking on the managerial role, remains humble about her overall approach to managing the busy event.

"What I lack in experience, I make up in enthusiasm," said Reynolds, who took the job in May 2016.

Reynolds' role saw her organizing vendors, making sure that everyone was paid, and organizing a number of special annual events that helped breathe life into the market.

One such event, the zucchini race, was held for "no other reason but to have fun," she said.

Participants strapped their zucchini on wheels and sent it speeding down a ramp—with some going as far as painting their zucchinis. Held over the past three years, the event was a big hit with kids and parents, said Reynolds.

The event was held in the barn in 2018, but moved to the Pemberton and District Community Centre, due to construction associated with the downtown enhancement project this year.

"I've always loved theatre ... and I always wanted to put theatre in a barn," said Reynolds.

She said that her goal, and the goal of the market's board, has been to create a family friendly vibe that attracts people to hang out. The weekly music and the fact that all of the vendors sell under one roof have been keen to its success, she said.

"People enjoy just sitting there listening to music," said Reynolds. "On any given day, there's just a nice family mood."

Matt Prescott, acting chair of the Pemberton Farmers' Market, said he was really impressed by Reynolds' hands-on approach to her job.

He recalled watching her fill in for vendors when they went to the washroom, taking things down at the end of the day, and "doing all of the extra little things" that create a positive experience for visitors and vendors alike.

"Her biggest contribution was her enthusiasm," said Prescott. "She loved the market a lot and was always working on making it better."

Prescott cites the Stone Soup Celebration, which saw chefs make delicious soups out of vegetables donated by Pemberton farmers, as an event that Reynolds started that will carry on.

"It's become a signature Pemberton Farmers' Market event that that we look forward to," he said.

Reynolds, who works as a teacher at the Whistler Waldorf School, explained that she applied for the position due to challenging life circumstances.

"At the time, I had just stepped back from some full-time work [at the Whistler Waldorf School] because my mom was at home with cancer," she said.

"I decided I needed a little something extra and [the market manager position] was perfect, because I could do it in the summer months while I wasn't teaching."

With her parents having both since passed, Reynolds went back to full-time teaching this year.

"I love the market so much, but I just can't give it my full attention when I'm working full time," she said.

But with her unabashed "love" for the market and the new friends she's made through it, she won't be a stranger, she said.

"I don't want to say I'm going to miss it, because I'm going to come back as much as I possibly can," said Reynolds. "I'll try to be there every week."