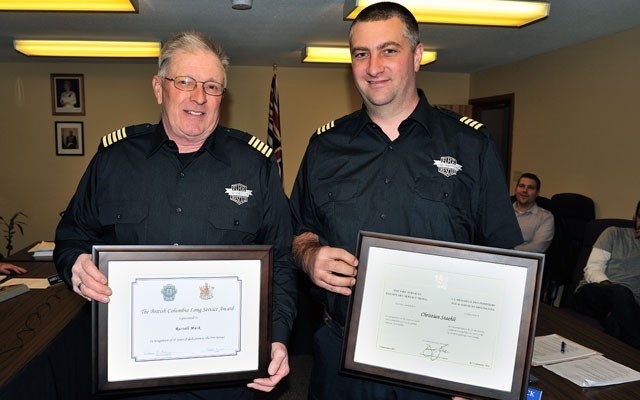 a storied career: Pemberton fire chief Russell Mack, left, and former deputy chief Christian Staehli receive Long Service Bars from the Office of the Fire Commissioner in 2012. Mack will retire as chief in October after 18 years on the job. file Photo by dave steers

A little bit of arm-twisting marked the start of Russell Mack's career, one that will end later this year after more than four decades as a firefighter.

Mack, who has served as Pemberton's fire chief since the mid-1990s, has announced he will retire from the post in the fall after 41 years as a first responder.

Firefighting wasn't his first choice, however, as he started out as a small-engine mechanic for the City of Richmond before falling into his longtime line of work.

"I was always working on the small equipment for the (Richmond) fire department, and the deputy chief would say, 'You should apply here,'" recalled Mack. "I'd say, 'Nah, nah.' Finally, I decided it would probably be a good idea, and I'm really thankful I did, because it's a great career. It really is."

But Mack feels the time is right to hand over the fire hall to a new leader.

"It's time to get somebody younger in here again and take it up to another level," he said.

Mack came to Pemberton to take over as fire chief in 1996. He's seen the department improve and evolve significantly since his arrival.

"Things have changed dramatically, obviously, since those years," he said. "We've got lots of good equipment; all the trucks are fully equipped. Everybody gets all the training that they need and all good safety equipment as far as turnout gear.

"I've been fortunate, with all the different mayors and councils and the regional district director, I've always had their full support, which really helps when it comes to budget time. It's been really good in that respect."

Local MLA and longtime Pemberton mayor Jordan Sturdy said much of the credit for the department's growth over time belongs to Mack.

"He has brought the level of the department up in orders of magnitude," said Sturdy. "His experience has benefitted the greater community in terms of practical applications of processes, procedures and training, and he brought a level of professionalism that didn't exist before his tenure. He's been a real asset to the community overall, and specifically to the fire department."

"I didn't know too much about him coming in, but immediately, he brought a whole bunch of knowledge, experience and expertise to the department. A lot of new equipment came on board and a little more structure came with it," said Staehli, who said Mack is like "a second father" to him.

"He's someone that I trust with anything. He's a hunting partner now and somebody who will help you out at the drop of a hat at any time."

And it's that ability to lend a hand that Mack has found rewarding during his long tenure.

"The satisfaction of just helping people out when they need help is the biggest thing," said Mack.

He said he doesn't think he'll be too emotional about giving up the fire chief's title until his official retirement date draws nearer. After all, there is plenty for him to remain focused on in the months ahead.

"We've got a pretty busy summer coming up here with the (Pemberton Music) Festival, Ironman and all the stuff that's going on. Hopefully we don't have too big of a fire season," he said. "We don't have much of a snowpack, so that's kind of a concern. We'll have to see how the weather goes between now and the first of July."