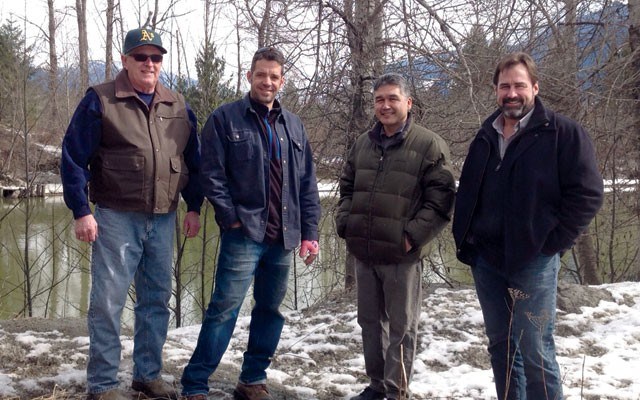 A $500,000 grant from BikeBC takes the key partners in the Friendship Trail and Bridge a step closer to reality for a community project that's been in the works for years.

The dream is to create a connecting route away from the highway that would link the Village of Pemberton (VOP) and the Lil'wat Nation; the next step will be to assess further construction for the bridge, and the trail.

"The trail will expand both transportation and recreation opportunities for everyone in the region," he said.

"It will also create greater safety for those travelling by foot, bicycle or horseback. People will no longer have to risk sharing a highway with vehicles travelling 80 km/h or more. Instead, they'll enjoy peaceful travel and fantastic views of Lil'wat Traditional Territory."

VOP Mayor Mike Richman said: "The idea was to build the project without going to the taxpayers for their money. This (funding) should close that gap."

"It's been a patient process that we haven't let go of to keep gathering those funds and now that it looks like that funding gap is closing. It's really exciting," Richman said.

The trail and bridge would connect the VOP to the community of Mt. Currie safely, and allow users to walk, ride or travel on horseback.

"There's a symbolism to it — I believe it makes another kind of connection between the communities," said Richman.

"This will allow people to travel back and forth between the communities safely, which is huge."

Said West Vancouver-Sea to Sky MLA Jordan Sturdy: "(The) project will help the region realize the long-standing goal of connecting Pemberton and Mt. Currie through a safe and accessible non-motorized trail that will support active lifestyles, provide alternatives to the car and literally build a bridge between neighbours."