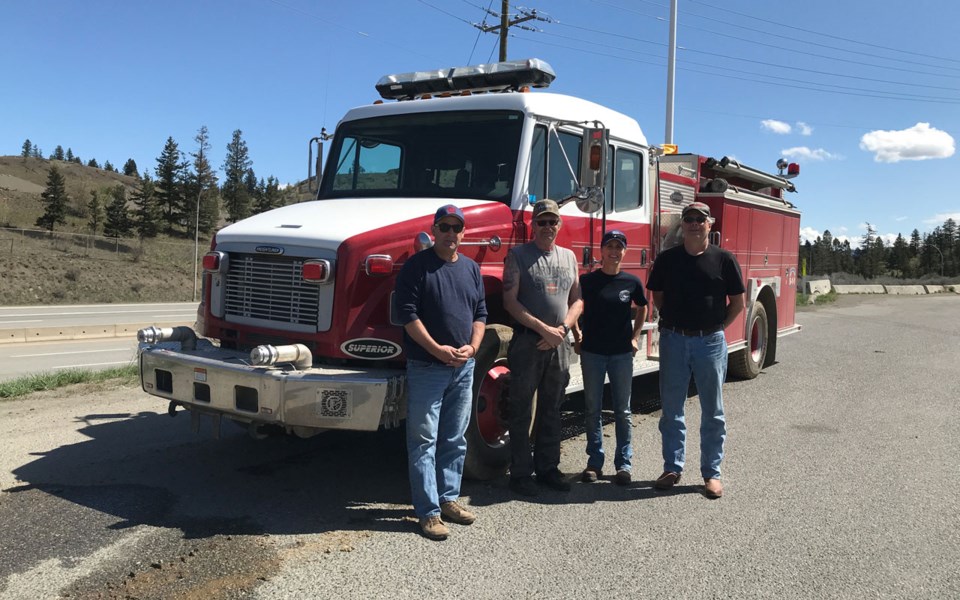 Roughly 150 Pemberton Meadows residents will be able to tap into some home insurance savings.

That’s because the Pemberton Meadows Fire Protection Area has now achieved semi-protected status from the Fire Underwriters Survey (FUS), an upgrade from its previous unprotected status.

It’s been a long process, according to Kim Marshall, who served as a director and handled administration for the Pemberton Meadows Fire Association (PMFA) during the process.

The organization started in 2016 and had to tick several boxes, consulting with the Village of Pemberton (VOP) and Squamish-Lillooet Regional District (SLRD).

One major project, according to Marshall, was working with the Pemberton Fire Rescue Service (PFRS) to complete a survey of all available water in the upper part of Pemberton Meadows for FUS.

“We had to get water sources and prove that we had available water because there obviously are no hydrants out here,” she said.

On the administrative side, the PMFA had to have 15 working members, as well as a board of directors, and hold an annual general meeting.

“All these [efforts] were from people like myself who had no previous experience in any of this,” said Marshall, a retired air traffic controller. “It was the blind leading the blind.”

The major stumbling block came, however, after the association had acquired three older fire trucks, but were unaware that they could not be older than 20 years old.

“We failed epically,” she said, before noting the PMFA subsequently raised $50,000 through events and a GoFundMe for a newer truck from Bonnyville, Alta., which arrived in early May.

With the status approved, homeowners can now tap into savings. In an email, FUS director Robert McGuinness said homeowners looking to ensure the semi-protected status is being considered when their rates are calculated should contact their insurance companies directly, as they will have access to up-to-date information via fireunderwriters.ca.

“The updated information is published on the Fire Insurance Grading Index,” he wrote.

Marshall herself renewed her home insurance on July 1, and saw the benefit.

“They recognized the semi-protected status, and the savings on mine was $400 to $500,” she said. “I don’t think it’s as much as people had hoped … but if that’s incorporated into every household, that’s a significant savings.”

Another resource was SLRD Area C director Russell Mack, who was the Pemberton Fire Rescue Service chief for 18 years.

“He definitely saw the need, basically, because we’ve had, up to this year and last year, quite severe fires in the area,” Marshall said on Aug. 16, before lightning-caused fires started in the Pemberton area. “He was a huge advocate for us. I don’t know how far we would have gotten without him.”

She also credited Chief John Beks for his heavy lifting.

“He’s salt of the earth and very passionate about it,” she said.

As the volunteer board learns more about how to operate, it has become more efficient.

“As time has progressed, we’ve got a great team of five directors now that really make a big difference,” Marshall said.

As for better service, Marshall said the department primarily supports PFRS efforts in the area, as its members can battle external fires but can’t enter a residence. Living 20 minutes from Pemberton herself, Marshall appreciates knowing the service is in place.

“We are simply there to provide water, pumping service,” she said. “There were a couple incidents that we had where we were able to get there first and because they [were] external, we were able to quash the fire.”

Down the line, Marshall said the PMFA hopes to achieve protected status, but acknowledged that the land acquisition for a station may make it a “pipe dream.”

“Our ultimate goal is to have a fire station, so we are applying for land at Wilson Road,” she said. “If we are able to have a truck there, it’s eight kilometres in either way, and then that would cover us off, we could potentially get protected status.”