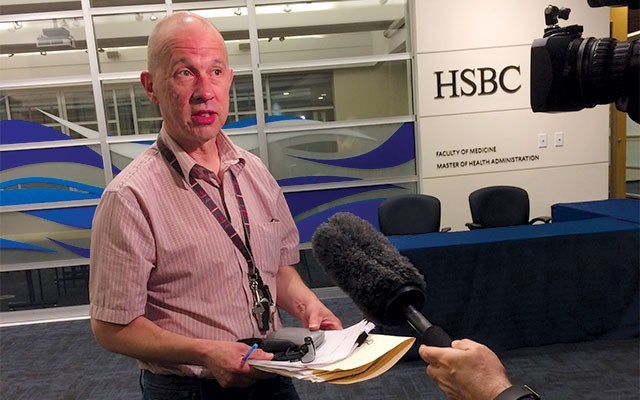 The numbers are coming in for the Pemberton Music Festival (PMF) and they appear to show that the bankrupted event was doomed almost from the start.

Around 20 creditors and legal representatives wanting clarity on the festival's collapse were at a meeting at Robson Square in Vancouver, where they heard a representative from trustee Ernst & Young (EY) read a preliminary report into the festival's "consolidated bankruptcy."

And U.S. festival organizer Huka Entertainment, which ran PMF, did not come out of it looking good.

When Pemberton Music Festival LP (PMFLP) collapsed on May 18, no fewer than 10 companies were involved as partners at various levels.

The two main Canadian investors behind PMFLP — 1644609 Alberta Ltd. and Janspec Holdings Ltd. — were originally named secured creditors who would be repaid first, but they agreed to waive their entire claim just prior to the June 6 meeting.

The two lost much more than this over the course of their involvement with PMFLP.

Kevin Brennan of EY ran through the business history of the festival, which he said was initiated by local investors The Turner family (Janspec), when they approached Huka in 2012 to revive the festival that failed in 2008. They turned to Huka because it was experienced at festival creation and operation.

The 2014 Pemberton Music Festival lost $16.9 million, which was covered in its entirety by the Canadian investors.

At this time, the investors told Huka they wanted changes to PMF oversight and the ownership structure of limited partner H1 Events, started by Huka.

In 2015, the festival lost a further $16.8 million, with investors questioning their losses and further involvement with PMFLP. They were placated by Huka promising increased ticket sales leading to breaking even, Brennan told creditors.

But in 2016, the festival incurred another operating loss of $14 million, with Huka informing the investors in Sept. 2016 that a further US$2 million was required from them to cover some outstanding payables and help Huka find a new investor.

Such money requests over the almost four years of the festival were common, according to EY documents.

In 2017, early-bird tickets went on sale Feb. 23 with the main ticket sale launched on May 2, 16 days before the plug was finally pulled on the festival, which was set to run July 13 to 16.

The investors were concerned by the length of time it was taking to announce performers, while the impact of the low Canadian dollar had been a problem since 2015, as performers are paid in U.S. dollars.

Brennan ran through tens of millions of dollars of losses to the main Canadian investors over the course of three festivals.

Promissory notes signed by the parties remain unpaid by Huka.

He told creditors there had been "no satisfactory response" from Huka and a former accountant over EY's request for financial records for earlier years of the festival.

It took around an hour to unravel the labyrinthine situation at the meeting, which was chaired by representatives from the Office of the Superintendent of Bankruptcy Canada.

Canadian investor Jim Gales, who joined PMFLP in 2014 and is a secured investor in the bankruptcy proceedings, was present at the meeting but declined to speak to journalists about the situation or his losses.

A lawyer for ticket sellers Ticketfly, which sold tickets purchased on the PMF website, was also at the meeting, but wouldn't comment publicly. The company has been at the centre of the collapse since an unknown number of 2017 ticket holders are owed $8,225,000.

Following the Ernst & Young presentation, he said his company had been contracted each year for the festival.

The firm supplied electricity and equipment to operate the Pemberton Music Festival site.

"I think there will be nothing left. There are no assets to cover the liability — they owe roughly $13 million and have potentially $3 million," he said.

Nielson said in his company's case, they are not in danger of bankruptcy, but the loss is a significant one for a small company.

Neilson provided a detailed account of how Huka carried out business with him — it was the only company out of those mentioned in the bankruptcy proceedings that he dealt with.

One reason the annual losses were so high, Neilson said, is because Huka would bring in out-of-town — typically American — suppliers to Pemberton. For example, his company would normally supply electricity from BC Hydro, but not in this case.

"Because (Huka was an) American producer they insisted in bringing in their own generators. They didn't trust our local utility," Neilson explained.

"So they spent probably three times what they should have spent to bring up generators from Los Angeles. No one here was good enough to do the job for them."

He added that Huka did this with Pemberton Music Festival's staging, security and other operations needed to build the festival.

"The fact that they're $16 million in the hole is self-caused. No one did this to them, they did this to themselves. It ran them into constant debt year after year and they never recovered," Neilson said.

He added that even when he did get paid by Huka, they were late with payment each year, providing half during the festival in July and the remaining half the following February.

Neilson said he would be happiest if ticket purchasers were reimbursed first.

"It's as though we are all the investors being held responsible for their mistakes," he said.

"They should have cancelled the festival in the second year when they kept losing money."

Even the Lil'wat Youth Soccer Association is owed $3,750.

When the festival was declared bankrupt, Huka released the following statement: "We are heartbroken to see the 2017 Pemberton Music Festival cancelled.

"As a contract producer, Huka did not make the decision to cancel the Festival. That decision was made by the Pemberton Music Festival, LP. We are extremely disappointed for our fans, artists and all of our partners who have supported the festival over the years."