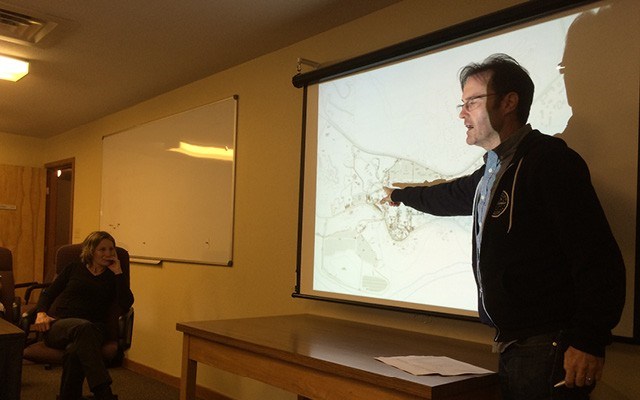 festival floorplan Dave Fortune, associate producer of the Pemberton Music Festival, shows off a map of the revised festival grounds to Pemberton council on June 2. photo by braden dupuis

Returnees to the Pemberton Music Festival might notice some minor changes to the site layout when they arrive this July.

Most notably, each morning before the main gates open campers will be able to hang out in the festival's "lobby" — the area that housed the farmer's market vendors at last year's festival.

"This year that area is going to open at 8 a.m. — potentially even a little bit earlier — to be kind of a morning zone," explained Maureen Douglas, director of community relations for the festival.

"There will be early morning yoga, there will be people serving breakfast, the farmer's market space will be in there so (there will be) access to fresh produce."

There will even be early morning cartoons playing on a big screen, added Dave Fortune, the festival's associate producer.

Douglas and Fortune gave an update on the festival's operations and outreach at the regular meeting of the Village of Pemberton council on June 2.

Other changes coming this year include the removal of the Blackcomb stage — which Fortune said was the cause of some noise problems for residents in the Plateau — in favour of a craft beer garden space and some re-organizing of parking and camping spaces.

Security at this year's festival will consist of about 50 crew chiefs working directly for the festival, Douglas said.

"Each of them will have various companies that are recruited and work specific to different zones so they'll really know that space, they'll understand their role very clearly, as opposed to asking one firm to try and go and recruit 300 people which proved to be a little bit of a challenge last year," she said.

On-site medical services will once again be provided by the "rock doc" Dr. Sam Gutman.

A job fair scheduled in Mount Currie for June 4 has been postponed. A new date will be announced shortly.

A youth volunteer fair is scheduled for June 10 at 3:30 p.m. at the Pemberton Community Centre.

A community information session will also be held at the community centre on June 10 at 7 p.m.

Results for Pemberton's recent Alternate Approval Process were revealed at the June 2 meeting of council.

It would have taken 190 responses, or 10 per cent of the electorate, to stop the village from pursuing a $1.2 million loan for a new water reservoir.

Only one electorate response was received.

As such, the village will now move ahead with the borrowing process, which must still be approved by the Squamish-Lillooet Regional District's board of directors.

Also at the June 2 meeting, a report was brought to council stating that councillor Joanne Molinaro indicated she has a direct or indirect pecuniary interest in a Village of Pemberton contract.

On May 1, Sabre Excavation Corp. — of which Molinaro is a co-owner — was awarded a contract in the amount of $504,000 for miscellaneous water and electrical works on the new reservoir project.

Councillors are not prohibited from having contracts with the municipality, but Section 107 of the Community Charter states that a councillor must disclose if they have a financial interest in a municipal contract.

Also at the June 2 meeting, council gave fourth and final reading to its 2015 water and sewer rate bylaws.

The review found the new rates necessary to meet the increased operational costs of the system.

While finance manager Lisa Teggarty and development services and public works manager Pete Neff are both gone, the Village of Pemberton has already filled one position and posted the other.

At the June 2 meeting of council, Mayor Mike Richman said that Lena Martin, senior accountant with the Squamish-Lillooet Regional District, would be joining the village as the new finance manager.

"The manager's position for development services and public works is currently posted and I'm looking forward to starting that process," Richman said.

But while the village moves forward with those positions, another staff member moves on.

Executive assistant to the CAO Bettina Falloon has also tendered her resignation with the village, Richman said, adding that Falloon will be moving on to other opportunities.