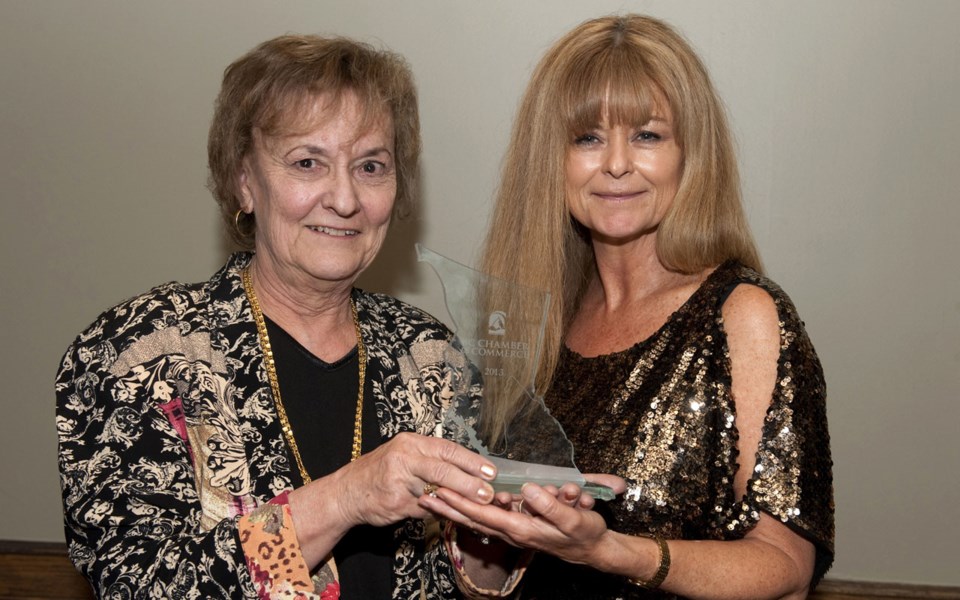 PEMBERTON PROMINENCE Shirley Henry (left) receiving an award from the BC Chamber of Commerce in 2013 for her many years of contribution to business organizations. PHOTO SUBMITTED

Back in 1964, Shirley Henry stepped off a train with a baby in her arms and into the quiet mountain town she would call home for the rest of her life.

Her husband, George, who had just taken a job teaching metal and woodwork at Pemberton Secondary School, catalyzing the move from 100 Mile House, got a flat tire and was late picking them up.

Surveying her new surroundings—complete with its dirt roads and tiny population—she promptly burst into tears, according to Mike Henry, who was that new baby.

It might have been a rocky start, but Henry would go on to become a staple in Pemberton—as its longest-serving mayor and in several other leadership and volunteer roles over 56 years.

Henry passed away on Sept. 28 at the age of 79 after a battle with cancer.

“I know she really loved Pemberton,” Mike said. “Everywhere she went, she compared Pemberton to other places. She felt it was her town.”

While she was a teacher before the move, and served as a local substitute teacher, her roles in the community over five decades are almost too numerous to list: she served as alderman from 1975 until 1978; she became mayor for 15 years from 1979 to 1993; she was a director of the Squamish-Lillooet Regional District; she was involved in Cubs, Brownies, Girl Guides; and she was a chairperson for the Canada Week Committee for 25 years.

Her “crowning achievement” though was helping to bring the Pemberton Airport to life, Mike said.

“Now it’s a big asset to the community and used all the time,” he said. “She sat on the board of the B.C. Aviation Council.”

More recently, and up until her death, she was secretary-treasurer of the Pemberton & District Chamber of Commerce, Tourism Pemberton, the Pemberton Community Endowment Fund, and Winterfest.

She also was a supervisor at the Pemberton Visitor Centre.

“When I was mayor, she was there with Tourism Pemberton and helped get [that organization] going,” said incumbent MLA Jordan Sturdy. “She got that tourist booth in place—and never really left that booth for the whole time it was open.”

One image that encapsulates her leadership for Sturdy is in a video of the flood of ’84. “I just remember her being drenched, clearly in the trenches, doing everything that needed to be done with a small town in a big disaster, responding,” he said. “I’ll never forget that picture of her on TV, water running down her face, her hair completely matted to her head, but telling people what had to happen and directing things. [She went] after senior level governments to get here and help us out. It was really inspiring.”

Henry received many accolades and awards over the years as well. “In her office there’s this wall full of awards,” Mike says. “She’d prefer to work for nothing and get a little plaque than work for money.”

That ranged from a community award from the BC Achievement Foundation in 2018 to the Queen’s Jubilee Medal in 2002, Year of the Volunteer Award in 2000, Freedom of the Village of Pemberton in 1996, and the Pemberton Chamber of Commerce Community Service Award in 1975.

“You can’t even measure the impact and contribution she made on this community,” said Village of Pemberton Mayor Mike Richman. “Not only did she make those contributions, but she, in my mind, is what makes this a special place. That sense of community she lived all the time is what makes Pemberton special.”

While it was announced back in 2018, a final tribute will be a new park located in the Tiyata Development, called Henry Park, in honour of both Shirley and George, who passed away in December 2018 and was also a massive contributor to the community both as a volunteer and long-time teacher and vice principal.

In a note dictated to her daughter Michele before her passing, Shirley thanked friends and family for their support and love.

“My wish for all of you—take every opportunity that comes your way,” she said. “Some will be very successful and rewarding, others not so. Fill your life with many memories and no regrets. I love you all and will always be looking over you.”