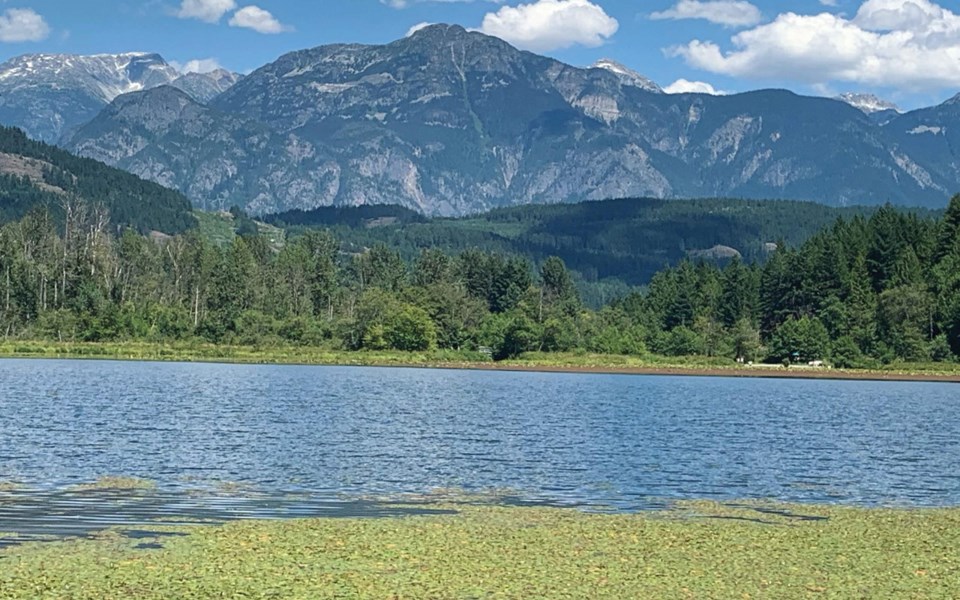 Village of Pemberton (VOP) council had a busy day of reports from several departments at its most recent regular council meeting on July 28.

As always, the operations department is working on several projects on which manager of operations and projects Tom Csima briefed council.

Heading the list is the One Mile Lake fish habitat restoration work, which is currently ongoing.

Csima described problems related to beaver activity in the inlet connecting Pemberton Creek to the lake, which is blocked with dams and overgrowth.

With the federal Department of Fisheries and Oceans (DFO) taking the lead, there are plans to construct a new inlet channel to get more freshwater from the creek. This will decrease weed growth, make a more ideal habitat for salmon with more cold, turbid water and help create a passage for salmon migration. As well, crews will build a trail next to the channel to help facilitate future maintenance.

Csima said the Pemberton Valley Dyking District has provided an excavator to help with the work while a Lil’wat Nation environmental monitor is also contributing.

In June, crews replaced a damaged beaver box in the outflow section and unclogged a culvert. As a result, the lake levels decreased, which Csima said was a sign of success. Once the inlet work is finished, likely in mid-September, there will be more noticeable differences.

“The hope is, if we can get the channel clear coming in, we’ll start to see it being refilled with that nice, fresh cold water,” he said.

In terms of beaver populations, Csima said there is no way to successfully relocate the animals, according to the DFO and Ministry of Environment.

“The only real way to get rid of the beavers, unfortunately, is lethal traps,” he said. “Anytime you relocate them, you’re either passing the problem on to someone else or you’re putting them in a situation where they won’t survive anyway.

“Beavers can be territorial, so if they’re away from their home, they don’t really stand much chance.”

Csima said that, for decades, a trapper helped control the beaver populations, but stopped that work about 10 years ago, and there has been significant growth in that time.

There is an expectation that once both ends are flowing well that it will naturally take care of the invasive goldfish problem discovered earlier this summer.

The Ministry of Environment’s invasive species council collected video evidence of the goldfish, but was not able to catch any, Csima said.

“Because they weren’t able to catch any, it shows that they’re probably not overpopulating the lake yet,” he said. “They’re not likely to travel because they don’t like the cold, turbid water. They won’t go up into Pemberton Creek and on to Lillooet Lake or anywhere else.”

Allowing more cold, turbid water into the lake should “eradicate them,” Csima said.

In terms of water quality, it is still safe for swimming. The lake water is tested weekly, with low numbers of coliforms found. Results are available at https://bit.ly/2XO9D9W.

During the meeting, Councillor Leah Noble brought up safety concerns after hearing that dogs and children have recently fallen off the boardwalk and people have had difficulty pulling them back up.

She proposed ladders being installed at regular intervals, though Csima fears this would encourage swimming in areas where it shouldn’t happen while noting that existing ladders require regular maintenance.

He added that funding for boardwalk accessibility is coming soon, and operations will consider safety measures at that point.

The diffuser ports were discovered to be blocked by up to three metres of sediment from the 2010 Capricorn slide, though it was less than that in the end, allowing for some cost savings.

With the sediment cleared, crews took several mitigating measures, including a clean-out tee at the shoreline, allowing crews easier access at future blockages and making it easier to flush the line. As well, it was difficult to find diffuser assembly in the sediment, but when it was discovered, crews attached hoses to the end so even if it gets buried, hoses will sit in the water and allow for flow to continue. As well, crews added a crossbeam connecting the feet to keep the ports from sinking into the river.

“Not only was the sediment building up on top of it, but the riverbed was degrading,” Csima said.

The infrastructure previously had an articulated concrete mattress on top of the outfall pipe. However, it was completely washed away, allowing for the scouring that caused the pipe to sink. With no time to source a new one, crews used large boulders to line the riverbed and provide stability and prevent scouring and degradation.

Csima can’t say all the efforts provide a permanent fix, but hopes it’s bought the VOP “a significant amount of time” to find one.

“There shouldn’t be a blockage caused by the sediment build-up, but at the same time, this sediment, as we know, is going to keep coming,” he said. “It might be something that, down the road, we need to look at modelling the river and continue to survey and see what’s going on.”

Within two weeks of the project completion, the excavation was once again filled with sediment.

“It will need to be assessed on a regular basis to see how it’s performing. We also plan to have the divers come back on an annual basis, which is a small cost relatively speaking [roughly $4,000],” he said.

Other future work includes conducting a follow-up survey to see how the riverbed has changed as well as installing an in-line flushing system to create constant flow.

In the midst of an unprecedented year because of COVID-19, the VOP’s finance department is cautiously optimistic in its second quarter report.

Revenues are high, she said, because the VOP invoiced for taxes and received non-recurring grants early in the year. There will be additional revenue coming as projects are completed or, in the case of some funding, underway.

Cash flow and reserves are at levels allowing planned projects to continue, she said.

“All managers from all departments do check in with [chief administrative officer] Nikki [Gilmore] and myself to see how our cash flow is if we have large expenditures coming up just to make sure we have enough to cover what we’re doing,” she said.

Anticipated major expenditures for the rest of the year are seasonal work such as snow clearing, park closures and other winter operations.

Meanwhile, tax payments have come in at an encouraging pace. The provincial government granted several property classes an extension on paying property taxes until Oct. 1, though Martin said there hasn’t been much difference from a normal year.

“Currently, I don’t see a high risk for continuing our year,” she said.

The lion’s share of property tax is from residences and was due July 2. At the deadline, $500,000 of the more than $1.2 million was outstanding. When utility fees are considered as well, roughly 22 per cent of fees were still outstanding, which Martin said is typical for an average year, as only $27,000 of utility payments had not been made.

Several other property classes are mostly paid, with some being completely paid, even with months to go before the deadline.

“That gives us cash ahead of the Oct. 1 deadline, which helps us out quite a bit,” she said.

Martin added that the third quarter report will reflect results of the annual audit, which was presented earlier in the meeting (“Village of Pemberton OKs gas tax money for EV chargers,” Pique, Aug. 6).

“We will have to apply any audit adjustments that we have, but this will give us a good look at where we are as a point in time, and how we’re working toward keeping within our budget toward the end of the year,” Martin said.

Manager of development services Lisa Pedrini reported that the department collected $58,400 in permit fees on construction values of $7,821,384 in the second quarter.

She also noted that the Crestline project will soon boast a new name and new format, with 77 rental apartments rather than original proposal of units for sale.

In terms of long-range planning, the department is continuing work on the affordable housing action plan. The department recently had a meeting with Andrew Middleton from Canadian Mortgage and Housing Corporation and talked to the Lions Group to gauge its interest in submitting to BC Housing RFP for new rental housing under the community housing fund, potentially as Phase 3 of Lions Villa.

Coming up, Pedrini said it will be key for the VOP to connect with the community about the trade-off between more affordable housing and increasing density. She is planning to hold COVID-friendly consultations later this year.

“It is our intention to have information boards available that people could view online, maybe a video that we could put together with a presentation from staff,” Pedrini said. “They could view [it] and then answer some questions.”

As well, the department is continuing work on the climate action plan, though she acknowledged that the budget for that type of work is “quite slim” and they are seeking outside help.

“I know that we didn’t put a strong enough budget toward our climate action plan. We did keep a zero-increase budget and that’s one of the reasons,” Mayor Mike Richman said.

While acknowledging Richman’s suggestion of connecting with neighbouring municipalities in Whistler and Squamish that have completed similar work, Pedrini said that content can only do so much.

Highlights from other departments

Manager of recreation Christine Burns explained that while revenue collapsed because of COVID-19 and the resulting community centre closure, she was pleased with the uptake for online programming. As well, staff planned the summer programming in three weeks when it normally takes three months.

Meanwhile, Fire Chief Robert Grossman said the department responded to 65 incidents, down from 143 last year primarily because the department is not responding to most medical calls during the pandemic.

“We are doing medicals on a … cardiac arrest, high-priority [basis],” he said.

Post-pandemic, it will be up to council to determine whether the department will resume responding to medical calls in the future, he said. Grossman has been communicating regularly with BC Ambulance, which also said that calls are down.

As well, Grossman worked with the Pemberton Meadows Fire Department to achieve semi-protected status, which allows for not only greater fire protection but also significant insurance savings for residents.