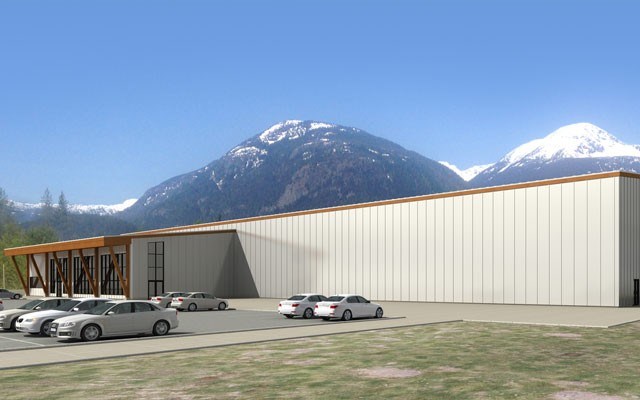 A little short: An artist's rendering of the proposed Pemberton multi-sport recreation facility's exterior is pictured. The village will need to find another funding source to construct the complex as pictured, even if next month's referendum is successful. Photo courtesy of Murphy Constuction/Village of Pemberton

The cost of a multi-sport recreation facility with three court spaces and an outdoor soccer field would exceed the borrowing capacity of the Village of Pemberton, council learned during a special meeting Tuesday, May 13.

Next month's referendum will determine if Pemberton residents support the village borrowing $4.8 million, repayable through taxation, to pursue development of a new recreation facility along Pemberton Farm Road East.

However, the final cost estimates, included in a business case prepared by Murphy Construction Corp., total $5.37 million. If voters grant permission for the village to borrow funds, the village will still have to secure additional funding through a partner or grants, or amend the facility's design to make the project a reality.

Councillors and staff stressed during the meeting that a "yes" vote on the June 14 referendum would only authorize a loan — voters will not be deciding if they support the proposed facility when they cast their ballots, nor would the village be bound to constructing the facility if borrowing is authorized.

"We have to make people understand that... this doesn't mean we're going ahead if they vote 'yes,'" said Councillor Mike Richman. "We've got to be clear that, after (a successful) referendum, we're still going to be considering partnerships."

Graham Murphy attended Tuesday's meeting to explain the details of the facility and the business case his company compiled, following community feedback and consultation with potential user groups.

The proposed facility would total 38,000 square feet (3,530 square metres), with the majority of the floor area dedicated to three playing surfaces. One of the courts, Murphy explained, would be an NBA-sized basketball court finished with maple flooring; the other two with a composite flooring acceptable for virtually all activities.

The remainder of the recreation complex would be a "front of house" area comprised of a lobby, concession area, change rooms, classroom and storage space.

Although council members were supportive of the plans in general, they did express concerns that the business case projects an annual operating deficit of nearly $100,000 in the first year after construction, including debt servicing.

Councillor Ted Craddock questioned if it would be possible to reduce the size of the facility by 10,000 square feet, which would reduce capital costs by more than $1 million. Murphy said the building is designed to accommodate a change of that kind while still meeting the needs of the community.

Last year, the village signed a memorandum of understanding (MOU) with The Hill Academy private school and Sunstone Ridge Developments to work towards construction of a new recreation complex. The athletics-focused academy wants to establish a campus on a parcel of Sunstone land, but requires a recreation facility to operate.

However, there were no official representatives of either group at Tuesday's meeting, which council members found disappointing.

"That concerns me big time, because I would have thought they would have been here with a full room of people supporting this," said Craddock. "I'm very, very disappointed in their non-attendance at this meeting, and I want them to be aware of that."

The Hill Academy hopes to begin offering classes in Pemberton by the 2015-16 school year, and the village has advanced the facility with the school's timelines in mind. Tuesday's report estimated that the building could be complete by September 2015 if construction begins this August.

Although The Hill Academy's projected rental contributions place it as one of the facility's anchor tenants, with usage increasing significantly over the first five years, council was hopeful for greater confirmation of their intent to utilize the complex.

Meanwhile, off-site servicing costs, not included in the total capital cost, are still being reviewed. Manager of development services Caroline Lamont said negotiations with Sunstone are ongoing to determine how those costs are covered.

Squamish-Lillooet Regional District Electoral Area C has been identified as a potential partner in the facility, but so far has not come on board. In past correspondence with the village, Area C director Susie Gimse had requested a business case, as well as clarity about how the facility would fit into the existing joint recreation service operated by the village and Area C — including "cannibalized" revenue from the Pemberton Community Centre if programming is relocated to a new facility — among other concerns.

Gimse attended Tuesday's meeting and felt there was "a lot of good info" in the report, but she was still hopeful for more answers.

"My concern really rests with regard to the operation of the facility," said Gimse, pointing to the projected deficit.

Gimse said she was also hopeful to hear more from the developers on their potential contributions.

The Lil'wat Nation has declined an invitation to partner on the facility, but did express interest in coming on board for future development phases that may include ice rinks and a pool.

During question period, council was asked if it would proceed with building a facility if the referendum is successful, but no additional funding sources are obtained.

"In my own mind, without another partner, I don't think I would be in favour of doing it," said Craddock.