New operations and maintenance manager shares vision for the valley
Sep 10, 2020 8:00 AM By: Dan Falloon 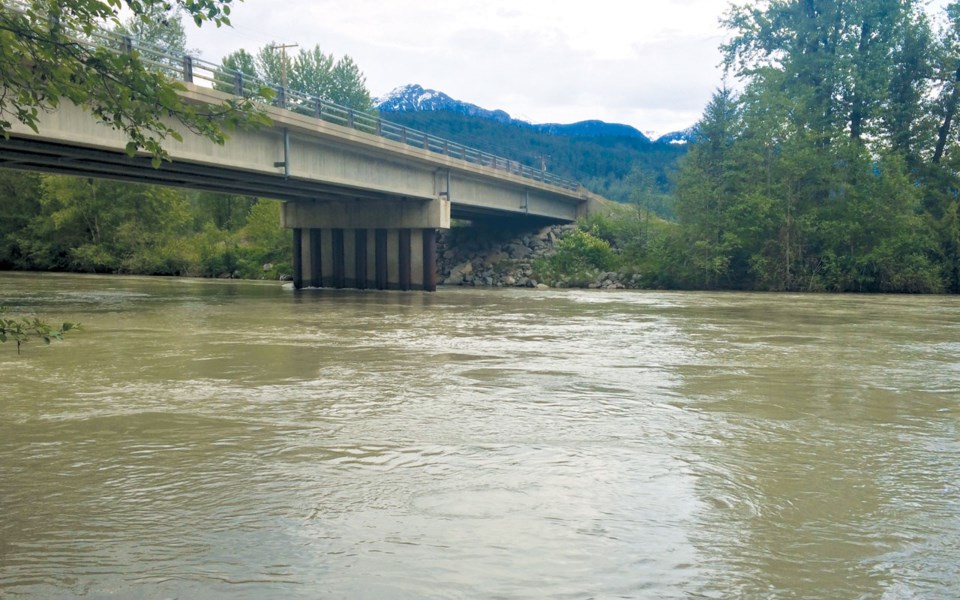 Kevin Clark, who stepped into the role in February, presented on his priorities as he looks out for the best interests of residents of Pemberton, the Lil’wat Nation and those in the Squamish-Lillooet Regional District (SLRD).

One of the pressing concerns is increasing data collection to help facilitate the best possible decision-making, he said.

While much of the monitoring focuses on the Lillooet River, other rivers and creeks in the valley can be trouble spots even if nothing seems to be amiss with the Lillooet.

The Lillooet’s highest flow rate of the year as of the meeting, 602 cubic metres per second on Aug. 21, was short of the 650-cubic-metre-per-second trigger for crews to start patrols in the area, but other areas presented some risk. The Ryan River was roughly 80 centimetres from topping the road, for one.

Clark added that the Lillooet River flow was recorded at 369 cubic metres per second at the Hurley Forest Service Road bridge, but after the Ryan River and Miller Creek flowed into it, that number surged to 602. The Green River was also close to overtopping near the golf courses, while the Arn Canal was roughly 45 centimetres from overtopping.

Thankfully, Clark said Lillooet Lake’s levels had gone down between 1.5 and two metres in the days leading up to Aug. 21 and could handle the extra water.

With the Lil’wat Nation installing a gauge on the Birkenhead River this fall and Environment and Climate Change Canada’s National Hydrological Service upgrading its Pemberton Creek systems (see more below), Clark would ultimately like to see additional gauges on the Ryan and Green Rivers, as well as on Miller Creek. Another important upgrade would be for additional Environment Canada weather collection stations in the valley, as the only current one is situated at the Pemberton Airport.

It’s key, Clark said, because rainfall can be localized and if not all rivers and creeks are receiving rain, there could be less of a flood risk while, conversely, if all are receiving rain, then it allows jurisdictions to react in the most strategic way. If an evacuation is necessary, the data would be used to determine how to best sequence the process.

“We really need some [stations] remotely located, up the Lillooet River Valley near the Innergex power station and one up where the Ryan River originates,” Clark said in a follow-up interview on Sept. 8. “When it rains at the head end of the Lillooet [River Valley], we have several hours before that water comes into Pemberton. If we know that it’s raining harder up there than it is [down] here, and our rivers are already high, that’s the data that we really need.”

The lack of data was particularly evident during the November 2016 flood, as the River Forecast Centre projected a peak of 770 cubic metres per second, but the peak surpassed 1,400.

In terms of infrastructure improvements, the PVDD’s current priorities start with bringing the region’s dikes up to a level that provide protection for low-lying, unprotected or inadequately protected areas such as parts of Mount Currie and near the airport.

“It’s like changing the oil that’s in your car. We need to keep the infrastructure that keeps us from the nuisance flooding up to the top standard so that we don’t have a flood from a non-big event,” Clark said. “Until we can secure funding for large-scale projects, then that’s the best expenditure of our money.”

Clark also identified four spots other than dikes that need to be improved. The first is at the Arn Canal, which has aging, leaky infrastructure. Clark expects to hear back by month’s end regarding roughly $900,000 in funding from the Union of B.C. Municipalities’ Community Emergency Preparedness Fund.

Clark also presented to the Pemberton Valley Emergency Management Committee on Sept. 8 regarding several potential projects, including fixing the North Arm Channel berm, which was built quickly after the 2003 flood but is now leaking. The committee, made up of VOP, SLRD and Lil’wat Nation representatives, will go back to their respective municipalities and discuss the project and seek funding if they decide to move forward. The price tag is estimated at $350,000.

The other two projects are fixing beaver and vegetation issues at Grandmother Slough, which Clark has discussed with the Lil’wat Nation, and fixing a leaky gate at Gannon ditch near the intersection of Clover and Fraser roads. If there are no other major events this year, Clark anticipates having budget to replace the Gannon valve.

Other PVDD priorities include lobbying the province for additional funding and work with the Ministry of Transport and Infrastructure to reduce flood risk caused by their infrastructure.

As well, to facilitate future project planning, Clark is consulting with SLRD, VOP and Lil’wat to create a long-term vision.

There are potential pitfalls ahead, however. Across the district, Clark said, access to dikes is a problem as many were originally built by the Prairie Farm Rehabilitation Administration without right-of-way agreements in place, which creates challenges in obtaining provincial funding.

“If you have property that has a dike on it and you don’t have a right-of-way signed with the Dyking District, it really inhibits our ability to service and further upkeep that dike,” he said, noting that the Dyking District lacks such agreements for many area dikes. “It’s a commitment, but if you really believe in the safety of the valley, you might want to really think about that.”

At the end of Clark’s presentation, Mayor Mike Richman said he was pleased to see the VOP and PVDD collaborating on projects so far this year, and feels council is better informed thanks to increased communication.

“I feel like we’re in a new era of working together and I’m really excited,” he said. “We need to work together on all this stuff. Obviously, it impacts all of us and the stronger that relationship, the better.”

“The planned upgrades include installation of remote camera and surface velocity radar systems to test non-contact methods for flow and water level measurement. Staff will also survey the local gauge vertical datum to the new Canadian height reference system to allow Pemberton Creek gauge data to be incorporated into future models for floodplain management,” a department spokesperson wrote in an email.

The Large Scale Particle Image Velocimeter technology has only been installed at nine sites in Canada to this point, the spokesperson added.

“Pemberton was chosen because of its ease of access. It represents a specific type of river—the channel is straight and uniform at the Highway 99 crossing,” the spokesperson wrote. “Also it is close to the National Hydrological Service regional headquarters in Vancouver allowing staff to regularly test and maintain the gauge infrastructure.”