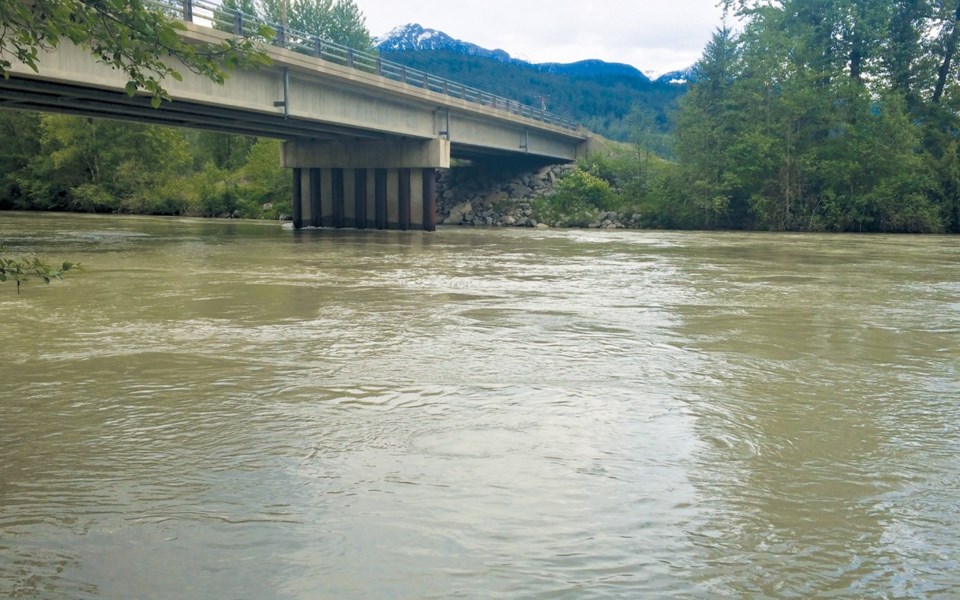 Level up The Village of Pemberton, Squamish-Lillooet Regional District and Lil'wat Nation are seeking to undertake significant flood-mitigation projects. photo by Joel Barde

Pemberton Valley communities are working in coordination to address the threat of flooding in the area, applying to a government grant for several projects they see as critical to mitigating risk.

The parties—the Village of Pemberton (VOP), Squamish-Lillooet Regional District (SLRD), and the Lil'wat Nation—have each applied to the Union of BC Municipalities' Community Emergency Preparedness Fund, which offers grants of up to $750,000 in its flood-mitigation stream.

"We have applied to this funding stream in a mutually supporting approach with Lil'wat Nation and the Village of Pemberton so that we can really maximize what might be possible between the three governments in the Pemberton Valley," said Sarah Morgan, emergency program manager for the SLRD.

If all the funding is granted, the funding could amount to $2.2 million in total, said Morgan.

Flooding risk for the Pemberton Valley has been well documented of late, with recently completed floodplain mapping and landslide risk assessment reports concluding that flood risk for communities is "high," according to a report to the SLRD board on Oct. 23. This includes both flooding of rivers and "consequential outburst flooding from landslide events that are projected to block or suddenly displace rivers and feeder creeks."

The SLRD has applied for $650,000 for sediment removal from the lower reach of the Lillooet River.

Over the coming years, an increasing amount of sediment from the 2010 Mount Meager landslide is expected to flow into this area, rendering the current dyke system insufficient to contain moderate-to-major flood events, according to the report.

The SLRD also applied for a $100,000 grant for landslide monitoring on Mt. Currie.

A large landslide event on that mountain has been assessed as "a low-probability, high-consequence event" with the potential to impact the Green and Lillooet rivers, causing a "sudden wave of displaced water into a 'slash zone,'" states the report. This could result in "a total loss of life in this zone."

The monitoring project would be used to track "precursor signs" of a larger events, such as accelerated loss of permafrost or a sudden increase in smaller rock events, states the report. This knowledge could in turn be used to assess whether an evacuation alert or order is required.

"Currently, there is no monitoring beyond citizen science of the Mt. Currie landslide hazard," said Morgan.

"Without thermal monitoring, we don't know how fast that permafrost is melting, so we don't really understand how fast some of those deforming slopes might come unglued."

In July representatives from all three governments met with experts from the province, the federal government and Simon Fraser University to discuss flooding risks.

The parties met again in September, when they agreed to form the Pemberton Valley Emergency Management Committee (PVEMC),

"Its purpose is to focus on a collaborative and cooperative approach to the multiple hazards in the Pemberton Valley, of which we have some significant ones between Mount Meager, flood hazard, and Mt. Currie, just to name three," said Morgan.

The PVEMC is made up of one elected official, a chief administrator, and an emergency coordinator from each government.

VOP Mayor Mike Richman highlighted the collaborative approach the governments are taking to address the significant geo-hazards in the area.

"We sat down as a group to identify priorities, and said, 'let's divide and conquer now and put out applications for the funding to make these priority projects happen,'" he said. "We want to look at it as a collective, because these sorts of disasters don't respect boundaries."

The Village of Pemberton has applied for a grant, of up to $750,000, to complete culvert upgrades to Miller-Lillooet C Dyke and the Arn Canal Culvert.

Lil'wat Nation confirmed in an email to Pique that it has applied for funding through the grant as well, but did not specify for what projects.

The funding applications have the support of the Pemberton Valley Dyking District (PVDD).

"The PVDD does support the projects that were applied for," said Steve Flynn, operations manager for the PVDD.

"The province is well aware of the flood protection levels we have in the Pemberton Valley and have been very helpful with technical support, funding the flood plain mapping and flood mitigation planning projects, ($600,000 and $300,000) respectively and hopefully soon additional funding for structural mitigation works."

Asked about the chances for success for the application, Morgan said the parties have put forward sound applications.

"We expect the fund to be heavily subscribed to," she said. "I would say that we've had quite a lot of success in the past, and we put together a comprehensive application in terms of the technical aspects."