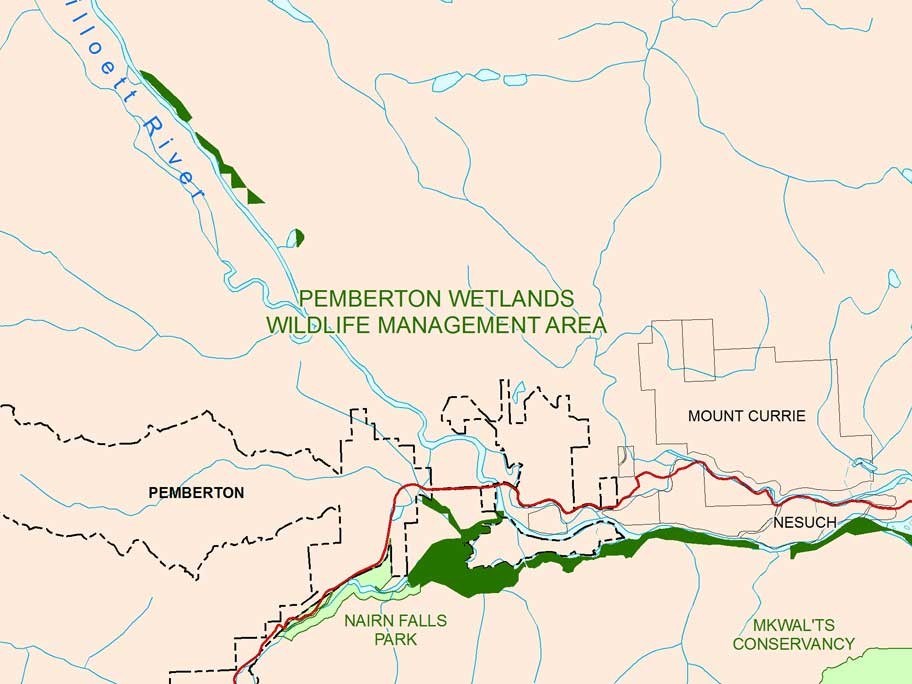 The fish in the Pemberton Wetlands can breathe easier this week after 753 hectares of wetlands around the Upper Lillooet River and Green River were officially designated a wildlife management area (WMA) by the BC government.

The WMA designation is given to conservation lands belonging to the crown requiring a special level of protection and management to support wildlife habitats. Among the species that subsist in the wetlands are fish, waterfowl, songbirds, moose, beaver and otter. The wetlands are also habitat for a number of threatened species including the trumpeter swan and the harlequin duck.

"It's an important step because it protects the wetlands from various forms of development and consequent loss of the ecological values," said Hugh Naylor, retired local fisheries technician and member of the Pemberton Wildlife Association.

"There's (only) a small percentage of the wetlands that once existed in the Pemberton Valley left. There is a great deal of wildlife that relies on these wetlands and riparian areas for their health and herding systems. The wetlands are particularly vulnerable because they are nice flat spaces to build houses on top of and they can also be farmed if they are drained."

It was in the late 1980s when the previous landowner of the Riverlands development applied to convert the strip of wetland within his tenure into agricultural land.

The Ministry of Environment decided the wetlands were too valuable as a wildlife habitat and the application was denied. The ministry decided that it was worth mapping the whole valley to decide which pieces of land were valuable and declare them under a management area. After years of bouncing back and forth between crown land stakeholders and the Ministry, the first draft of the WMA came out in November 1997.

"The final draft came out about 10 years ago and it's basically been sitting in the inbox of the legislative authorities in Victoria," said Naylor.

The new WMA will also affect future planning for these areas in and around Pemberton. Developers and planners who were interested in the area will now have to look elsewhere for future infrastructure projects whether it is for residential, industrial or recreational purposes.

"It's a provincial designation which supersedes any of our municipal designations. It's for the benefit of the environment and the wildlife that lives here," said Mayor of Pemberton Jordan Sturdy.

"Healthy wetlands contribute to the overall health of our lands, water, plants and animals which are integral to the culture and well being of the Lil'wat people," she said.

One of the potential uses for the wetlands is utilizing the old river channels that the original surveyors of the valley (over 100 years ago) preserved for drainage purposes.

These old watercourses could be sites for fish habitat project.

"There is natural gravel placement within these channels so you have a possibility of spawning channel activities," said Naylor.