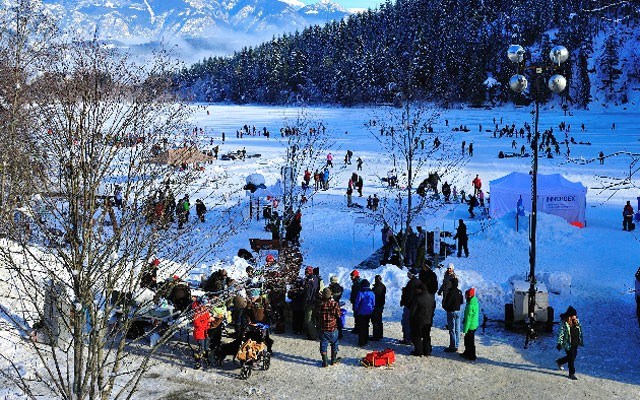 WEATHER WAITING Pemberton Winterfest has been delayed a week due to warm weather. PHOTO BY DAVE STEERS

With warm weather in the forecast for at least the next week, organizers of the Pemberton Winterfest have postponed the event until Friday, Jan. 23.

The hope is that the ice surface on One Mile Lake will be solid enough by then to accommodate all of the planned activities.

"We've been monitoring (the ice) quite closely over the last couple of days, and what we've got happening is we've got a beautiful layer of ice underneath slush and snow," said Carlee Cindric, chair of the festival.

"It's just preventing us from doing all the activities on the lake that we want to do, like the ice fishing and the curling and the shinny hockey and the skating."

After warm weather led to the cancellation of the event last year, Cindric said it was important not to cancel again this year.

"I think the community missed it last year, and I think people are excited for it this year," she said.

If the weather chooses not to cooperate over the next two weeks, a scaled-back version of the festival will still take place.

"We would look at condensing it down to a half-day event, and running all the activities that don't rely on the ice and the lake," Cindric said.

"We'd still look to do the polar bear plunge... and then we would roll into afternoon fun with live DJs, we would show an outdoor movie, we'd probably get a little bit of street hockey going, we would have 'you roast' hot dogs and s'mores, and we would try to do the wish lanterns and the fireworks."

Dakota Pearl is still scheduled to play at the Pemberton Legion on Friday, Jan. 16 at 9 p.m.

Updates on scheduling will be posted to the Pemberton Winterfest Facebook page and on www.pembertonwinterfest.com.

Pemberton Mayor Mike Richman said the festival plays an important role in bringing the community together during the winter.

"Pemberton's got a core population and there are a lot of people that have been here a fair while, but we're always bringing new folks into the community, and stuff like this just helps introduce folks to each other and to the community that we have."

And for the amount of work put in by volunteers to make Winterfest happen, Cindric said organizers are determined to make sure something goes ahead.

"I think that was part of the reason that we decided to postpone to see if we could give it one more go, because everyone has put in a lot of work," she said.