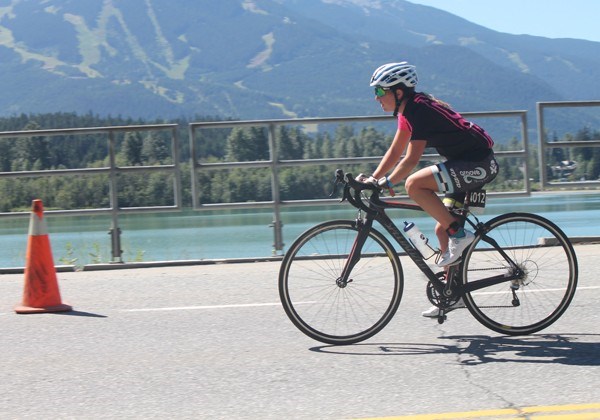 Iron Opposition The Village of Pemberton says it will not support the three-year renewal of Ironman Canada. File photo

Citing overwhelming safety concerns on Pemberton Meadows Road, the Village of Pemberton (VOP) will not support the three-year renewal of Ironman (IM) Canada.

The motion was passed at a special council meeting on Tuesday, June 27, which was called in the wake of some incensed discussion about the event on Facebook in recent days.

A June 24 thread on the Pemberton Community Forum Facebook group featured talk of race-day protests, road blockages and even sabotage via spike strips and nails.

“I have to say that I was disappointed in some of the things I’ve seen on social media,” said Mayor Mike Richman at the meeting.

“I think some of them are quite honestly shameful, and some of the threats in there I think are kind of ridiculous, but I think there has also been a really positive and strong conversation out there and that’s what we’re responding to here today.”

It was standing room only at the meeting, with about 30 people packing into the VOP council chambers to take part in the discussion.

Those who spoke did so overwhelmingly in opposition of the event.

The recurring concerns raised were about safety on the Pemberton Meadows Road, with training cyclists sometimes riding three abreast and showing blatant disregard for local residents and their properties.

Meadows resident Dudley Kennett said he feels its time for upper valley residents to form an organization to represent themselves, and possibly even bring a class-action lawsuit against provincial and local officials.

“I’m not speaking militancy here, but I’m saying it’s time that we spoke up,” Kennett said, adding that most who don’t live on the Meadows Road may not see how the IM athletes training affects residents.

“You should see how many times I get the finger driving the tractor up and down that road trying to get from hayfield to hayfield, (or) the number of people that swear at me when I pass them with my tractor on their bikes,” he said.

“These bikers are competitive, they’re focused on their thing and they’re totally oblivious to the fact that they’re doing this in somebody’s back yard.”

Hurtubise said she trains on the Meadows road and has had trucks veer towards her (driven by people she knows), cans thrown at her and people curse at her, no matter how far over she gets on the shoulder.

It’s gotten to the point where she does 90 per cent of her training in her garage with fans on because she’s scared of what might happen on the road.

“I am sorry for everybody else’s behavior, but I live here, and I sit on the fence and I see both sides of it,” Hurtubise said, fighting back tears.

“I am a passionate IM athlete. I love it. It drives me as a person. It’s my outlet. But what I see happening on social media — the criminal words being used to threaten other people’s lives to make a point — is disturbing.

“How do I explain to my six-year-old and my seven-year-old that that’s what people think, and that’s how people behave to get what they want? How do you do that?”

From a business perspective, the day of the event is almost a complete loss, said Pemberton Chamber of Commerce president Graham Turner.

The other concern is a lack of marketing for the community, he added.

“If you read through the IM website I think you see the word Pemberton once,” he said. “You talk to the athletes and they’re blown away by this valley, so how do you get that message (across), that this is an amazing valley and it’s all part of IM?”

The marketing aspect is something the VOP has made loud and clear to IM organizers, Richman noted.

Mark Mendonca, owner of Grimm’s Gourmet and Deli and president of Tourism Pemberton, said he supports the event even with its downfalls, but worries about the effect it has on his employees.

“It’s absolute world class. I support it no matter what, I really do, even as a business owner who has to close,” he said.

“Maybe I can afford to close, but what I can’t afford to do is have employees that aren’t paid, because for those employees, every day counts… maybe more emphasis could be put on the actual employees, the people that do suffer from the event.”

“From a tourism perspective, we need to see it grow, because I would venture a guess that two thirds of our community live off of tourism to some degree,” he said.

Perhaps the answer for the concerns on Pemberton Meadows Road is an increased police presence, he added.

“If the point could be made by officers writing tickets and people seeing that in the media — tickets are being handed out — I think everybody is going to start to respect the laws,” he said.

In an emailed statement the day of the IM meeting spokesman Keats McGonigal said: “Ironman respects the process taken by the Village of Pemberton. We look forward to continued dialogue on the issues with all our partners including the Pemberton council.”

A survey of 369 residents of Pemberton, the Squamish-Lillooet Regional District, Lil’wat Nation and Pemberton Meadows released last month found that roughly 75 per cent of respondents saw no value in hosting the event, and nearly 80 per cent would not support its return beyond 2017 without changes.

On Wednesday, the Resort Municipality of Whistler (RMOW) responded to the decision in an email, highlighting the $8.4 million the event provides to the regional economy and the 7,500 visitors it attracts on average each year.

“The RMOW is in negotiations with Ironman on the renewal of the event beyond 2017,” a spokesperson wrote, adding that the RMOW has proposed a working group to address community concerns.

“Marketing opportunities to promote the VOP as a tourist destination are in development including both print and digital channels, supported by a strong event Traffic Management Plan which is overseen by the Ministry of Transportation and Infrastructure. The working group will actively engage the agencies responsible for road safety, the RCMP and Ministry of Transportation and Infrastructure, which is an important aspect of the event.” n