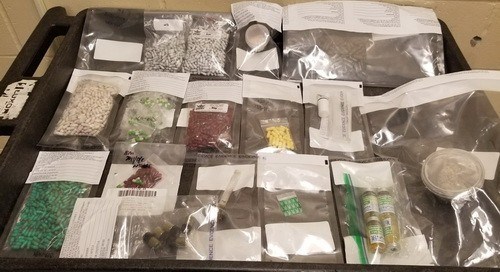 Medical marijuana products that were recovered from a Squamish home following the robbery of a Second Avenue pot dispensary this month. Photo courtesy of the Squamish RCMP

Police have arrested two individuals wanted in the armed robbery of a Squamish medical marijuana dispensary earlier this month.

On Dec. 1, the 99 North Medical Cannabis Dispensary on Second Avenue was held up in broad daylight in what police called "a brazen" robbery. Using a replica black pistol, the two male suspects made out with the contents of the shop's safe before fleeing the scene in a Ford F150 truck, police said.

Investigators later determined the robbery was linked to an armed home invasion that took place on Nov. 24 and led to the assault of one of the house's occupants.

Turns out the home where the invasion took place was the subject of an earlier drug warrant that was executed on Oct. 5.

That led police to a man and a woman believed to be linked to these two prior incidents. They were arrested in Squamish on Dec. 10. Along with a replica pistol, officers seized some stolen property, cash, and medical marijuana products.

Another male suspect is still at large, police said.

"This investigation came together through the collaboration and support of engaged citizens and investigative work by our officers," said Sgt. Jeff Shore of the Squamish RCMP in a release. "The nature of these offences are concerning and required a strong response. In this instance, the police and community came together to prevent further acts of violence and it also resulted in the recovery of stolen property."