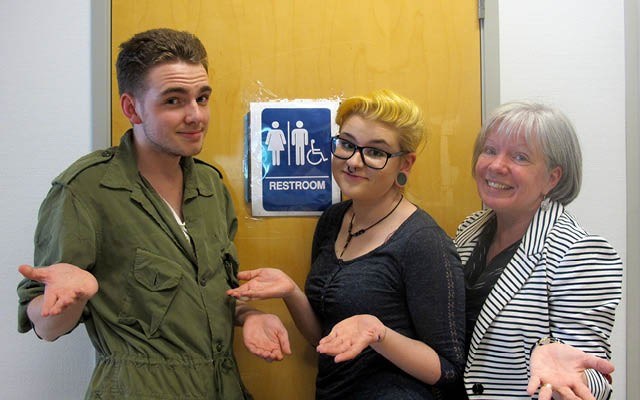 A Sea to Sky school district policy passed last year is quietly making life easier for a segment of the school population traditionally singled out, abused and discriminated against.

The school district implemented a sexual orientation and gender identification policy to protect lesbian, gay, bisexual and transgender (LGBT) students and staff from harassment. The Vancouver School Board is currently working toward implementing a similar policy.

For Howe Sound Secondary School Grade 11 student David Thompson the policy has made his life far more tolerable than it was before he arrived for Grade 10.

"When I was in elementary school, I had a very horrific time growing up gay," he said during an interview in the office of HSSS principal Dr. Christine Perkins. "I was abused physically and mentally by my peers and it was terrifying."

Thompson knew by Grade 7 that he was gay. He was open about it from the time he understood his sexual orientation.

"I was the only person that I knew in town at that moment who was gay," he said.

When Thompson started school at HSSS he discovered the school's Diversity Club and in the club he found tolerant people who accepted him exactly as he was. He found other people like him and a safe place where he could be himself.

Sarah Friestadt is one of Thompson's fellow club members. She said the club meets once a week at lunchtime and it attracts between 15 and 20 people who like to discuss issues that are rarely discussed.

"It's a place where all these people can come together and hear different people's points of views and perspectives on what's going on in our society and the world," said Friestadt.

"We talk a lot about politics and stuff that's happening."

Taboo topics tackled by the club include mental health and gay rights.

"I'm just really passionate about social injustice," said Friestadt. "I like to be involved and try to make change."

Tolerance is the focus of the Sea to Sky school district's sexual orientation policy, which was endorsed by the Board of Trustees last year after the draft policy went through a consultation process.

According to Perkins, the policy is designed to promote tolerance and generate an atmosphere of safety and respect at all the schools in the district.

"It lets them know that if, for example, David was being bullied like he was many years ago, we would be there to support him and stop it 100 per cent," said Perkins.

"It allows us to speak openly about being gay and understanding that everyone is accepted for exactly the way they walk through the door," she said.

Most students aren't aware of the policy, said Perkins, but all the students understand that being different is accepted at HSSS.

"When they walk in they see the pride flag flying and they hear us say that it's OK to be gay and straight at our schools and they know that we have transgender bathrooms," Perkins said.

Thompson, who uses the male washroom, said he doesn't understand the drama over which room people go to when nature calls.

"I don't think that if you're peeing you're sexually on the prowl," said Thompson.

He said he would feel comfortable in any washroom.

"It's exciting to see that there's a conversation," said Thompson of the debate in Vancouver over the washrooms in Vancouver schools.

Perkins is keen to see the conversation spread throughout the Sea to Sky school district. She would like to see diversity clubs at every school in School District 48.

"It gives students a safe space to talk," Perkins said.