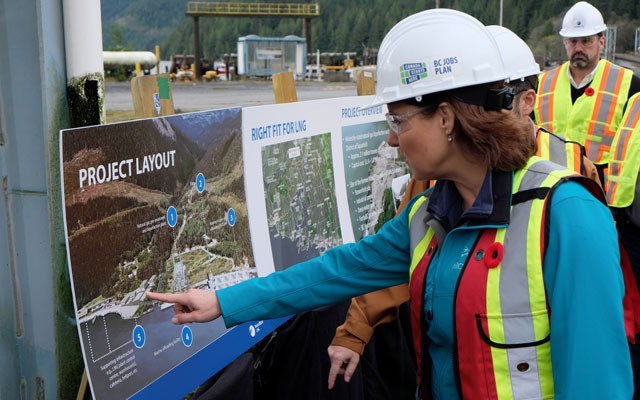 Project plan Premier Christy Clark examines the layout for the Woodfibre LNG plant in Squamish after announcing the project would go ahead. PHOTO courtesy of <a href="http://gov.bc.ca">gov.bc.ca</a>

Premier Christy Clark announced on Friday, Nov. 4, that the Woodfibre LNG/Fortis BC project is going ahead.

"We're delighted to say today that LNG in British Columbia is finally becoming a reality," Clark said at the Woodfibre site in Squamish. "It's a $1.6-billion investment decision."

Clark was onhand with Minister of Natural Gas Development Rich Coleman as Woodfibre LNG executives announced project approval from the board of directors. Construction is expected to begin in late 2017 with liquified natural gas (LNG) shipments to begin in 2020.

Squamish Nation leadership was absent as Chief Ian Campbell did not attend.

"Put simply, our Woodfibre LNG work simply isn't finished, it's too early to celebrate," said Campbell in a statement emailed shortly after the announcement. "Under the Squamish Process — our legally binding, independent Environmental Assessment — we set out 25 conditions that must be met before we sign anything. We are still working on them."

Campbell went on to say: "Amidst a growing trend to eliminate fossil fuel subsidies, B.C. is moving in the opposite direction. The subsidized electricity rate for the project fits a pattern of reduced tax rates, incentive programs, and other deals for the LNG industry."

Squamish Nation leadership would have preferred that government wait before making the announcement, said Campbell.

Squamish Mayor Patricia Heintzman, who was onhand for the announcement, said she found out about the event through the media, and that it seemed "a little disrespectful" that the Nation's process had been preempted.

"That is obviously concerning," she said. "Squamish Nation has set conditions and there is every expectation that they will be met and until such time — people have jumped the gun a bit."

The announcement drew criticism from the associate director at the Pembina Institute, Matt Horne.

"(The) announcement puts B.C. one step closer to realizing an LNG industry that would undermine the province's ability to do its fair share in the fight against climate change," Horne said. If built, the Woodfibre LNG project will represent six per cent of B.C.'s legislated 2050 emissions target, making the target challenging to achieve.

The announcement came a day after an early-morning arson attack at the Squamish community office of Woodfibre.

The fire had been contained to the front of the building and was quickly extinguished.

Squamish RCMP said in a police report that video surveillance of the incident was obtained and the suspect is between five feet-nine inches and six feet-one inch and about 81 kg (180 lb.), wearing a dark rain coat, jeans and dark boots.

Woodfibre LNG Limited Community Relations Manager John French said in a statement that the community office would remain closed while repairs are undertaken.

— With files from Squamish Chief