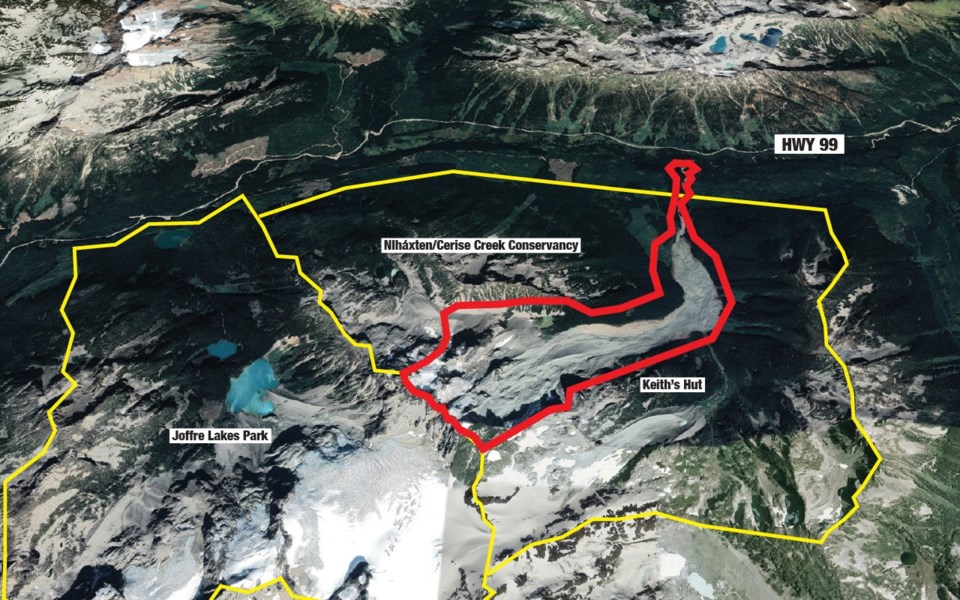 Closure BC Parks recently announced that it has opened a portion of the Nlháxten/Cerise Creek Conservancy for recreational use. The area that remains closed is outlined in red. image supplied

Experienced backcountry skiers will be delighted to hear that the province has decided to open a vast swath of a popular touring destination. But experts warn that the remaining routes to the area's only hut are sketchy and require skill, training and knowledge.

BC Parks closed the Nlháxten/Cerise Creek Conservancy in May after two landslides from Joffre Peak heavily impacted the Cerise Creek watershed within the Conservancy.

The province, in coordination with the Lil'wat Nation, has decided to amend the closure after advocacy from the backcountry-skiing community.

BC Parks recently announced that while the area surrounding the slide path will remain closed, the rest of the conservancy—including the land that the Keith Flavelle Hut (Keith's Hut) sits on—is now open to the public.

The closed area is outlined in red on a map posted on the Nlháxten/Cerise Creek Conservancy website and seen above.

In a statement to Pique, BC Parks warned of the dangers of the alternate access routes to the hut.

"Any alternate routes cross through complex avalanche terrain...We very strongly recommend a high level of avalanche training; equipment and experience is mandatory," reads the statement. "This is not beginner-friendly terrain."

Outdoor advocate Steve Jones noted that the closed area bisects the Cerise Creek Trail, the main route to the cabin. While there are a few different options to access the hut, none of them are beginner friendly, he said.

"[It] remains to be seen what the best route is going to be," said Jones.

It may be possible to go through Joffre Lakes Provincial Park, and then down [Anniversary Glacier], but that's a very advanced route that requires glacier travel and mountaineering.

There's a lot of avalanche danger [and] a particularly active slide path involved in that route."

The other possible routes also have their respective dangers, said Jones. "It's not going to be very practical for a lot of people to get there."

Jones helped lead the effort to get BC Parks to reconsider the full closure of the conservancy.

He said it's important for the public to abide by the closure that's in place, noting that BC Parks has been "kind enough to respond to the public feedback."

BC Parks, he said, takes the expert advice of geologists in making its decisions.

"I think they've done the community a favour, and I just hope that people appreciate that and respect the closure," said Jones.

BC Parks has put up signage indicating the closed area at the trailheads of the conservancy.

The slide wiped out forested land, making it obvious where the closure is added Jones.

Avalanche and navigational training are essential, he said.

"Although [Keith's Hut] remains open ... there is no route to it this year that's going to be as safe as previous years," added Jones. "Every single alternative introduces significant danger."

BC Parks is currently working in coordination with the Lil'wat Nation on the management of the conservancy, following the recent completion of the Nlháxten /Cerise Creek Conservancy Management Plan.