BC Parks to assess whether section of Nlháxten/Cerise Creek Conservancy can open this winter
Oct 21, 2019 12:00 AM By: Joel Barde 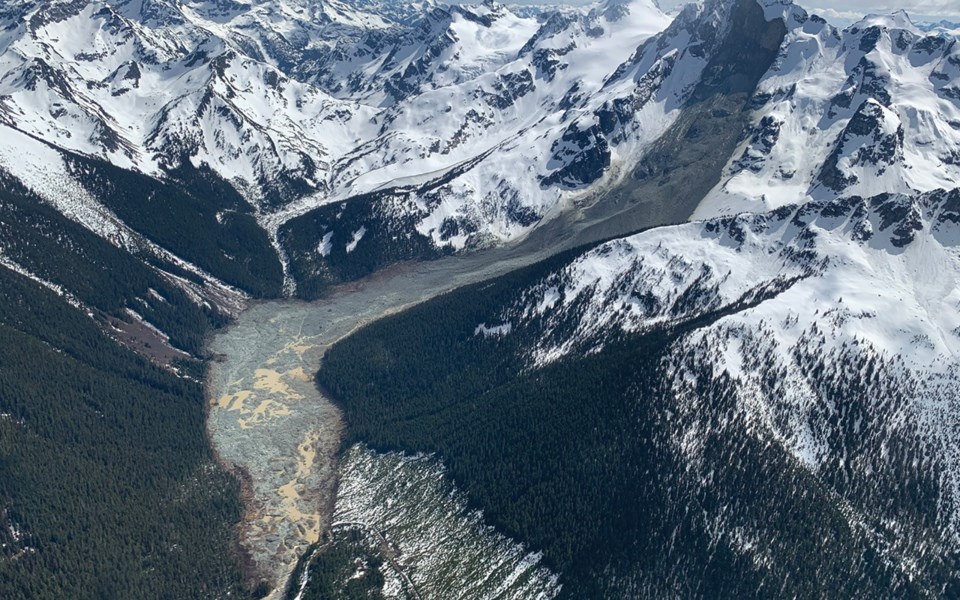 In May, a pair of massive landslides decimated the northeast slope of Joffre Peak, resulting in the closure of the Nlháxten/Cerise Creek Conservancy, located north of Pemberton. Photo by Wilfried Braun

The backcountry skiing community has lost access to an important recreational area for at least this winter—though there is still hope that skiers will be able to access at least part of the Nlháxten/Cerise Creek Conservancy.

BC Parks recently shared that the conservancy will remain closed for the winter following a geological assessment of the area.

The agency is currently working in coordination with the Lil'wat Nation on the management of the conservancy, following the recent completion of the Nlháxten / Cerise Creek Conservancy Management Plan.

As previously reported ("BC Parks investigating second Joffre landslide," May 17, 2019) the area was closed in May following two landslides.

In a statement, BC Parks said that a geotechnical assessment of the area has taken place and "a follow-up" assessment is being recommended for the spring.

The agency is looking at potentially opening up a section of the area to the public—if it is deemed to be safe to do so according to its studies.

"After receipt of public requests to open a section of the conservancy that was not affected by the slides, BC Parks is undertaking an assessment of this option and will determine the feasibility this fall," said the BC Parks statement.

Jayson Faulkner, president of the Spearhead Huts Society, said that the Cerise Creek Conservancy is a "very important" backcountry destination, especially when conditions get hazardous in other more challenging places.

He welcomes the province's decision.

"You're in the trees, and the terrain is not steep or really complex to get into," said Faulkner. "It's really big, dramatic terrain that you have instant access to."

The conservancy is also home to Keith's hut, one of few legal huts in the area. (BC Parks did not indicate that it is looking to permit access to the hut, but said that it is working with the hut's caretakers to ensure the facility is properly maintained in the winter.)

The loss of Keith's hut for the winter will have a wider impact on the region's backcountry huts system, said Faulkner.

"There is very limited motorized access infrastructure for overnight accommodation in the mountains in the corridor," he said in explaining the hut's importance to backcountry enthusiasts.

Steve Jones, an outdoor recreation advocate who has publicly called for the province to consider adjusting the boundary of the closure so that Chief Pascal and part of Joffre Shoulder can remain open to skiing, also applauded the province's decision.

"I'm thankful that the province is being responsive to public feedback and will be assessing the feasibility of adjusting the boundary of the closure area," said Jones, in an email.

"Ideally, the popular area in the north-west corner of the conservancy would be safe enough to remain open."

Jones also raised concerns about Keith's hut, noting that it will still need donations to cover the cost of maintenance, as it will not benefit from nightly fees this winter.

Scott Flavelle, director of the society, was not available for a phone interview, as he was in Nepal, but in a statement said, "I can understand that the landslide area remains high risk and closes the traditional access, but am surprised that the Hut cannot be accessed from other approaches."

To donate to the society, visit: www.canadahelps.org/en/charities/keith-flavelle-memorial-hut-society/.

*Editor's note: This story has been updated to reflect the joint management of the area in question.