The provincial government is in the process of setting aside a large land preserve adjacent to the recently established Nlhaxten/Cerise Creek Conservancy thanks to advocacy from the Lil'wat Nation.
Jun 30, 2019 12:00 AM By: Joel Barde 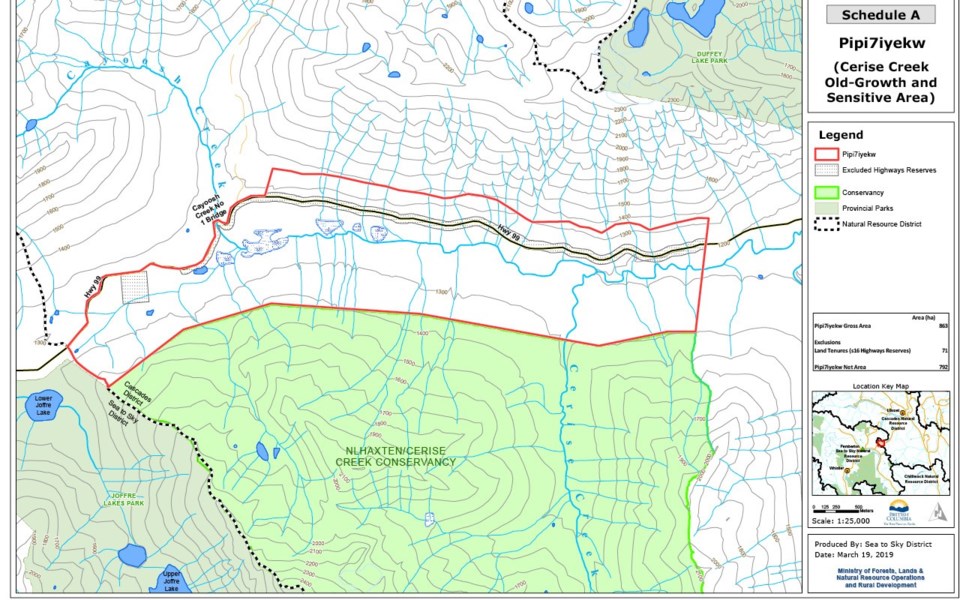 The proposed 864-hectare area that the province is considering protecting is shown here, bordered by the red lines. image submitted

The provincial government is in the process of setting aside a large land preserve adjacent to the recently established Nlhaxten/Cerise Creek Conservancy thanks to advocacy from the Lil'wat Nation.

The area—which totals 864 hectares and is located in the shared territory of the Lil'wat and St'at'imc Nations—is used to gather plants for food and medicine, according to Harriet VanWart, director of lands and resources for the Lil'wat Nation.

Locally, it's referred to as "Morgan's Garden," in honour of a Lil'wat Nation man who was known for his impressive knowledge of plant life. "It's a place he would go ... He knew of so many different varieties of plants and what you could do with them," said VanMart.

The push to protect the area—which will be referred to by its traditional Ucwalmícwts name, Pipi7iyekw—was made after community consultation about the Nlhaxten/Cerise Creek Conservancy.

About two years ago, community members looked at the map of what was being protected and realized that it left a bit of "a gap" because it does not protect Morgan's Garden, said VanWart. "People were sort of questioning, 'Why doesn't the conservancy go down to cover ... right down to the Duffey (Lake) Highway?'"

The deal, which will safeguard the area from logging by any party, including the Lil'wat Nation, was made possible thanks to the Sea-to-Sky Land and Resource Management Plan signed by the province and Lil'wat Nation in 2008.

It established seven new conservancies in Lil'wat territory and included a provision for the Lil'wat Nation to identify 2,000 hectares of "old-growth forest and sensitive areas" within its territory for protection.

To date, 1,074 hectares of the 2,000-hectare amount have been spent, meaning this new deal will exhaust the budget.

"I know the province is interested in looking at land-use planning again in B.C.," said VanWart. "So perhaps moving forward further allocations like this will occur—or further protected areas will occur."

The area is also increasingly popular for recreation, and will remain open to all for this purpose, though there appears to be some concern about its impact.

"There is a concern with the increasing amount of people recreating in the territory and the kind of impacts that's having. That comes up a lot when we are having our community meetings," she said.

"It's kind of been this funny missing piece of the puzzle in this otherwise contiguous piece of land that is used quite extensively for recreation, and is really quite beautiful, and has a lot of natural value and ecosystem value as well," said Jones. "And obviously, in this case it's not necessarily being protected for recreational values—but for First Nation's values. And I think that's great."

The province is currently taking feedback on the proposal; Jones said he is going to support it—but with one important caveat.

Public feedback can be directed to Frank DeGagne, a land and resource specialist with the province, at frank.degagne@gov.bc.ca.