Majority of respondents to BC Parks survey say day-use fees and caps on visitation appropriate
Oct 20, 2019 12:00 AM By: Joel Barde 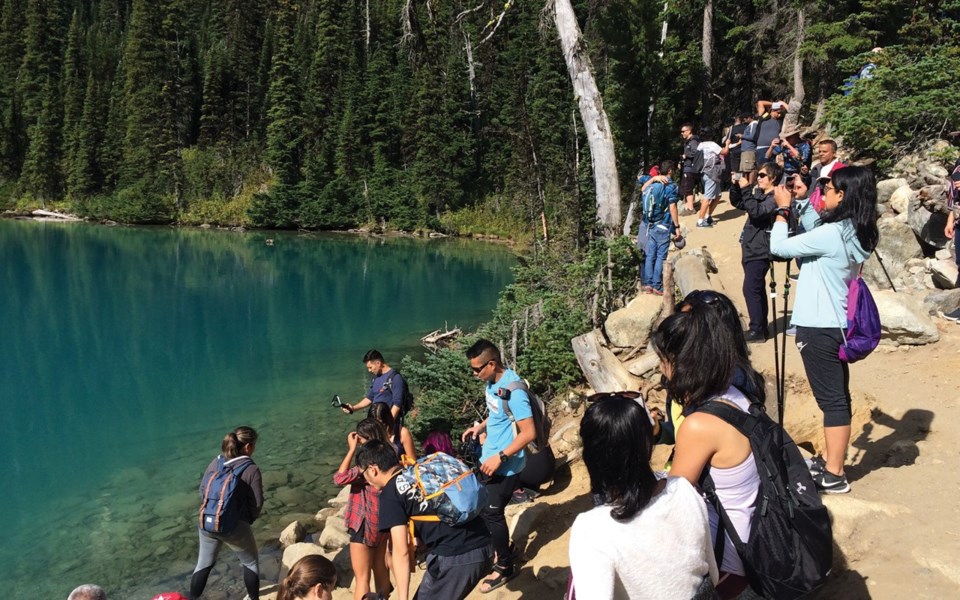 A recent BC Parks survey found that overcrowding is resulting in a negative visitor experience to Joffre Lakes Provincial Park for many. PHOTO BY JOEL BARDE

The results are in—and it turns out that the majority of respondents to the Joffre Lakes Provincial Park Survey are supportive of day-use fees and a cap on the number of daily visitors.

BC Parks ran the online survey in April, garnering just over 2,500 respondents, with the majority between the ages of 25 and 34 and hailing from the Lower Mainland.

Just over 70 per cent of respondents said they would be willing to pay a day-use fee to enter the park if they knew that the money was being reinvested into the park.

And 84 per cent of respondents said they would agree with "limiting the number of day visitors in the park" if it meant they were "guaranteed easier access."

That, perhaps, may have to do with a general dissatisfaction with the visitor experience: 75 per cent of respondents said that the number of people in the park had "a negative" impact on their visit.

The survey is part of a comprehensive effort by the province and its First Nations partners to address a host of issues associated with the popularity of the park, which features spectacular views of three pristine alpine lakes and a relatively easy hike.

It will inform a forthcoming visitor-use management strategy set to be released in 2020. The province is working on the strategy in coordination with Lil’wat and N’Quatqua First Nations, as the park is located in unceded shared territory of the nations.

The province, however, has already implemented measures to improve the user experience and address issues related to high visitation numbers on busy days

These measures include expanding the available parking and implementing a shuttle-bus system for visitors.

In the past, visitors have illegally parked on the shoulder of Highway 99 (Duffey Lake Highway) when no parking was available, causing a dangerous situation for pedestrians and drivers alike.

West-Vancouver-Sea to Sky MLA Jordan Sturdy said the measures have resulted in dramatic improvements to safety this summer.

"I don't think we saw the same situation this summer as we saw in previous summers," said Sturdy, adding that he didn't see or hear of people illegally parking on the shoulder this summer.

He also had concerns about the idea of a user fee saying it doesn't make sense for the province to "isolate" Joffre Lakes Park with this type of system.

"I don't think that you can isolate Joffre, and just look at Joffre ... I think you need solutions that work across the province."

Sturdy added that he is in favour of concentrating recreational use.

"I am a fan of concentrating impacts as opposed to dispersing them, and that's what my concern would be, that we just end up pushing people to other places," he said.

Sturdy added that he would like to see improved consultation with stakeholers, including the Village of Pemberton, during the development of the visitor-use management strategy.

"The consultation that was done originally was terrible. And maybe this online survey will provide a little more information, but where is the meeting with the local tourism operator?"

Tori Ball, a terrestrial campaigner with the Canadian Parks and Wilderness Society, BC Chapter (CPAWS-BC), also voiced opposition to the prospect of user fees.

"We think it's important to keep the BC Parks system accessible to all," she said.

Even minimal fees, in the $5 to $10 range, would be problematic, said Ball.

"It might be a small amount to some, but it would definitely be a deterrent for people," she said adding that any cap on visitation should be seen as a tool of last resort.

"We'd much prefer them to invest in good trails and infrastructure in other places, and promote places that can handle more traffic."

In a statement to Pique, BC Parks said it is in the process of compliling the results of its "in-park surveys" and will be consulting with stakeholders alongside its First Nations partners this fall as it develops its long-term visitor use management strategy for 2020.

"We were impressed by the level of response received by the public," it stated.

"We appreciate that many people are passionate about the park and we are pleased they took the time to provide their input."

*Editor's note: This story has been edited to clarify the involvement of Lil'wat and N'Quatqua First Nations in the development of the Joffre Lakes Provincial Park visitor-use management strategy.