Recycling in the Sea to Sky is a good news, bad news story

Backlog of product at GFL is a symptom of a complex 'perfect storm,' in the world of reducing, reusing and recycling: sales manager
Jul 22, 2019 9:17 AM By: Jennifer Thuncher/ Squamish Chief 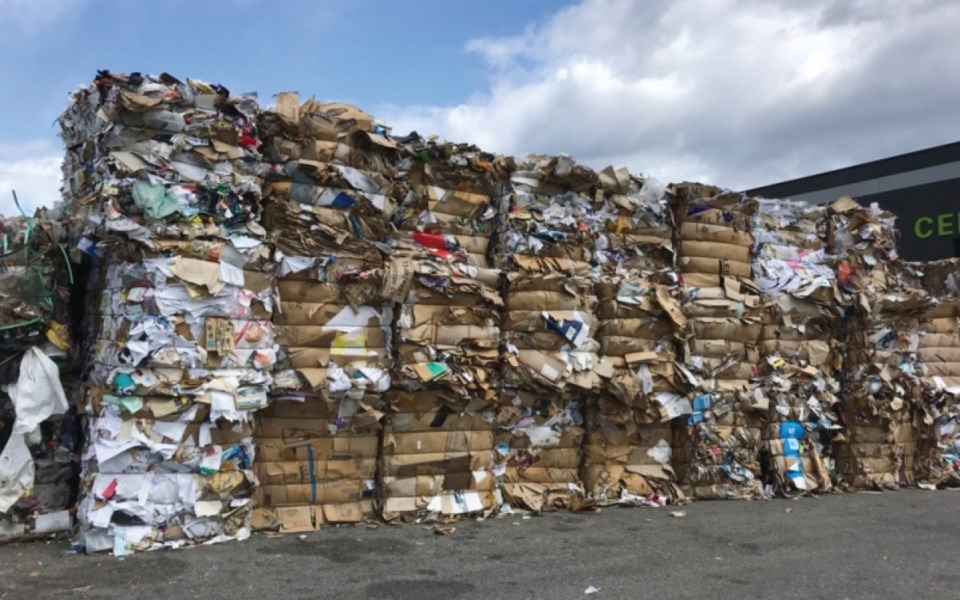 The tower of recycling last week at GFL when young Mya Hartnells visited the depot. She sent the photo to The Squamish Chief. Photo: MYA HARTNELL

Bales of recycled goods tower above visitors' heads and stretch on for the length of a large house, or more.

For those wondering what's happening at the Green For Life Environmental - formerly Carney's - recycling depot, here are some answers.

Denise Imbeau, sales manager at GFL told The Chief the issue is complex and dynamic.

"It is a bit of a perfect storm, frankly," she said, of the current backlog.

The first thing to know is that the Squamish GFL depot takes in residential recycling from the whole Sea to Sky Corridor, not just Squamish.

Secondly, a couple of acute factors lead to the build-up.

The District says there was a fire at a Recycle BC processing facility, which prevented GFL from delivering loads until cleanup of the fire was complete, which took about three weeks, resulting in a build-up of loads.

"We understand that the loads are now moving again, so presumably any backlog would dissipate in a reasonable timeframe," said District communications manager Christina Moore.

GLF confirmed that loads are moving again, but the backlog will take time to clear as more product keeps coming in as loads go out.

Adding to the backlog is the fact that off-shore markets are accepting less material than previously, which has a trickle-down effect.

Other than with plastics - that often go to a B.C. company called Merlin Plastics, which turns the material into pellets used by the plastic industry to make goods - most other products are shipped outside Canada to be processed.

"Slowly, but surely all of those destinations - India, China, Korea - they are slowly closing the door to what they want to take from North America," she said.

"B.C. probably has the best reputation of all of North America... because of Recycle BC... they have forced all of the players, including ourselves, to be held to a really high standard," Imbeau said, adding GFL has to keep the contamination rate to less than three per cent.

Residential recyclables are funneled through Recycle BC from GFL.

"Most of what we get is governed by Recycle BC, so that is a flowthrough," Imbeau said. "It comes and then it goes."

The remainder of the product is what GFL picks up from commercial businesses.

Every product has its own market.

"It used to be that cardboard brought in enough money that it would pay for itself and most of the other products," Imbeau said. "Right now, cardboard is paying about $35 a metric tonne. What it costs me is $40 a tonne to bale it, and ship it. So right now I am losing money on cardboard and cardboard pays for the rest of the stuff."

In other words, cardboard sales can no longer subsidize processing other recycled goods.

"We are not in an all-out panic or anything yet," Imbeau said. "Right now we are just biding our time and waiting to see."

Adding to the acute issues are the longer-term changes in household habits in Squamish. The volume of recycling that GFL receives has increased.

The good news is more is being diverted to recycling, especially given that our landfill is going through an expansion due to the amount of waste it receives.

"If we had gone back a decade, all of that would have just gone directly into the landfill," she said. "It is a good news story that we are recycling that much."

"When I make my buying decision in the first place, am I thinking about the packaging that is coming with it?" she said. "Then once I have it, am I doing the responsible thing with it. Am I sorting it accordingly?"

"We are getting just huge volumes. People are doing lots of mail order, so tons of cardboard, tons of Styrofoam - we literally can't keep up with the Styrofoam," she said.

She said residents get frustrated at times that bins are overflowing at GFL, but often staff will dump the bin and immediately it will be filled again.

"In some ways, it is a super good news story in that it is not going into the landfill, on the other side, people are just generating so much waste, and a lot more than we have before," she said.

One complicating factor is that some local businesses use the depot, though it is meant for residential waste.

"Right now, there's tons of businesses that just pull up, full up with a van, every day just full of Styrofoam, or cardboard or whatever and they dump it in there and now the residents are annoyed because it is full," she said. "Now we have their waste and we have to haul it for that business - we are subsidizing all the other businesses in Squamish," she said, hinting that aspect might be one thing that could change in the future.

Commercial drops may eventually be turned away, Imbeau said. "What they need to do is get a bin for whatever product it is they are producing and they need to pay accordingly, whatever the appropriate tipping fee is."

Another thing that is a longer-term option is a commodity charge for recycling, as there is for landfill fees for garbage, she said.

Recycle BC has a lot of information on recycling at recyclebc.ca.

Percentage of residents claiming to recycle - 99.

Percentage of residents that recycle - 73.

The District of Squamish and the Squamish-Lillooet Regional District joined Recycle BC in 2018.

Germany, Austria, South Korea and Wales are global recycling leaders. They recycle between 52 per cent and 56 per cent of their municipal waste, according to the World Economic Forum.