Canadian comedian drives a train and plans to test his halfpipe skills
Jan 19, 2014 8:00 AM By: John French 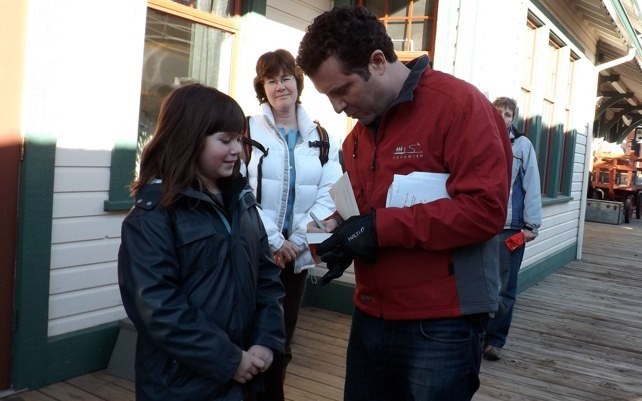 FAN FAVOURITE Rick Mercer signs an autograph for Sonoma Brawley at the West Coast Railway Heritage Park while the comedian was in the Sea to Sky corridor filming for an upcoming episode of the Rick Mercer Report. Photo by John French

Fans of the Rick Mercer Report are going to see some familiar scenery in at least one upcoming episode of Mercer’s TV show. Squamish residents watched him at the West Coast Railway Heritage Park today (Jan. 19) as the comic filmed segments for an upcoming program to air on the Canadian Broadcasting Corporation.

Following his one-day stint in Squamish, Mercer was headed to Whistler to do more filming.

His tour of the West Coast Railway Heritage Park in Squamish included a train ride on one of the heritage locomotives at the park. Mercer was at the controls of the train.

“I was in charge of the horn,” says Mercer during a lunch break. “That was one of my duties here today. They told me there’s very strict protocol around when the horn should and should not be blown and then I stopped listening because I didn’t want to know because I wouldn’t want to intentionally break the rules — I couldn’t hear the rules because the horn was blowing.”

With the train loaded full of Mercer’s fans he actually operated the train, shunting it forward and back.

Gord Bell, the chief operating officer at the heritage park, said getting Mercer and his crew to come to Squamish was two years in the making.

“We got the call on Monday that they were coming on Sunday so short notice,” says Bell.

Despite the short notice Bell says the heritage park is happy it will get the national exposure Mercer delivers.

“For the park we could never, ever buy exposure like this,” Bell says.

Mercer plans to visit the alpine tomorrow (Jan. 20) while he’s in Whistler.

The Rick Mercer Report airs on Tuesdays at 8 p.m. He’s known for his comedic rants and his book called A Nation Worth Ranting About is a Canadian bestseller.