Ridesharing a good option, but no 'panacea,' says local MLA 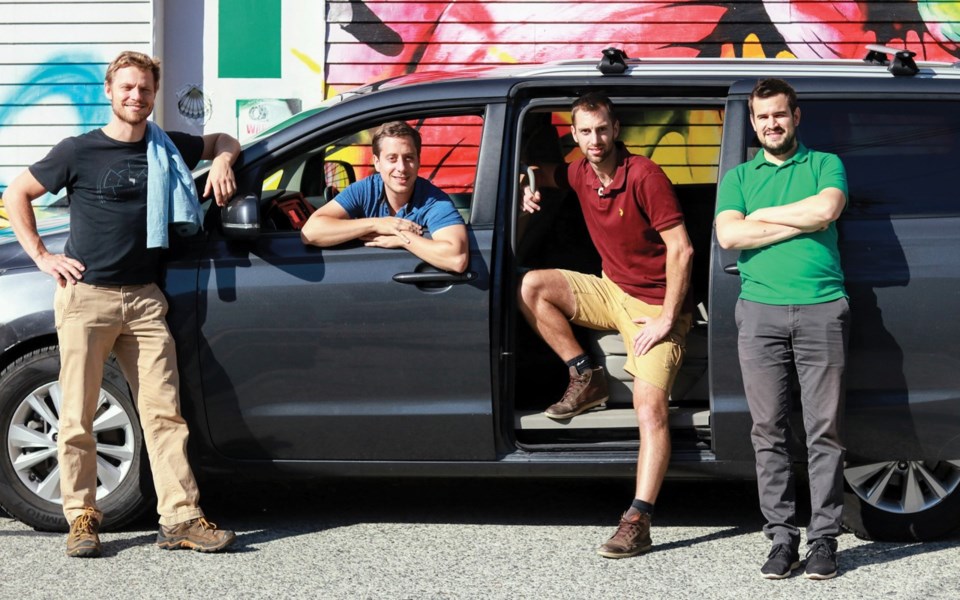 In light of cutbacks to Greyhound service, a Vancouver-based carpooling app is calling on the province's MLAs and mayors to encourage their constituents to hitch a ride.

"Our job is to educate municipalities that there are options to solve the problem, which don't need funding from the province or from transit agencies to get buses on the road," said Poparide CEO Flo Devellennes. "We think we can compliment bus services in certain places."

Poparide—which bills itself as an Airbnb for sharing rides—links up passengers and drivers through its online platform. Passengers can report problems, and profiles are linked to social media accounts and phone numbers.

Unlike Uber or Lyft, Poparide drivers do not turn a profit but receive a financial contribution towards their gas, insurance and maintenance costs for getting from Point A to Point B. The service is therefore legal under the province's Passenger Transportation Act, which allows for payment for carpooling services so long as the drivers and passengers have a common origin or destination and the driver is not compensated for more than the operating costs of their vehicles on that trip.

According to Devellennes, Poparide has caught on in the last year in the Sea to Sky.

"The word of mouth has really kicked in," said Devellennes.

In November, Greyhound cut its service frequency between Pemberton and Whistler, leaving Pemberton without a late-night transit option.

And at the end of February, the Passenger Transportation Board (PTB) ruled that the company could make sweeping cuts to its routes if it sees fit and cease the operation of seven routes, including all runs connecting communities in northern B.C.

The decision—which also gives Greyhound the discretion to cut service between Whistler and Pemberton to just two trips in both directions per week, and service to Mount Currie altogether—has been decried by both Pemberton and Whistler's mayors.

Since the announcement, Poparide has been actively reaching out to municipal leaders and MLAs in areas that have been affected by the Greyhound cuts.

"We need to do more work in the Pemberton area. It's not been our focus in the last couple of years," said Devellenes, later adding that in 2017, 100 trips were offered along the Whistler-Pemberton corridor.

Local MLA Jordan Sturdy, who is serving as the BC Liberals' transportation critic, sees value in the service the company is offering, but only up to a point.

"There is a role for it—but I don't see it as the panacea," he said.

As Poparide develops, it will have to ensure that it is conforming to high safety standards, he said, noting that one of the strengths of the ride-hailing proposal (from Uber and Lyft) are that vehicles would be regularly inspected.

"Poparide will never take the place of a regional transportation system—there's not a chance," he said.

As Pique first reported in November, BC Transit has proposed to add two daily trips between Whistler and Pemberton to its existing services—but those aren't expected to be in place until 2019, after a governance and funding model is cemented with provincial and regional governments. Village of Pemberton Mayor Mike Richman has indicated that the funding model that's currently on the table is untenable.

For Whistler Mayor Nancy Wilhelm-Morden, carpooling is an excellent option for Sea to Sky residents, as it reduces congestion, frees up parking and reduces greenhouse gases.

She said that the municipality sells carpool passes for Lots 4 and 5, which allow up to four license plates to be on the same pass.

Unfamiliar with Poparide, Wilhelm-Morden hoped for more clarity on ridesharing from the province.

"If it does fall into the carpooling legislation, then that's great ... but I think I'd want the province to comment on it, she said.

Wilhelm-Morden also raised concerns about the fact that Poparide does not require background checks for its drivers or vehicle inspections.

With carpooling, a person often knows who they are riding with, the driver's driving history and the state their vehicle is in, she said. "To take that a step further and carpool with someone you don't know, who isn't regulated by the province, it could pose a risk," she said.

The safety concerns are something that Greyhound has also brought up about Poparide and other carpooling platforms.

In media interviews, and its application to the PTB, Greyhound blamed ridesharing companies and expanded public transportation options for its decline—since 2010, Greyhound has seen a 46-per-cent loss in ridership in B.C.

In a September interview with Pique, Peter Hamel, VP for Greyhound's Western Canada region, noted the tremendous disruption caused by ridesharing platforms, which are not bound by stringent safety or scheduling requirements.

But according to Devellennes—who has noted that Poparide is a registered company that pays corporate taxes—Greyhound needs to take a hard look in the mirror before it starts pointing the finger. "A lot of people simply don't want to get on a Greyhound, because the experience of getting on a Greyhound isn't great," he said.

"The reason for them leaving these corridors has nothing to do with us ... we're not trying to take away business from Greyhound."