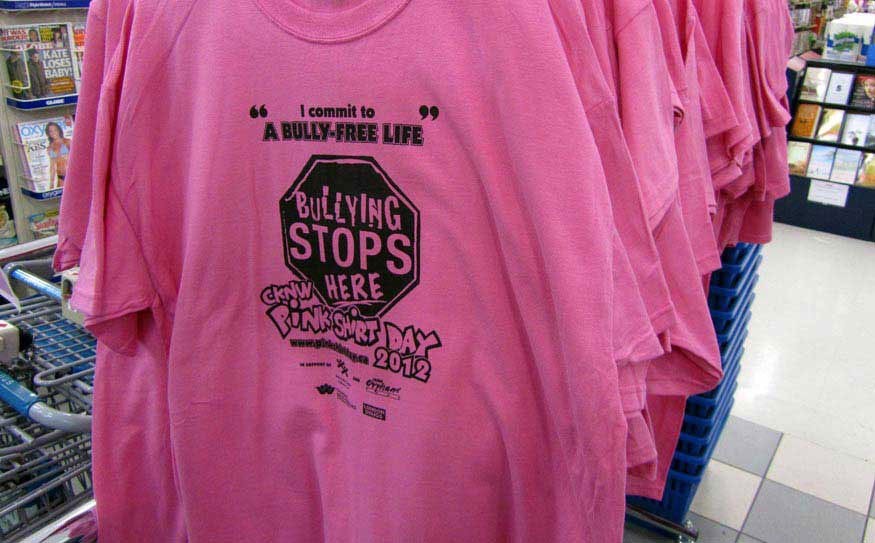 This Wednesday, Feb. 27 will mark the seventh year since a pair of high school students from Nova Scotia handed out pink tank tops to their classmates as a challenge to the bullies that had tormented a Grade 9 boy for wearing a pink shirt. The movement has since spread across Canada and into the U.S. as part of anti-bullying programs.

In the Sea to Sky School District, Pink Shirt Day is an official event. While programs have existed for years, the suicide of 15-year-old Amanda Todd of Port Coquitlam last October pushed the issue to the foreground. Todd made a video before her death describing how she had been abused and bullied at school and online.

"Awareness is way up with kids and with parents, and we certainly saw an increase in anxiety around bullying in the months following Amanda's death, and kids and parents are more attuned to it," said Ian Kent, assistant superintendent of schools for the school district. "The Pink Shirt Day is going on in most schools as well as at the board office, we'll all be wearing pink as well, and one school is doing a workshop for students on developing playground leaders, and training them what to do around recess and lunch.

"You have to start early. If the first time students hear about anti-bullying (programs) is in high school, then there's a problem."

While Pink Shirt Day is not an official school event, Kent said that all of the schools and staff are supporting it and it's part of the curriculum. "Bottom line, kids have to feel safe when they come to school."

As well, schools and students are being encouraged to use a new provincial reporting tool called Erase Bullying (www.erasebyullying.ca) that was created after Todd's death, which encourages students to tell someone if they're being bullied or to make an anonymous report.

A police officer and expert on online "cyber" bullying has visited local schools and Parent Advisory Councils (PACs) in recent months to educate parents and students on online risks, as well (see Pique Jan.17, 2013 for story).

The school district doesn't currently track bullying incidents because all cases are different and are handled individually, but Kent said they are looking at ways to monitor the situation and show trends.

Bev Oakley, principal at Whistler Secondary School, said students are making the greatest difference by challenging bullies. She pointed to a video made by Grade 12 students last year in response to a bullying incident at the school, and said students are more likely now to speak up.

"Someone was bullying another student on Twitter, so it was not a nice scene," she said. "What we were seeing in the past was that a lot of students would observe bullying taking place, and there was some fear around supporting the person being victimized because they were afraid the bully would turn their attention to them. But now with Pink Shirt Day and Amanda Todd, a lot of students understand that they have the power to stop this. It's positive peer pressure in a way."

As far as numbers go, Oakley said they do have files of bullying reports but she hasn't seen any major changes in recent years. However, she would like to see the number of reports increase, because it means that bullies are being reported.

"I would say that we wouldn't want (reports) to decline because what we're doing with these anti-bully programs is shining a light on the process of bullying with the goal of having students report it if they do observe it or are victims of it. So I would hope that reports would go up," she said.

Whistler Secondary hasn't received any reports through the provincial system yet, but given the size of the school she said most kids feel comfortable reporting incidents to teachers and staff.

The school also doesn't consider reports of bullying outside of school hours or off school property to be beyond their reach, said Oakley. "If a student is being bullied online and both students go to the school, then it is a school problem," she said.