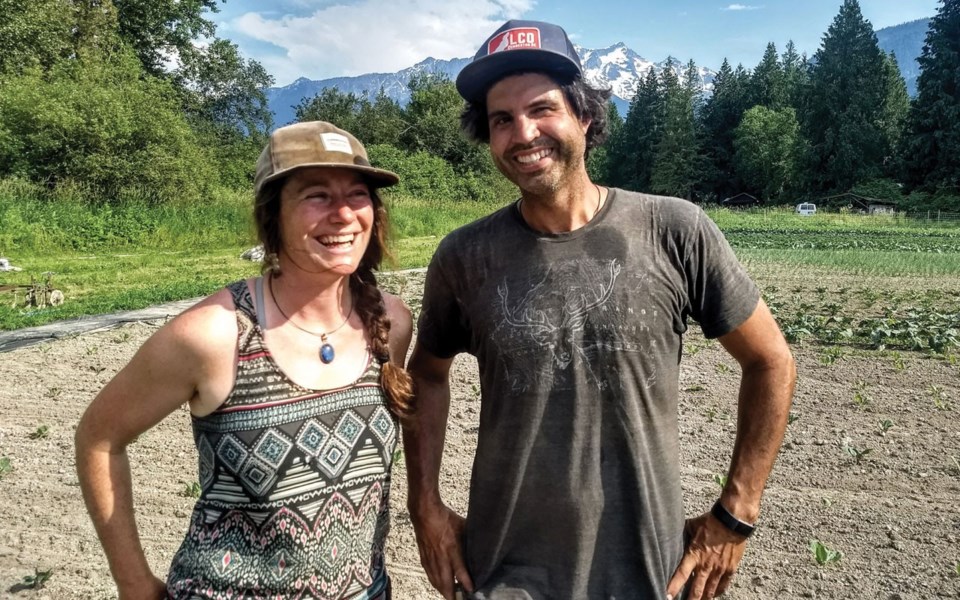 Seven years ago, he moved into a cabin on the property, which sits on Pemberton Meadows Road, and was "inspired" by the owner who had a small plot of garlic.

Budgell, a die-hard skier, decided to pick up a book on farming and try it out. He quickly realized it was an extremely tough undertaking.

"But then Kerry (McCann) moved in next door, and we talked about giving it a shot. And that's how we started this arrangement."

Budgell and partner McCann decided to make a go of it, and leased land on the property where he lived to start.

But the budding farmers quickly outgrew the available land and began looking to their neighbours for idle farmland.

"I approached (the neighbour) wondering if she would be up for it, and she was pumped," recalled Budgell. "She was like, 'Oh, I was kind of hoping you'd ask!"

This year, the business partners are also leasing from the Miller family, a multi-generational farming family that recently opened a microbrewery on their farm, which is located just up the road from Laughing Crow Organics farm.

In addition to being a solid spot for growing vegetables, the land is poised for agritourism, said Budgell, adding, "The sky is the limit."

According to the business partners, leasing land rather than owning it has both positives and negatives.

Agricultural land in the Pemberton area has seen a sharp rise in value in the last several years and Budgell and McCann both feel that buying is now out of reach. (A home on a five-acre lot in Pemberton Meadows can cost upwards of $1 million depending on location.)

They tried to buy their own farm in the area several years ago, before prices really took off, but were unable to make a deal that worked.

Not owning their own property can hamper growth since their hands are tied when it comes to investing in major infrastructure, for example.

"Our wash station is a shipping crate with a roof on it—we don't have a barn," said McCann with a big laugh, by way of illustration of the problem.

Moreover, Laughing Crow Organics isn't sitting on an investment that is appreciating under its feet, and the leases they strike don't offer the same security that land ownership does.

"In a market like this, where the market is changing so much and growing so much, people don't want to get locked into having someone on their land too long," explained Budgell.

On the positive side, he said: "(I'd) be lying if I didn't often think, well if this doesn't work out, I'm not stuck paying this mortgage."

Laughing Crow Organics does a brisk business, and the partners have invested in capital, including tractors, trucks, and greenhouses.

They can be found weekly at the Whistler Farmers' Market and also run a food-box delivery program.

Down in Squamish, Nutrient Dense Farm is also making a go of it by leasing an urban plot in the District of Squamish, as well as land 20 minutes away, in the Upper Squamish Valley.

Husband and wife owners Stefan Butler and Lindsay Cornwell, a holistic nutritionist, are now looking to buy their own farm, even if it means moving out of the Sea to Sky region.

"We want to live on our farm," said Butler.

"We're looking for a more permanent move somewhere, where we can live on the land and have the security to build the infrastructure we need."

Though they have a successful business model, they've had to move three times in the past 10 years, and buying in the Sea to Sky region is now out of the question.

"It's all just so expensive," said Butler. "We might have been able (to purchase) maybe five years ago, but we weren't ready at that point."

According to James Vercammen, a professor in the faculty of land and food systems at the University of British Columbia, farmers leasing land is nothing new, especially in the prairies and the U.S., where farmers would traditionally crop share.

Landowners, who were farmers, would often allow other farmers to till their land in return for a cut of their crops.

"That operated quite well for a while because people shared the risk," said Vercammen. "If it was a bad year, you'd kind of share it. But that kind of went out of fashion in the U.S. Now it's pretty much cash-rent."

Vercammen said that leasing is common in the prairies, where large foreign corporations are getting around foreign ownership laws and buying large properties for speculation purposes then renting them out.

This partnership can work to the advantage of both parties he said, if the market is fair and there is security for the farmer.

"If you have really expensive land to buy, you're not going to build up much equity, because it's way overpriced and renting might be just as affordable," said Vercammen, noting that the cost of owning land, when interest is factored into the equation, could be comparable to the cost of renting.

"It's frustrating for these farmers, because they see a lot of this land is sitting idle," he said.

Despite the challenges, farming is seeing somewhat of a renaissance in the Sea to Sky, with the rise of food culture and an educated, affluent population that is happy to pay higher prices for farm-fresh kale, arugula and other produce.

Over the years, Budgell and McCann have been joined by other small-scale farms that sell at farmers' markets, including Four Beat Farm, Plenty Wild Farms, and Blue House Organics.

Reflecting on the camaraderie that has developed, McCann said she's happy to be farming in the Pemberton Valley.

"We feel very fortunate to have a community of farmers around," she said. "It's a bit of a crazy job, and to have other people to talk to occasionally (is great), even if it's just to exchange horror weeding stories."

On a personal level, McCann is thrilled to be making it work, living the farming dream in Sea to Sky country.

"It's something I enjoy and feel good about," she said.

"I feel like steward is a heavy word—but we are doing something that isn't creating a negative impact on the land."