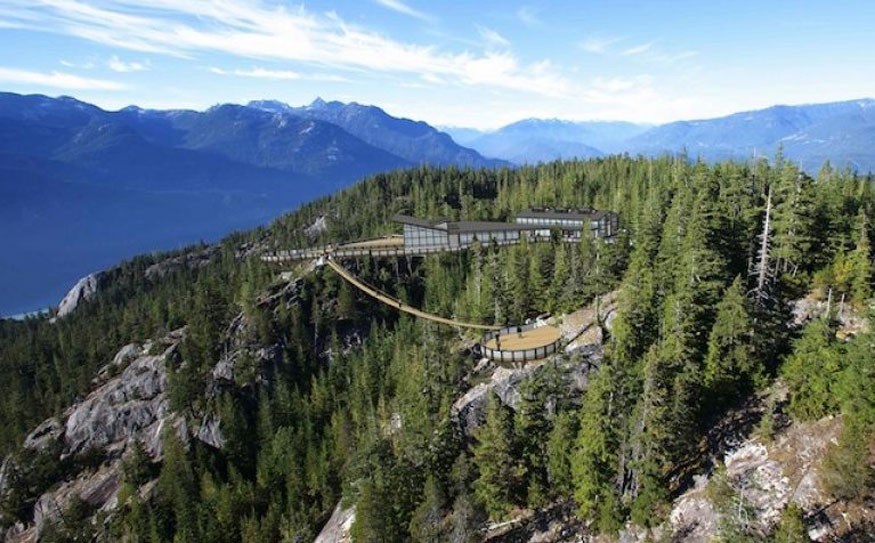 Valley View An eight minute ride on the Sea to Sky Gondola will take people up 853 metres to experience spectacular views of Howe Sound. Graphic submitted

Construction of Sea to Sky country's next big adventure is well underway. The Sea to Sky Gondola in Squamish between Shannon Falls and Stawamus Chief Provincial Park is scheduled to begin operations next summer and possibly as soon as spring 2014.

According to Faulkner, much of the lift system installation work will require the use of helicopters.

Trail construction associated with the project is also taking place and Faulkner said the trail crew is discovering that the terrain is better than expected for hiking.

Construction is on schedule and even ahead of schedule in some areas, he said.

"They are big... the same kind of quality build to the Peak 2 Peak," said Faulkner of the gondola cars coming to Squamish.

He noted that the gondola openings are large enough to accommodate wheelchairs and strollers.

"They're floor to ceiling glass so the views are certainly beautiful," Faulkner said. "Its kind of like this glass bubble almost that you're moving up in, with comfortable seats, so it's quite cool."

Up at the top station Faulkner said the trail construction contractor, Dream Wizards, has roughed in two interpretive trails.

"The construction of the suspension bridge is starting this week," said Faulkner of a bridge that will connect the top terminal area to a viewing platform.

The top terminal at 853 metres (2,800 feet) above sea level will include cultural exhibits, event space and what the project proponents describe as "signature dining."

Faulkner said that when the first gondola whisks the first visitors up the mountain he expects the attraction will have a staff of 70 people.

"(For) our first critical hire, which is mountain operations manager, we'll be making an announcement on that pretty quick," Faulkner said. "We'll be adding additional staff through the fall, mostly on the management side. In the new year is when we'll hit the ground running and start bringing people on faster."

The quality of people who have expressed an interest in working for the gondola operation has been impressive, he added. Faulkner said the "University of Whistler" has produced people with many of them getting most of their experience from working with Whistler Blackcomb.