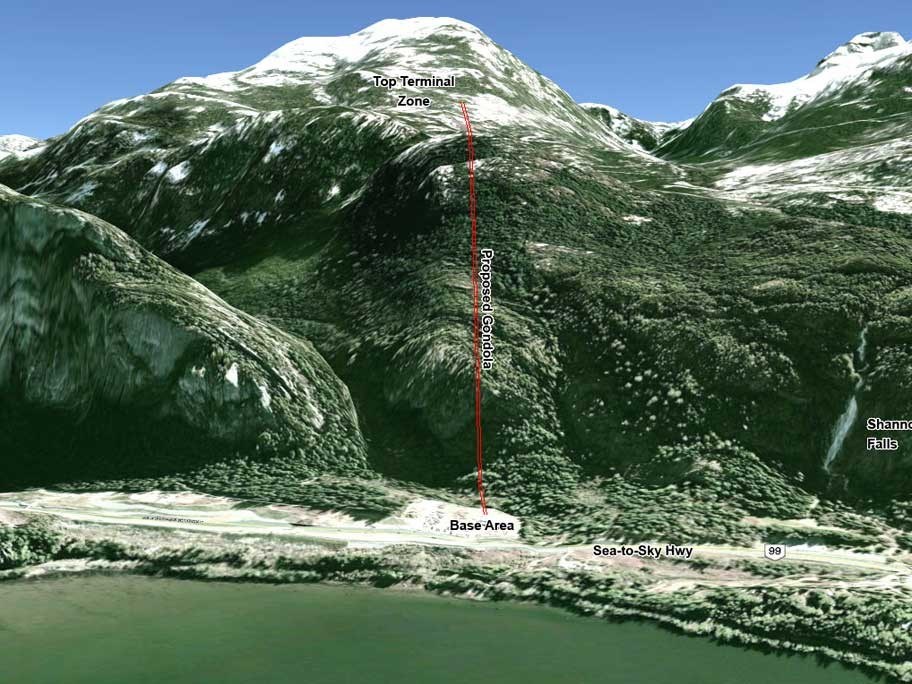 The District of Squamish (DOS) has removed the biggest local government hurdles for the gondola proposed for the area between Shannon Falls and Stawamus Chief Provincial Park.

On Tuesday (Feb. 7) the members of Squamish Council adopted changes to the Official Community Plan and they also adopted a comprehensive development zone bylaw for the property where the gondola base is to be located. The two key adoptions come following a series of public information open houses through 2011.

The project proponents still have to get development and construction permits from the DOS and planner Sarah McJannet said those wouldn't be issued until the project leaders have the approvals they need from three other levels of government.

"This project will require Squamish-Lillooet Regional District rezoning for the top terminal, a B.C. Parks use permit as well as Crown Land tenure in the form of a license of occupation as well as Ministry of Transportation and Infrastructure highway access permit," said McJannet.

The DOS only has jurisdiction over the land where the base terminal is planned and that land was formerly used by Kiewit and Sons as a base of operations for its highway construction operation while Highway 99 was being improved before the 2010 Olympic Winter Games.

From that point the gondola path is proposed to pass over a small portion of Stawamus Chief Provincial Park then land 823 metres (2,700 feet) above Howe Sound on a bluff looking over the sound and across to the mountains on the other side of the valley.

The project drawings show the highway access will be right in and right out, meaning southbound traffic accessing the site will have to drive past the site to Shannon Falls Provincial Park, turn around in the park to drive north to the entrance to the parking lot.

The parking lot as proposed would hold 357 cars and seven buses.

The company behind the proposal is GroundEffects Development Inc. It plans to build a small restaurant at the base, along with a retail store, and install an eight passenger enclosed gondola cabin that will accommodate wheelchairs and strollers.

"Could I just ask when the excavators are going to show up there," Councillor Ted Prior asked once adoption was finalized.

"There's a few more approvals to go through before we get there," said Mayor Rob Kirkham.

Kevin Ramsay, Squamish's Chief Administrative Officer, said the proponents were asked to come back before council in a few weeks to give an update on their progress with the other approvals the project needs before construction can begin.

For a graphic of the proposed gondola project visit www.piquenewsmagazine.com.

The council chambers were packed with young soccer players and their coaches anxiously awaiting news about the artificial field project proposed for Squamish.

Council voted to spend just under $14,000 so detailed design work on the project can continue.

In discussion leading up to the approval, the council members made it clear there are concerns that the artificial turf field project for Brennan Park is taking place independent of a parks and recreation master plan exercise currently underway.

DOS staff told the council members that a go-slow approach to the project is appropriate because a grant application with the provincial government specifically indicates project funding won't be granted if construction begins before the grant is announced. Ramsey said he spoke recently with a government representative who said a determination on the grant is expected in March.

Part of the funding for the field project is expected to come from a $750,000 sport legacy fund created by the 2010 Vancouver Olympic Organizing Committee in recognition of Squamish's contribution to the Winter Games hosted by Whistler and Vancouver.

Councillor Bryan Raiser expressed his concern that volunteer organizations in Squamish are being asked to do the work of the DOS.

His concern stemmed from a decision by council to hinge support for the proposed Skookum Power Project on the feelings of the Squamish Off Road Cycling Association (SORCA), Squamish Dirt Bike Association and the Squamish Paddling Club.

The council members voted at a Committee-Of-The-Whole meeting last week to endorse the independent run-of-river power project contingent on the recreational groups concluding that they endorse the project.

"I don't feel SORCA and other volunteer organizations should be negotiating independent power project details," said Raiser. Other council members disagreed, so he was the lone vote against the motion to endorse the run-of-river project.