Squamish calls for safer highways after another lethal accident
Jan 13, 2018 4:40 AM By: Eric Thompson 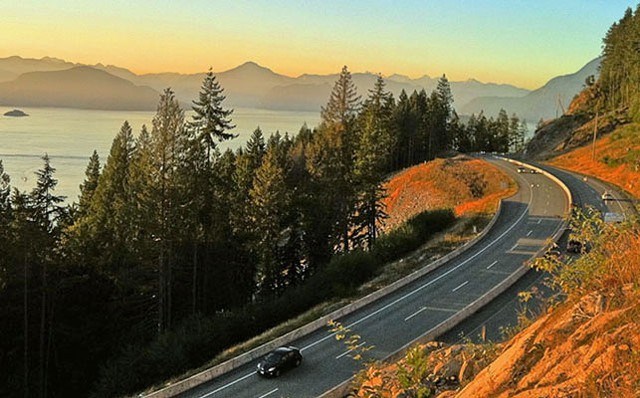 PLACING BARRIERS Some are renewing calls for increased safety measures on the Sea to Sky Highway after a fatal accident last week. File photo

The community of Squamish continues to rally in support of the victims of last week's deadly head-on collision along the Sea to Sky Highway.

The Jan. 2, early-evening accident claimed two lives. Officials have not confirmed their names but the community mourned the loss of Jasvir Bhatti, 55, on Tuesday, Jan. 9 and will hold a service for Daljinder Bains, 40, on Sunday, Jan.14. Another five men were injured in the van, two critically. Since the accident, Squamish locals and others have been lending money, time and emotional support to all the families involved.

"Our community always galvanizes when there's a tragedy amongst our citizens," said Squamish mayor Patricia Heintzman. "I'm not surprised at the generous, thoughtful and heartfelt way our community has reacted. It has happened in the past, it will happen in the future, and that's just how our community rolls."

The seven men were driving south from Whistler in a van when a northbound pickup truck driven by a single occupant crossed the lanes around Cheekye River, and collided with them.

Many of the victims are the main income providers for their families. That includes one man who became a father just a few days prior, and whose wife was on maternity leave. Needing to take care of both a newborn and a husband, there is little time to worry about bills as well. That's where Amandeep Kaur Mann decided to lend a hand.

"It seemed the right idea because someone had to step up to help these families," said Kaur Mann. "It was a big tragedy with all the young dads involved, who have left children behind... All these things came to my mind and it was like 'someone has to step up and help these people out.' So that's the whole reason we started the GoFundMe campaign."

In three days, the campaign had already raised over $38,000. Initially, a fundraising goal of $25,000 was set, but after Kaur Mann talked it over with friends, and saw the support, they realized the affected families would need more. Their goal is currently set at $50,000.

"We didn't think we were going to get that far. It has been amazing how each and every individual has stepped forward, not only from the Indo-Canadian community, but the Squamish community as a whole has come forward to help. And now people from out of town are helping," said Kaur Mann.

With none of these men able to return to work for the foreseeable future, Kaur Mann says the plan is to meet with the families one-on-one and see what their needs are, once things have slowed down and they know the total amount of funds they're working with.

The community support has extended beyond financial backing. One of the victims lived alone with his grandmother, and while he has been recovering from injuries, members of the community have been taking turns driving her to the hospital and various appointments.

That local help has been there from the initial accident. Brian Loverin runs the Sea to Sky Road Conditions Facebook group, and he was blown away by the response of locals. Some were willing to offer up their houses to those stranded in traffic the night of the accident, while sharing the GoFundMe campaign in the group led to a big increase in donations.

"It's overwhelming... The streaming of support that's coming out from the community is unbelievable," he said.

The RCMP is still investigating the cause of the accident. However, that hasn't stopped a number of community members from calling for safety changes along the highway.

"These are the major accidents that are forcing people to come together," said Makhan Sanghera, president of the Squamish Sikh Society.

"But so many other smaller accidents happen along this road too. How many rear ends, or people who go into a ditch or into the rocks? We have to upgrade this highway."

Sanghera would like to see more medians along the highway to Whistler, and many seem to agree. A petition circulating online is calling for improved safety along Highway 99 from Squamish to Whistler, and currently has over 1,400 signatures.

Squamish has been rocked by tragedies along this highway before. In 2004, seven residents died in a head-on collision driving back from Whistler, north of Garibaldi Way, and a local man was killed in a 2015 collision around Callaghan Forest Service Road.

"We just don't know the exact cause of this accident yet," said Heintzman of the Jan. 2 collision. "We're obviously going to work with the province, work with the RCMP, work with the community to evaluate this situation, but also we're constantly looking at a variety of aspects of the highway to make it safer.

"Fundamentally, most accidents come down to some human or other element out of your control, so sometimes there's just nothing you can do. But we're going to do our best to make it as safe as possible."

Those looking to help can make donations at www.gofundme.com/fund-for-squamish-accident-victims.

And anyone with information regarding the collision, or the events that preceded it, is asked to call Sea to Sky Traffic Services at 604-892-6100.