Sea to Sky Liberal candidate responds to that video clip

Jordan Sturdy on not speaking up during Thornthwaite's characterization of fellow NDP colleague
Oct 13, 2020 3:27 PM By: Jennifer Thuncher 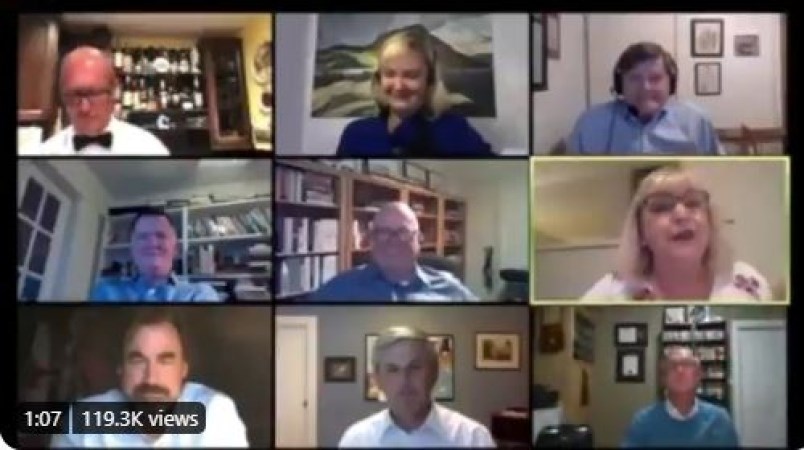 A screenshot from a Zoom

"I am not proud of not sort of leaping in there and saying, 'Jane, really?' which I think in a personal setting, might have been different," said Sturdy, reached at his home on Thanksgiving Day.

Liberal North Vancouver-Seymour candidate Jane Thornthwaite has said she's sorry for commenting on the physical appearance of Ma, the NDP candidate for North Vancouver-Lonsdale, at the event hosted by the Liberals in September and attended by the party's leader, Andrew Wilkinson, and other party members, including Sturdy.

In a statement on Twitter, Ma, said Thornthwaite "sexualized" her interactions with Sultan at a public event the two attended.

“Bowinn is a very pretty lady and she knows that she’s got ‘it’,” Thornthwaite said in the video as the rest of the group giggles.

Sturdy, along with his partner, Trish, and their daughters, operates North Arm Farm in Pemberton.

Sturdy added that in addition to being supportive of the strong women in his home, he also worked for his mother for years and that she has been "quite a mentor for me."

"Obviously, I support women and I think we need equality for everybody, in workplaces, in social settings," he said.

The roast allotted three minutes to each speaker, he said, and he did not have the microphone on when Thornthwaite was speaking.

Later Monday, Sturdy reached out to The Chief to say he had been mistaken. He rewatched the video, he said, and his mic was "probably on."

"I would be more likely to talk to a person one on one later than confront them in a Zoom meeting," he said in a text.

He went on to say he was likely more focused on his roast of Sultan than on what was being said by others.

“I was up next. I had never roasted anyone and my comedic skills are hardly legendary,” he said.

The video clip featuring Thornthwaite's comments was first published on Twitter on Saturday by Mo Amir, the host of a B.C. political and pop culture podcast.

Thornthwaite acknowledged in Twitter posts that her comments "fell flat and were inappropriate," and said she apologizes "unreservedly."

On Twitter, Thornthwaite also said that she had reached out to Ma to apologize directly.

"I have huge respect for all women who push through glass ceilings. I’m one of them. So is Bowinn Ma," Thornthwaite said.

Both women were members of the last legislature.

In her statement posted to Twitter, Ma said if society wants more women to enter politics, there must be a commitment to "creating environments that respect them."

"As a woman who has worked in male-dominated industries my whole life so far, I am sadly no stranger to casual sexism," she said.

"Like many women in these situations, I found myself making choices about the way that I act, dress, or carry myself to avoid sexist interpretations read into my interactions."