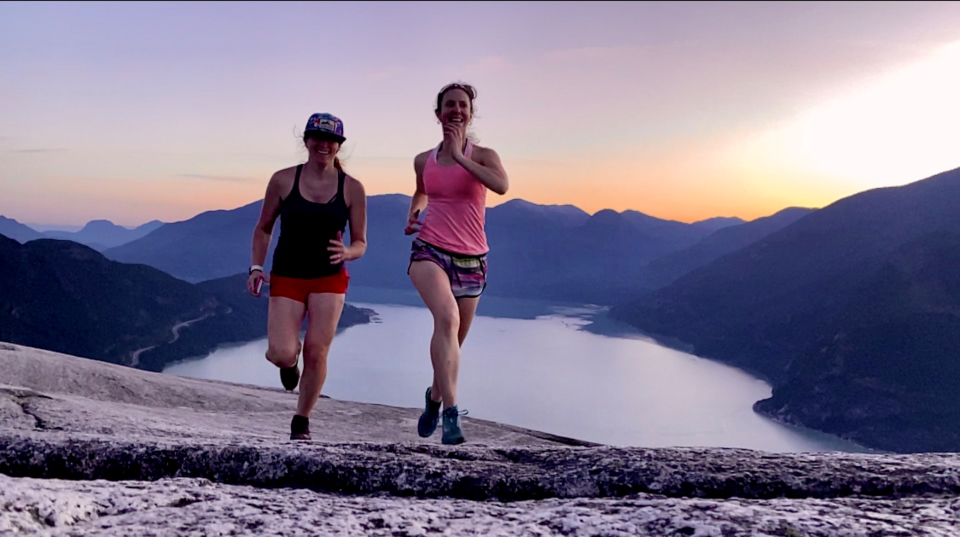 Riece Tosh (right) and Lindsay Wilson were among the first hikers to enjoy a sunset atop the Stawamus Chief after the trail reopened to the public on Monday. Photo submitted

After recently moving to Vancouver, Poonam Bhasin was eager to get aquainted with her new home province—and celebrate her birthday—atop the summit of the Stawamus Chief earlier this month.

That idea was squashed when some pre-hike research revealed the trail remained closed after shutting to the public in March amidst COVID-19 concerns.

Instead, Bhasin and her sister were two of the first hikers to tackle the monolith for a belated celebration when the provincial park’s Chief Peaks Trail finally reopened on Monday, July 27—“the perfect day for us to go,” she said.

They were also two of the first to access the Chief under BC Parks’ newly implmented free day-use pass system, requiring hikers to book a same-day reservation before they can hit the trail.

The new pilot program is intended to help manage crowding across six of the province’s most popular parks, including the Stawamus Chief, and the busy Diamond Head (Elfin Lakes), Rubble Creek (Garibaldi Lake) and Cheakamus trailheads in Garibaldi Provincial Park, the province announced last Wednesday, July 22.

Other parks now requiring day-use passes as part of the pilot include Cypress, Golden Ears, Mount Robson and Mount Seymour provincial parks. The amount of passes available each day varies from park to park, while trail users could face a $115 fine for hiking without a permit.

"People in B.C. love the outdoors, but some of our most popular parks are experiencing a high number of visitors, resulting in crowded facilities, packed parking lots and safety issues, such as parking along the highway," said B.C. environment minister George Heyman in a release.

"This pilot program acknowledges that frequent park users have an important role to play in protecting these important natural spaces and the species that depend upon them."

The passes are only available online through the Discover Camping portal beginning at 6 a.m. daily. Passes cannot be transferred to another date or location, or shared with anyone beyond the group reserved.

Some passes, for example the ones needed to access Garibaldi, are valid for the entire day, while passes for the Stawamus Chief trail are valid for one of two time blocks—a.m. pass holders must arrival before 1 p.m., while p.m. passes require holders to arrive after 1 p.m.

Day-use passes are not required for overnight campers, though a camping reservation is required.

Added BC Parks on its website, “The safety and health of visitors and staff is our priority and reservations allow us to open some of the high-use parks while maintaining visitor levels to prevent crowding on trails, ensuring visitors have an enjoyable experience, and allow for proper physical distancing.”

Bhasin said the new reservation system seems to be accomplishing its goal of limiting crowds—she estimates she and her sister only encountered a total of 30 other hikers during their visit to the park. She said the pair also witnessed “a couple of people” turned away by park rangers for failing to display a pass or confirmation number before embarking on the steep trail.

After some initial confusion about where to find the mobile link for the passes, Bhasin said she had no problem procuring an a.m. pass when she woke up at 8:30 a.m. on Monday.

Meanwhile, Squamish’s Riece Tosh said in an email that she was online at 6 a.m. sharp to reserve her pass—“As soon as I could,” she added. “I was pretty excited.”

Tosh, who runs the Instagram account @reclaiming_a_dream and said she would typically hike the Chief three or four times a week prior to its closure, called the booking process “a little difficult at first,” and noted she didn’t receive a confirmation email for her afternoon pass until 3:42 p.m.

Tosh added, “I saw no park staff at the checkpoint, but there was clear markings on the trail to have your pass ready … We were on the trail at dusk so I’m guessing they may have missed us in their rotation.”

For some parks, including Garibaldi, a day-use pass isn’t required for all trails—meaning if the park is open and your preferred trail or trailhead isn’t listed, you do not need to reserve a day pass to access it. In Garibaldi, this applies to both the Wedgemount and Singing Pass Trails.

In an email, a spokesperson for BC Parks wrote, "The status of Joffre Lakes Provincial Park and all parks and areas that remain closed will continue to be monitored," and pointed towards BC Parks’ ‘Frequently Asked Questions’ web page for more information.

In response to, “When will the rest of the parks open?” the website reads, “A number of parks and protected areas remain closed near vulnerable and remote communities or those that might experience very high visitor numbers.

“These will only reopen when it is safe to do so, taking into consideration the safety of the visitors and staff, impact on nearby communities, and protection of the environment.”

When asked whether she’d like to see this pilot program continue, Tosh wrote, “I feel strongly about physical activity and the benefits to individuals and families … I believe we should be respectful of others, care for our community and live within the current rules, however in the future I believe that any way we deter people from accessing the outdoors contributes to a inactive lifestyle and that’s not in line with my values.”

That said, Tosh added that she feels “very blessed to have access to this amazing trail. It felt really good to be back out on that mountain.”