Search and rescue comes to aid of one its own

Veteran volunteer expected to be back home this week
Jun 3, 2015 6:00 PM By: Alison Taylor 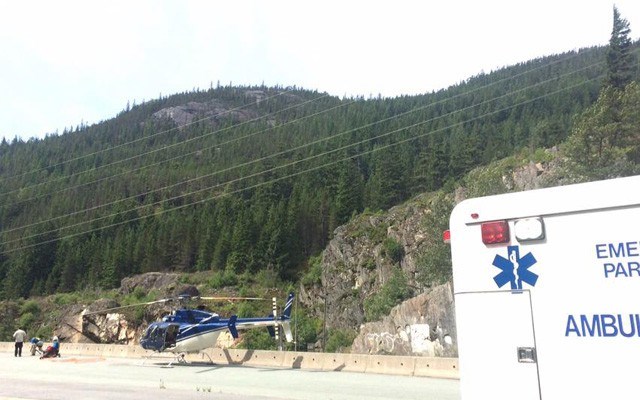 rock fall A search and rescue helicopter is seen on Highway 99 on Sunday, May 31. Photo by heather brown / facebook

Experienced mountaineer and veteran Whistler Search and Rescue volunteer Jai Condon is on the road to recovery after falling roughly 21 metres (70 feet) from a rockface which came apart in his hands and then sheered his safety rope on Sunday, May 31.

"He's doing very well," said wife Angela Rivers from Vancouver General Hospital after Condon came out of surgery Tuesday, June 2, following the accident, which left him with some broken vertebrae and a fractured wrist.

"It's a bit of a miracle," added Rivers.

The long time Whistler SAR member and experienced mountaineer was out for what Rivers described as a "low-risk day of sport climbing."

He was leading a 5.11 climb, a challenging and technically difficult climb, in the area east of Conroy Creek. His partner was below him, anchored into the rock, letting out the rope.

They were on a fairly remote route known as the Outpost, about a 45-minute hike through the forest.

Around 10:30 a.m. Condon was high on his route, about to make his next move, first testing the rock that he was going to pull himself onto.

"When he pulled his weight onto it, it just fell right off the face," explained WSAR manager Brad Sills, after speaking to his team member this week. "(The rock) immediately fell between his legs and cut the rope off, right below him. So now he was falling free.

"It cut it so quickly and so smoothly that the climbing partner never felt the tug on the rope. The first indication that he had of something going wrong was when Jai went screaming past him."

Squamish Search and Rescue responded by helicopter and were able to find a hole in the forest canopy. They were by Condon's side in just under an hour.

Among the team of 20 volunteers who responded were two advanced-life paramedics for BC Ambulance, who volunteer with Squamish Search and Rescue.

"He received the best service that you could possibly imagine," said Sills.

Condon was long-lined out of the forest and was transferred into BC Ambulance on the side on the highway. The highway was closed for the transfer and Condon was transported down the VGH.

"These were two very experienced people and they didn't do anything wrong," said Squamish Search and Rescue director John Howe of the climbers. "It's just a reminder of how dangerous the activity is and that people have to be aware of that."

Condon lives in Squamish with his wife and two children, but has been with Whistler Search and Rescue for roughly 25 years.

Sills tipped his hat to his colleagues to the south for coming to Condon's aid so quickly and efficiently, particularly the long-line extrication.

"That would have been a horrendous stretcher carry," said Sills. "Jai had three broken vertebrae so trying to manhandle somebody down through the bush for 45 minutes, there could have been some damage done to him. So that's why we have this tool."

WSAR has a mandatory recertification in long-line training this Saturday.

On a more serious note, he added: "That he lived through this is testimony to who is — he's a tough guy."

With files from Brandon Barrett