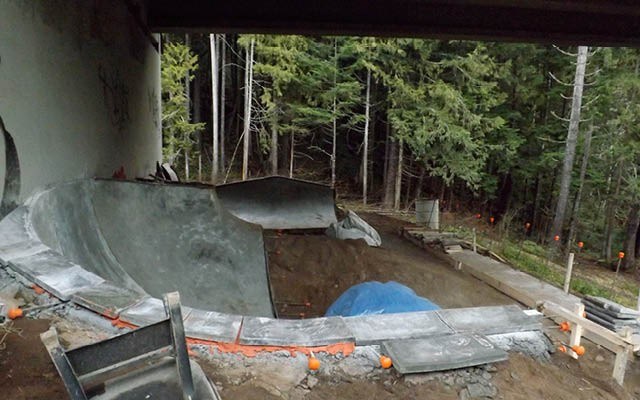 CONTROVERSY BOWL The District of Squamish asked the builders of a skate bowl under the bridge to Quest University to halt work after district officials learned of the project. Photo by John French

The fate of a half-finished skate bowl in Squamish is uncertain after word of the project started to spread, and nearby residents filed complaints with the District of Squamish.

The bowl is being built beneath the bridge over Mashiter Creek, the main access to Quest University.

Michael Quesnel, one of the people leading the construction effort, said the project started small as a simple skateboard ramp, but as work began the dream grew into a skate bowl with an estimated value of $150,000. The project is the product of a dedicated group of skateboard enthusiasts, which Quesnel described as mature.

"We've got a great group of volunteers that are all involved in this and everybody is putting their best foot forward to the project," said Quesnel.

The group of volunteers started work late last year with support from two of Canada's best skate park builders. A donation of concrete materials left over from a major infrastructure project allowed the scope of the work to increase, said Quesnel.

He admitted the enthusiastic group of builders launched into the project without seeking local government approvals. When the builders learned some residents in the area had concerns about the project Quesnel called Mayor Rob Kirkham and invited him to check out the work site.

Kirkham met Quesnel under the bridge on Friday, Jan. 17.

Interviewed after the meeting, Kirkham said he has concerns about the partially finished project.

"I applaud the volunteer spirit — that's what our town is famous for and built on," said Kirkham. "We still do need to make sure that what we're moving ahead with makes sense.

"One of the big things, obviously, is liability and insurance issues," Kirkham said.

"All of staff, the core leadership team, everybody that has a play in considering this as a go ahead, or not, are meeting to make sure we're addressing those issues," said Kirkham.

The builders were asked by the mayor to stop work until the issues were addressed.

According to Quesnel, additional work was done after the meeting with the mayor to address site safety for anyone who ventures under the bridge to check it out. That work resulted in a bylaw ticket being issued along with a $1,000 fine.

When asked if he plans to pay the fine, Quesnel said his group is going to work with district officials to find a resolution that works for everyone.

"There's lots of solutions to the problems we just have to figure out if they're attainable," said Quesnel.